Round 4:
America vs. Team America

Brian Kibler, wearing his National Champion medal, was comfortable in the feature match area as he shuffled up waiting for the feature match to start. Playing a Naya deck, where Birthing Pod can be a star—or simply an afterthought, he was looking to replicate the success he'd had in the past with such decks as his Pro Tour-winning Zoo deck, from Pro Tour Dark Ascension, and the deck that had granted him the title Dragonmaster, from Pro Tour Chicago 2000. As he shuffled, Kibler pumped himself up with his song of the tournament, "Can't Keep It In," by Tritonal. Rather appropriate given the three colors of his deck.

Kibler's opponent, Daniel Antoniou of Cyprus, had a little less in the way of experience. Cyprus has never before had a Worlds team, and as the champion of the island, he would be wearing his team's medal. Antoniou's first Pro Tour was Pro Tour Dark Ascension, but given the small presence of the team thus far globally, that was enough to make him their champion. Ironically enough, Antoniou had chosen to battle with a red-white-blue control deck dubbed "Team America." 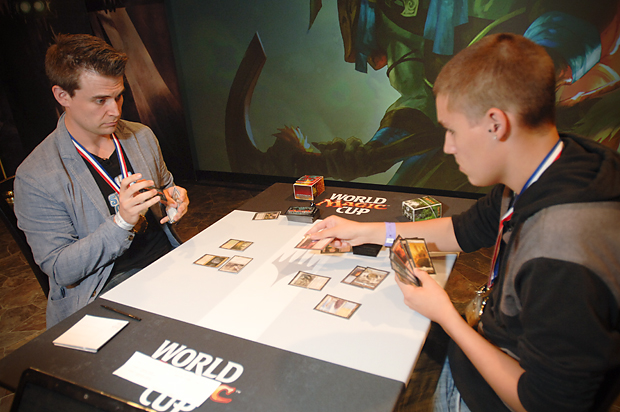 On the play, Kibler had to mulligan, but the captain of Team USA still had a turn-two Thalia, cast using a Cavern of Souls for added protection from countermagic. A Ponder was the first spell from Antoniou, whose red-white-blue deck mocked Team USA with a steady flow of lands, even as Kibler was stuck at just a Razorverge Thicket and Cavern of Souls.

Blade Splicer came down for Antoniou, and while Kibler had a Dismember for the token, he couldn't deal with Phantasmal Image making more creatures, nor with letting Antoniou swing in for plenty while he was stuck on just two lands. When Pillar of Flame got rid of Kibler's lone blocker, he was quick to scoop up his cards and move on to Game 2.

"I kind of needed another land there" smiled the American as he shuffled up for the second game. The Cypriot champion remained quiet on his side of the table. Cyprus is one of the smaller Magic-playing nations, and up against the biggest, he was keen to stay focused for the games that lay ahead of him.

Kibler had a mulligan for the second game, and was happy to see his opponent was also shipping his hand back and looking for six cards. 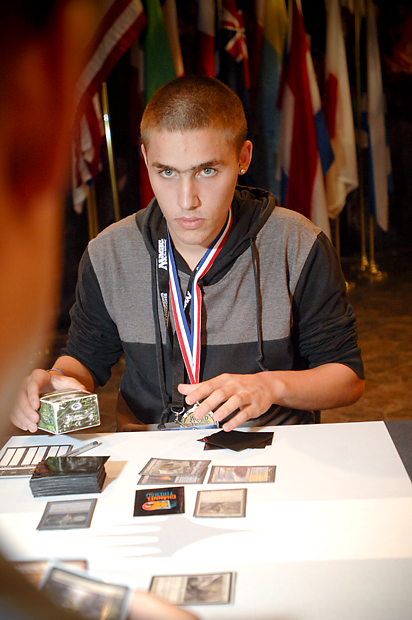 "At least we're keeping it fair this game" the Hall of Famer smiled, as each player kept their six.

Land was less of an issue Game 2 for Kibler, who had a turn-one Avacyn's Pilgrim, then a turn-two Borderland Ranger to fetch a Mountain. With Razorverge Thicket, Cavern of Souls, and the freshly proffered land, he was well set to cast most of his spells.

An early Thalia in Game 3 from Kibler fell to Pillar of Flame before it could get into the red zone, and soon a similar fate befell a Blade Splicer, although not before it had brought along a Golem buddy. With neither player having had to mulligan, it seemed we would have a great deciding game ahead of us.

Kibler played Cavern of Souls, naming Angel, which potentially signified problems for Antoniou. The young Cypriot seemed unphased, though, casting Thundermaw Hellkite and getting into the red zone. At the end of turn Kibler cast his first Restoration Angel.

When he untapped, a Birthing Pod sprung forth from Kibler's hand and was immediately used to upgrade his Restoration Angel into a Thragtusk. By now, Kibler was shuffling his hand around while thinking at lightning speed. Antoniou, a statue by comparison, cast Gideon Jura and used him to kill off Kibler's Golem token. Antoniou's Dragon traded for Thragtusk when it attacked the Planeswalker, leaving Kibler with just a Beast and his Pod. 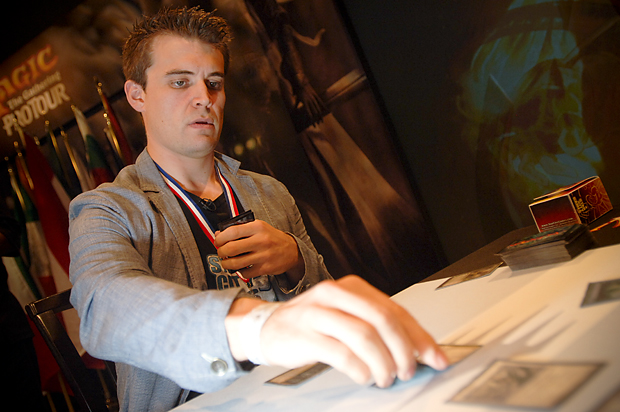 Brian Kibler puts his Birthing Pod to excellent use.

Brian cast Borderland Ranger and used his Pod to upgrade it to Huntmaster of the Fells. To this Antoniou used Snapcaster Mage to re-cast Pillar of Flame for the Werewolf. In each exchange, Kibler was gaining some card advantage, and it seemed likely this would gradually pull him ahead, even if it took a little time. Gavony Township meant that every creature Kibler had would be a threat, even if it wasn't fed to the Birthing Pod. In reality, most non-token creatures from the American were "leveled up" in their own way. An Elvish Visionary turned into Blade Splicer, gradually filling Kibler's board.

Antoniou was up against it and really needed Bonfire of the Damned to pull things back. The top of his deck gave him an Oblivion Ring, but that just wasn't enough.

4 Birds of Paradise 4 Avacyn's Pilgrim 1 Mikaeus, the Lunarch 2 Bonfire of the Damned

4 Ponder 3 Pillar of Flame 3 Bonfire of the Damned

4 Ponder 4 Pillar of Flame 3 Bonfire of the Damned