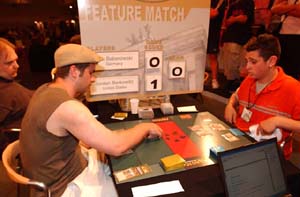 Jordan Berkowitz qualified for the Pro Tour via the PTQ system as recently as Pro Tour Yokohama. He needn't have bothered but how could he have known he would finish in the Top 4 at Pro Tour Venice. He has followed that up with another Top 4 finish at US Nationals. The former local standout was becoming the breakout player of the year. He became friends with Neil Reeves and even acquired his trademark toothpick. He was sitting at 4-0 here at the World Championships and was forgoing the toothpick for another powerful totem—William Jensen's player badge.

He would need the extra mojo this round. Where Jordan recently Top 4'd a Pro Tour, his opponent has won more Pro Tours than anyone except Kai Budde. While Jordan recently finished in the Top 4 at Nationals, his opponent is the German National Champion. Perhaps Jordan should be grateful he did not win the title. Dirk Baberowski has been besieged by the local media at the event because of his title and it is starting to wear on him, ""They keep asking me if I am going to be the World Champion and I tell them no but my buddy is."

Jordan opened with Mountain and Goblin Sledder and followed it up with a Piledriver. Dirk played his lands but had no action. When Jordan attempted a third turn Raging Goblin, Dirk used Mana Leak to keep the Piledriver from getting out of hand.

He fell to eleven on the next attack and when Jordan attempted a Sulfuric Vortex he had another Mana Leak. What he did not have were lands. "Sigh" was all he could muster as he sent the turn back without laying land number four.

What he was missing in lands he made up for in Mana Leaks and he countered a Blistering Firecat. He missed another land drop and Jordan was able to finish him off between his attack step and a Volcanic Hammer.

"Somehow this game of draw-go did not work out."

While they were sideboarding, Dirk smiled as he caught a glimpse of Jordan shuffling his entire sideboard in to his library and then removing fifteen cards. "That is far too much effort for me...I used to do it all the time when I was younger."

"Yeah, but I don't pay attention to that kind of stuff so you don't have to worry. It wasn't meant as a criticism."

While they shuffled, Dirk read the small text under their names on the feature match boards. "German Nationals? Is that to show how we qualified?"

Jordan laughed, "They should have included all the ways we qualified, Pro Points, rating—

"I don't think I would have made it in on rating. I don't have much of one anymore."

"Really? Mine's not so good either. I'm only sixth in the world in composite." 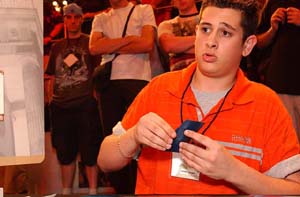 Dirk opened with a Krosan Verge and his opponent came back with a Raging Goblin which was followed by a Piledriver. Dirk had some early game after sideboard and he played his third land and an Anurid Brushhopper. Jordan shook his head, "He is good."

Jordan decided not to attack and played a Sulfuric Vortex—taking one from his Barbarian Ring in the process.

The Vortex started ticking and Dirk held his Brushhopper back for the time being.

Jordan played another Barbarian Ring and a Goblin Warchief. He swung in with everyone but Dirk had the Moment's Peace. Jordan took another point from a Ring and fell to fourteen to Firebolt the German National Champion.

The Vortex ticked off two more life and Dirk went into action. He sent his Brushhopper into the red zone and Jordan began to scoop up his creatures anticipating the Wrath of God and he was right. Dirk saved the beast with a pair of lands.

Jordan took two and two more from his Rings to cast Warchief and Sledder. The Brushhopper ate a Sledder in combat. Jordan fell to six on his next turn from the Vortex. He sent in the Warchief but Dirk needed every life point he could cling on to and flashed back the Moment's Peace. Jordan already had Jensen and Reeves in his corner but he would need some powerful luck as well and out came the Gerard Fabiano hand towel. He attempted a Goblin Warchief post-combat to fend off the Brushhopper but it was Mana Leaked.

Jordan fell to three on the next attack step and went to one form his own Vortex. Even if he drew an answer, he could not cast it—half of his lands were Barbarian Rings.

Jordan started off slow and played a third-turn Goblin Warchief. Dirk played his third different basic land and grinned, "I'm the guy with the three color sealed deck..." as he played an Anurid Brushhopper.

Jordan Firebolted it. He paid one mana to play a Sparksmith and shoot it for the remaining two. When Dirk saved it by discarding two lands Jordan confirmed that he would not take any damage form his own Smith. He also played a Sledder and attacked for three.

Dirk tapped out on turn four to play Deep Analysis and decided to keep his Brushhopper back on guard duty. Jordan played a Sledder giving him four goblins to shoot Brushhopper. Dirk was done discarding and shrugged, "Looks like you got him."

Jordan was wary of Wrath and did not add to his round forces and merely swung in for four. Dirk was not happy with the board and when he had to flashback Deep Analysis he griped, "Can't say I am loving this..."

He played a Krosan Verge and sent the turn back with two mana open—a Forest and a Skyshroud Expanse. Jordan chose not to add to his attack with additional goblins because he was anticipating Moment's Peace. Dirk was anticipating it too but he tapped badly and could not make the green mana he needed to cast it. Instead he cycled Renewed Faith. Both players were besides themselves over the mistake. Dirk for not tapping correctly and Jordan for not realizing that his opponent had done so. 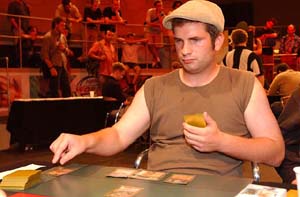 Jordan regrouped and wondered aloud, "Do the Germans have Transcendence? I don't think they do." He played a Sulfuric Vortex and Dirk dropped to four on the next turn.

"I can't believe how bad that last turn was," Jordan was still shaking his head. My mistake and your mistake. So bad!"

"Don't worry I am keeping plenty of mana available this time," sighed Dirk. He cast Moment's Peace and Cunning Wished for Ray of Revelation. But that forced him to wait a turn on the Ray and he had to go down to two. He played a Verge and shipped it back hoping for the best.

He flashed back Moment's Peace and the Barbarian Ring loomed large but Jordan had only one card in yard. After the attack he sacrificed a Bloodstained Mire to play a Goblin Warchief and after Dirk disenchanted the Sulfuric Vortex, Jordan sacrificed enough goblins to have threshold and Ringed Dirk for the final two.