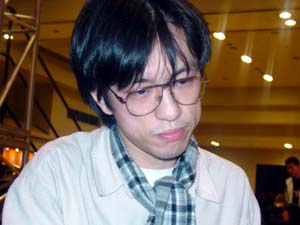 enough, Kai Budde hasn't won a Pro Tour this season. He came into this round at 4-0, and is in a good position to fix that anomaly. Momentum is certainly on his side, as he's coming off a huge Grand Prix win in Madrid last week, beating a record setting field of 1353. Tsuyoshi Fujita was the first Japanese player to make a Pro Tour Top 8, and some have him pegged as the man who will be the first Japanese Pro Tour Champion. He's currently 3-1 and got paired up this round, and a win here will go a long way towards helping him make a run at the Top 8.

Budde cycled a Chromatic Sphere and played Pyrite Spellbomb, and Fujita had no plays until turn four when he brought out Solemn Simulacrum. It died to Electrostatic Bolt, and Budde attacked for one with Blinkmouth Nexus, missing his fourth land drop. Fujita summoned Arc-Slogger, and Budde cycled another Sphere hoping to find a land, but it didn't come. He took a point of mana burn, and the Arc-Slogger shot him for more damage. A second Slogger followed, and Budde finally found a fourth land to play a Simulacrum. A Slogger shot it down on end step, and Pulse of the Forge got through the last points of damage. 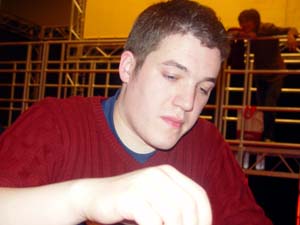 Budde mulliganed down to six. He cycled through two Spheres, played a Talisman but got mana stalled once again, as Fujita played a pair of Simulacrums. Budde had found a fourth mana source, but it was a Cloudpost and kept his development stunted. He used Fireball to kill one of the Simulacrums, and Fujita used two Molten Rains and Echoing Ruin all in one turn to completely destroy all of Budde's mana sources except one- a Fireball finished it.