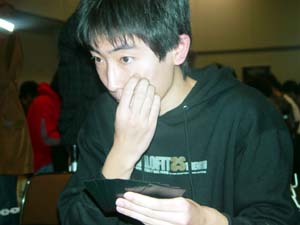 Bando played a second turn Pteron Ghost, and Oiso had a Myr. This let Oiso play Spire Golem on turn three, but Bando had one better- thanks to a Talisman, Arc-Slogger came out on turn four. Oiso attacked with the Golem, and made a Fangren Hunter. The Ghost and Slogger came through for five damage, and Bando added a Myr and Neurok Prodigy to his side. This was enough to put Oiso on defense, as he left his whole team back. The Slogger traded with the Hunter in combat thanks to Echoing Courage on the Hunter and a few shots from the Slogger. Oiso played a Tel-Jilad Archers on his turn that was nullified thanks to Psychic Overload, and his Golem was stopped by Arrest, as Bando attacked for three in the air every turn with his Prodigy and Ghost. Oiso was able to stabilize, using Echoing Truth to bounce his Arrested Spire Golem and replay it, giving him a much needed blocker. Shooting down the Fangren Hunter in combat with the Slogger had taken its toll on Bando's library, but Oiso was at four. The next attack brought him to three, as the Golem blocked the Prodigy, which bounced back to survive. With three cards left in Bando's library, Oiso played a second flying creature in Cobalt Golem- when Wizard Replica showed up a turn later, Bando conceded.

Bando had a first turn Viridian Longbow, and a second turn Pteron Ghost. He missed his third land drop, and Oiso played a Frogmite. Bando got his third land on turn four, and used it to play Leonin Skyhunter. Oiso's Juggernaut was destroyed with Oxidize, and the Skyhunter attacked for two. The defense kept coming though, as Oiso played Cobalt Golem and Tel-Jilad Archers. Stuck at three lands, Bando couldn't do much other than play a Talisman. Quicksilver Behemoth punished Bando's stalled draw a little more, and Bando tried to stabilize a bit with his own Archers. They could only block one of Oiso's attackers, while he took six. Even with Nuisance Engine providing a blocker for the Behemoth on the following turn, Oiso was able to push through two damage, bringing Bando to two life. Oiso played Myr Enforcer, and had just enough mana left to replay the Behemoth. Bando attacked in the air with his small fliers to deal three and bring Oiso to seven, then cast Creeping Mold to kill the Enforcer. This bought him a lot more time, as the Archers stared at each other, and the Behemoth was handled thanks to the Nuisance tokens. Bando was in no position to mount an attack now that Oiso's Archer was back on defense, but with a Longbow and lots of mana and creatures, it wouldn't be necessary. 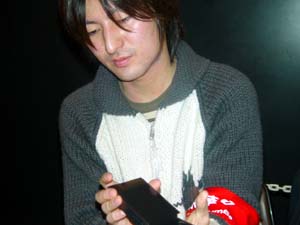 Bando had a good opening with Leonin Elder and Vulshok Morningstar, but Oiso had the perfect answer- Culling Scales. He played Darksteel Ingot on the following turn, along with Frogmite. The Ingot and Scales were a great combo, as Oiso could target the Ingot if there were no other options, keeping the Scales around and preventing Bando from playing anything that cost three or less without it heading to the graveyard in short order. Time ran out before Oiso could take full advantage, and the match ended in a draw.