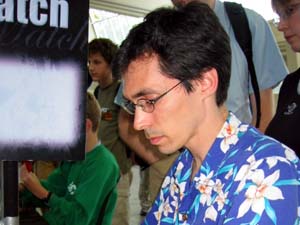 Pro-caliber players battling it out to keep their perfect record. The reason why they are up here, it's David. The Cinderella story from the European Championships in Milan a few years ago. A Canadian leaving in Switzerland on a scolarship he walked into a regionals for an afternoon of fun... and a few weeks later he was a National champion.

He managed to scrape the money together to travel to Milan for the European Championship, slept on a public garden on the first night... and reached the finals. Since then he hasn't done as well, but maybe today he'll be back to Top 8.

The first one to blink was Nils with a turn three Pulse of the Forge to the dome. On the following turn he dropped Thoren (Solemn Simulacrum). David flashed Tel-Jilad Justice.

Out went Thoren and in came a Viridian Shaman. Vermehren upped the ante with Arc-Slogger. David played his own Thoren but an Electrostatic Bolt and a Shatter later he had no blockers.

The Slogger lumbered accross the table to hit him. Montreuil used Journey of Discovery to find his second Swamp and played another Viridian Shaman. The Slogger shot it out of the way, before slapping David around again.

He played Death Cloud for one. The Slogger shot him.

David: "Damn it, I forgot to do something important. I suck. That was very sucessfull."

Whatever it was, it probably wasn't ver relevant. Nils used Pulse of the Forge and Beacon of Destruction to finish the game on the following turn.

Nils had to mulligan but still fired out a first turn Serum Visions. David started with a turn three Troll Astetic, not the kind of thing a Blue-Red deck wants to see. He cheered.

On the following turned he played another one.

Vermehren battled on using a bubble to find his fifth land and unloaded Arc-Slogger. David dropped one of his wacky lizard tokens on Mirrodin's Core and sat back.

He used Shattered Dreams and murmured something about "another Arc-Slogger". His Trolls attacked and the Slogger slowed one of them down. Eternal Witness came in to bring back the Shattered Dreams.

The second Arc-Slogger entered the fray, but David was in an attacking mood. He sent the whole crew in. This time he didn't save the blocked Troll. That heralded Death Cloud. He did indeed play it, for four.

They played "draw go" for a while until Nils played Thirst for Knowledge, followed by Solemn Simulacrum. Montreuil found land after land until he topdecked his own Thoren.

Vermehren kept digging away with another Thirst and Serum Visions looking for a way out. He was at a mere one life from the Cloud. He found nothing and decided to hide behind Thoren. David attacked, and they traded. Then the former Swiss National Champion revealed another Death Cloud.

Nils took a few seconds to resolve the scry on his first turn Serum Visions and David was just too curious. He played Shattered Dreams to get rid of Wand the Elements.

He used it to find Solemn Simulacrum and reach the magic five mana. Viridian Shaman got rid of the artifact but Vermehren had another one.

Molder did indeed join the fray and the second Thoren was soon gone. Magma Jet took out the Shaman and Serum Visions let Nils shove some cards to the bottom of the deck.

He then played a THIRD Solemn Simulacrum. Montreuil played Journey of Discovery and used the extra Forest to power out Troll Astetic. Nils was in trouble.

Not only could he not easily handle the big Slug but the Troll was untouchable. David used Shattered Dreams to take a peek. 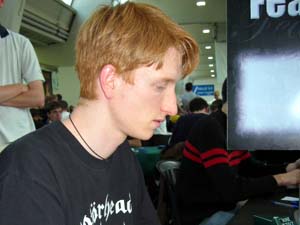 He took another Wand of the Elements and attacked. His Eternal Witness brought back Journey of Discovery. The Pulse evened the score a bit but Nils was basically just playing lands at this point, trying to maximize his Pulse.

Confidently the Canadian-turned-Swiss sent his crew in. Nils stared at the life totals. Finally he blinked: Electrostatic Bolt took the Witness out and he fell to six.

David: "I'll Death Could for six."