Round 5: AlphaBetaUnlimited.com vs. Potato Nation 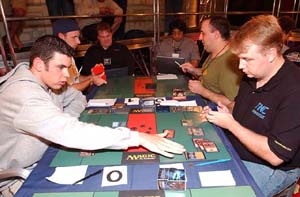 It doesn't get much better than this - the defending Pro Tour champs versus the defending Masters champs. Whenever anyone talked about favorites coming in to this tournament, they always mentioned Potato Nation and AlphaBetaUnlimited.com. Both teams were 3-1 when they sat down, with a 5-2 mark being necessary to advance to day 2.

Ryan Fuller really laid in to Gary Wise before the match: "I checked out the lifetime earnings . . . you've almost made half as much money as I have! That's great. How's your mom, by the way? You still live with her, right?" Gary replied that he's moving out on Wednesday. "You're what, 30?" "28." Fuller was also bitter about Wise's most recent Sideboard article, pointing out "If you only count odd Pro Tours and the occasional Grand Prix, you'd actually be ahead of all of us on Pro Points." Gary seemed pretty upset and muttered something about girlfriends and driver's licenses. He accused Fuller of being a cheater several times and it was very obvious to anyone within thirty feet of these guys that they simply do not like each other. Next door, Scott Johns was begging Chris Benafel to play faster. Fuller just kept laughing and Chris Benafel was snickering along beside him. Noah Boeken told his teammate just to win and to talk later. Fuller said he was going to do both. Meanwhile, Wise had turned quiet and serious. He mulliganed into a mediocre draw and Fuller's draw was quite good so game 1 was a slaughter. 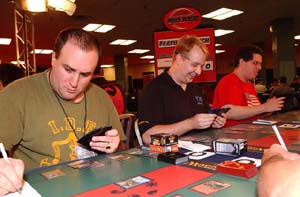 The sniping over time continued between Johns and Benafel. Benafel also learned the hard way that Zombie Boa's ability is played as a sorcery. He wound up with two mana floating and his Boa was eaten by a Phyrexian Gargantuan. Johns also had a Tahngarth so the tide was turning in game 1. Meanwhile Turian and Boeken had already split two games and were shuffling up for game 3. Johns did eventually claim game 1 after several consultations with judges by both players as they defended their own pace of play and complained about their opponent's.

Fuller spent game 2 pressing Wise for details about the ways Jay Elarar had "tooled him" at the Barcelona Masters and continued to make jokes about how Wise lives with his mother. Fuller even apologized to Wise's teammates for thinking they are jerks just because they teamed up with Gary. "That's just not fair of me," commented Fuller with dripping sarcasm.

Boeken played a doubly kicked Necravolver for the second time against Turian, and Turian didn't have any answer in game 3 either so the first match went to ABU.

Benafel was color screwed and Johns quickly evened the score at one match for each team.

Wise pulled out game 2 with a horde of fliers and a Hunting Drake then sent Bloodfire Kavu to the top of Fuller's deck for one crucial turn, preventing Fuller from sweeping the board and stabilizing the game. 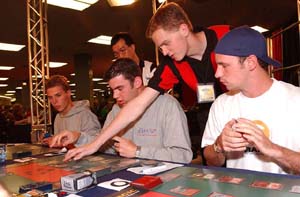 AlphaBetaUnlimited.com, drawing the attention of the head judge

The whole match came down to game 3 between Fuller and Wise. Fuller complained to Wise's teammates "Gawd, why'd you have to give your weak link the good deck." Wise fought back, but a bit less subtly, simply calling his opponent something unprintable. Quite a crowd had gathered by this point and everyone knew there was a lot at stake in this game. No one could really tell whether Fuller's talk had affected Wise or not. Fuller was clearly in his element, but he was so busy talking trash that he accidentally looked at his hand before declaring play or draw. That resulted in a warning and Wise got the option (he chose draw). By turn 4, the judge had heard enough and both players received a warning for unsportsmanlike conduct. All four teammates seemed to want them both to shut up and play. Fuller didn't even slow down. "How's your mom? Is your room next to hers?" Nor did Gary.

Wise played a turn three Silver Drake and began racing. Fuller cracked back hard with a Yavimaya Barbarian and a hasted up Serpentine. Wise was stuck on just three land while Fuller added more fat to his team in the form of Goham Djinn. "Thank god you made me play first!" Wise had no better answer than Faerie Squadron without the kicker. Fuller's Life turned all his land into creatures and ended things quickly. While Fuller's teammates were high-fiving him, Wise's were complaining that he shouldn't have trash talked back and he should have left up Exclude instead of continually tapping out in game 3.

Then came the random apologies - Fuller assured Turian that he didn't have anything against him or Scott Johns and Jay Elarar even came over to assure me that, while he does believe he beat Wise in Barcelona only because he distracted him with trash talk, he wasn't nearly as rough on Wise as Fuller had just been. 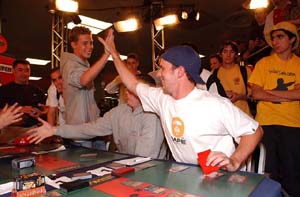 Like them or hate them, there is no doubt that the guys from ABU can flat out play. The energetic Boeken, the pensive Benafel, and the brash Fuller have put themselves in great position to make a run at Sunday.