As invincible as many of us think Jon Finkel is, it's incredible to note that one of the top players the world has ever known actually has a losing record overall against the field here at the Players Championship. Over his long and storied career, Shadowmage Infiltrator himself is just 5-11 lifetime against the other 15 players in attendance.

Much of the success he has had, though, has come at the expense of his round 5 opponent Shouta Yasooka. Finkel was 2-0 lifetime against the 2006 Player of the Year coming into the Players Championship.

Speaking of records (that's called a transition, boys and girls), both players had good ones coming in to their face-off in the feature match area. Finkel had dropped his first round of Cube Draft, but hadn't missed a beat since and sat at 3-1, tied for second just behind Alexander Hayne...the very man Yasooka had dropped his first match to the round before.

And while three victories don't make you a champion, it's better than three defeats. 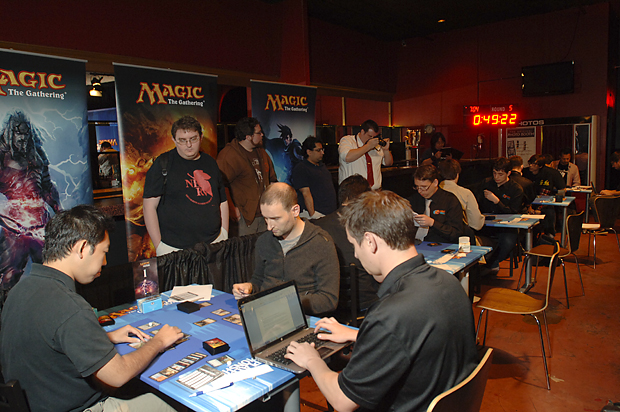 While Jon Finkel's record against most players in attendance this week was not above 50%, that wasn't the case against Japanese superstar Shouta Yasooka.

And if this round needed a little bit more panache, Yasooka is playing probably the most unique Modern deck in the tournament. His blue-red-green brew sports some of the normal fare like Snapcaster Mage, Lightning Bolt, Remand, and Tarmogoyf. He's also featuring a play-set of Æther Vial and some pretty sweet Thirst for Knowledges. In a room full of Zoo, Jund, and White-Blue, Yasooka certainly stood out.

Yasooka led with his signature Æther Vial on turn one, immediately giving him a leg up on tempo. And when Thirst for Knowledge dug up a whole bunch of goodies – including a Tarmogoyf he vialed on to the battlefield– Yasooka looked to be making some easy early game headway.

Finkel, though, played several man-lands and a Geist of Saint Traft to give him the ability to attack early and often...if he wanted to fight through any surprises Æther Vial might bring, that is. With cards in hand and counters on the Vial, that was probably a losing proposition.

One of those surprises came the following turn when Snapcaster Mage rebought a Remand that had been discarded to Thirst for Knowledge, pressing pause on the American's Kitchen Finks.

As a follow up, a Vialed in Vendilion Clique allowed Finkel to keep three lands, Kitchen Finks, and a redundant Geist of Saint Traft, and Yasooka seemed to be putting this one away. Any time someone looks at your hand and says "Yeah, you can keep all those," you're probably in trouble. 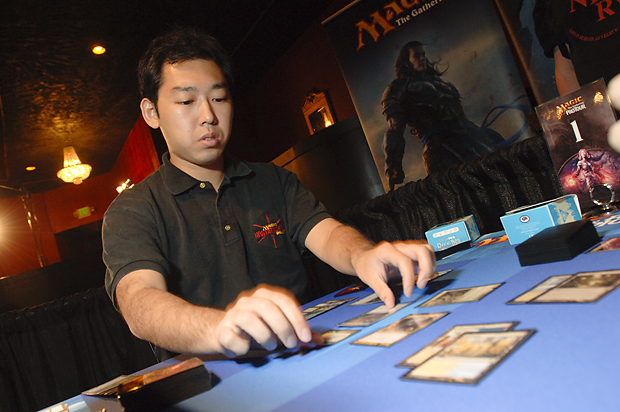 'Yeah, you can keep all those,' is one of the last things you want to hear from a player after they resolve Vendilion Clique.

Finkel did finally resolve the Finks from the previous turn to secure a more robust defense, but with Tarmogoyf and Vendilion Clique on the rampage, he was still very much in trouble.

Another Snapcaster Mage from Yasooka allowed him to Serum Visions and run out a Tarmogoyf, ratcheting up the pressure pretty much to 11. Finkel is a Magic mind like we've rarely seen, but this was a tough spot for even a genuine genius.

That, of course, was when Finkel attacked.

He suicided his first Geist into Yasooka's Tarmogoyf, but the Angel token and Kitchen Finks hit for 7 damage to take Yasooka to 15. Finkel reloaded with the second copy of the legend before passing the turn.

But the aggression was far too little, and way too late, as Vapor Snag cleared out Finkel's Mutavault before it could block, and the resulting horde was far too much for Finkel to handle.

Another game, another Æther Vial. But with only six cards, for each player, could Yasooka take advantage?

It looked like Finkel wasn't going to give him much time to find out. He aggressively started on Mutavault to get in a second-turn attack, then attempted a Vendilion Clique on Yasooka's third turn.

I say attempted because Yasooka was ready with the Mana Leak. He also had a second Æther Vial which let Yasooka diversify the set of creatures he could flash in at a moment's notice.

The first Vial brought in a Tarmogoyf that immediately started attacking while also leaving mana up for the Remand he would use to hold back a Restoration Angel.

Finkel used the opportunity to resolve a Vendilion Clique, forcing it through with Spell Snare as Yasooka tried the Vial/Snapcaster/Mana Leak sequence. 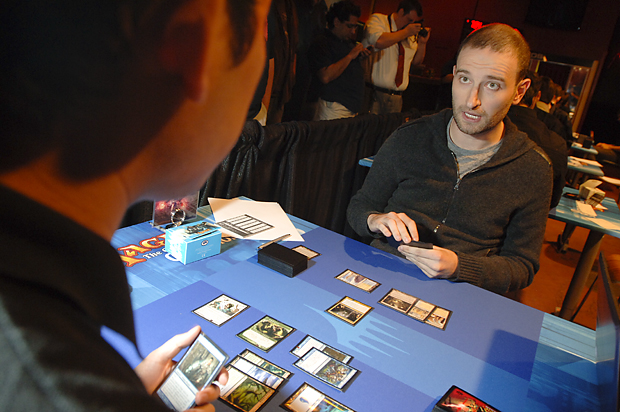 After pausing to consider targeting himself, Finkel instead opted to take a peek at his opponent's hand. He saw just land and Remand in Yasooka's hand, choosing Remand, but could only shake his head as Yasooka drew an Eternal Witness off the Clique draw to vial in, retrieving Remand once again.

The Witness traded with Finkel's Clique the following turn, but stuck on four lands and down to 9 life, Finkel was running out of ways to hold back Yasooka. The Vials were clearly giving the Japanese player a mana advantage that Finkel couldn't match.

What he could do, however, was flash in two Snapcaster Mages to trade with Tarmogoyf. Not exactly a profitable trade, but he was running out of options and needed to find more time. He even used Mutavault to trade with Snapcaster Mage the following turn. It was a costly series of blocks, but Yasooka had run out of steam and was no longer threatening Finkel's life total.

Serum Visions let Yasooka set up his library and a Snapcaster, off Æther Vial, of course, let him do it again. Meanwhile, Finkel used the opportunity to try a Restoration Angel, but found it Remanded before Combust removed it for good.

The writing looked to be on the wall as Æther Vial put Huntmaster of the Fells into play on Yasooka's next turn. And the fact that Æther Vial did the work and not Yasooka meant the Wolf flipped as soon as Yasooka passed the turn to the American.

Finkel drew, surveyed the board, and quietly conceded.