Round 5: Angels and Witches

American Gerry Thompson, 7-time GP Top 8 competitor (winner of GP–Denver) and hero of the people, faced down German Daniel Gräfensteiner, a new addition to the Pro Tour scene, in the arena. Gerry's Vampire deck was an interesting choice, well-positioned to take down the slower decks in the format with his heavy discard component. Daniel's deck was a hyperaggressive red-white landfall deck – bound to have some reasonable late game as well thanks to his Emeria Angels.

Gräfensteiner kicked it off with an Evolving Wilds, and grabbed a Plains to Thompson's Swamp. A second turn Steppe Lynx, never a happy occasion for its controller, came down for Gräfensteiner, followed by another Evolving Wilds. Thompson was unconcerned, making a Vampire Hexmage of his own off of a Verdant Catacombs.

Gräfensteiner tanked for a while and then laid a second Plains, attacked, and sacrificed the second Wilds (fetching Mountain) for 4 total damage, bringing it to 20-15 his lead. He finished the turn with a Kor Skyfisher, reloading his first Plains for another go.

Gerry laid down a second copy of the Hexmage, presenting quite the wall of first striking defense. Four points of power seemed like it wouldn't be enough to stop Daniel's fetch-land-powered Steppe Lynx as the German smashed in with both creatures, his Skyfisher now suited up with a Trusty Machete ... but the Lynx became horribly Disfigured and Gerry only took the 4 in the air, making it 20-11. 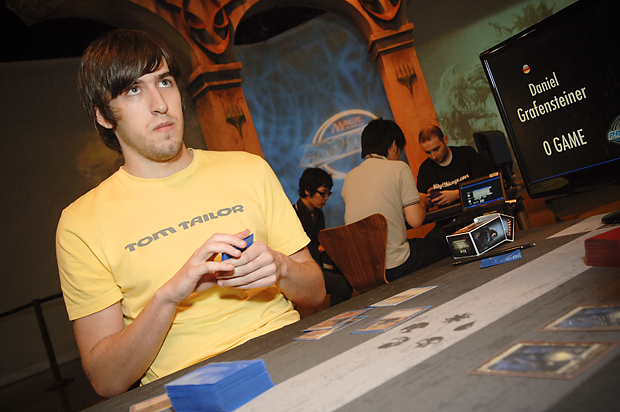 Gräfensteiner suited up Tuktuk with Basilisk Collar, ready to block, but Thompson didn't mind as he poured it on with Bloodghast and Malakir Bloodwitch. The huge 5-point drain left Gräfensteiner at 1 with few outs, and after a peek at the next card, he scooped.

The first nonland permanent on the board was a turn two Plated Geopede for Gräfensteiner, answered quickly by a Disfigure by Thompson. Vampire Hexmage was next to the slaughter, murdered by Gräfensteiner's lightning-fast Cunning Sparkmage. Not to be outdone, Thompson kicked a Malakir Gatekeeper to kill the Sparkmage, then kicked another to edict the Gräfensteiner's follow-up Kor Skyfisher. When the dust settled, Gräfensteiner was forced to pass and start taking beats from the Gatekeeper twins.

Daniel was down to 14 before he found Emeria Angel to keep the Vampires at bay, but the freshly cast Vampire Nighthawk from Gerry begged to differ. Daniel had an answer for that too, though, in Flame Slash.

Thompson had no fear. His bloodsuckers were on the prowl. He swung in again, and Gräfensteiner declined to block with his air force of Emeria Angel and two birds. bringing the life totals to 16-9 his favor when—all of Thompson's loss of life was fetch land inflicted to this point. The two birds swung in for "first blood," taking Thompson to 14, and Gräfensteiner reinforced his position slightly with a Steppe Lynx.

Gerry shook his head with a slight smile and plopped down Gatekeepers #3 and #4, leaving the board 4 Gatekeeper to 1 Emeria Angel and 1 Bird. Despite no further land to power the Angel, Daniel did have a second copy of the powerful landfall-bird-maker. Gerry watched the Angels and bird fly over and when the (kicked Burst) Lightnings followed, he was dead.

Gerry started off with two mulligans. He seemed unperturbed, however, and laid down a turn-two Vampire Hexmage off a fetch. Daniel matched him with a Plated Geopede, but took the damage on the chin, making it 19-18 in Gerry's favor.

The crack back was brutal, however: Teetering Peaks meant 5 damage from Gräfensteiner's 'Pede. Thompson had little follow-up, stuck on four lands and hurting from the mulligans. Gräfensteiner continued to pound on his American opponent with an Emeria Angel, then a second, with plenty of fetches to generate bird advantage. Even Thompson's Consuming Vapors couldn't stop the aerial beats, with only the Geopede and a Bird token taken out.

When Thompson conceded a few turns later, Gräfensteiner showed him "all these" Emeria Angels, adding a third from his hand to the battlefield. Thompson, not to be outdone, showed a fist full of Malakir Bloodwitches that would have quickly turned the tide ... if only he had a fifth land drop. 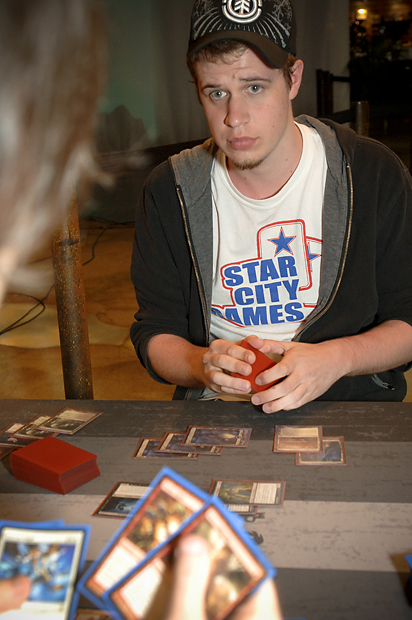