Round 5: Avenland Avengers Dortmund vs. $MIR 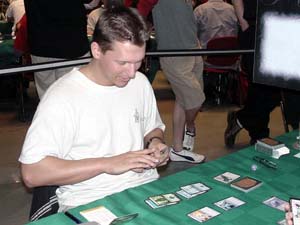 "This won't take long," Falk said as they sat down, letting slip he was taking it for the team and had been handed the sacrificial deck.

Bernhardt went first and managed only a turn three Yotian Soldier. Zink upped that by busting out a turn 3 Tangle Golem with the help of a Myr. Bernhardt set him back a turn with a Crystal Shard. It was only temporary as Oxidise removed the annoying Shard and paved the way for the Tangle Golem to return.

A couple of turns later the game was effectively over for Bernhardt. Zink dropped a Spectre's Shroud on the Tangle Golem then swung it in. Bernhardt blocked with both the Yotian Soldier and a Clockwork Condor hoping to trade. Zink was holding a Predator's Strike.

With both monsters dead and a card lost from hand and the Tangle Golem still alive there wasn't any way back for Bernhardt. He scooped as Zink cranked up the pressure with a Fangren Hunter

Bernhardt made a second turn Vedalken Engineer but didn't have anything to accelerate out, instead attacking with it and summoning a Neurok Spy. Zink had the Spectre's Shroud, but nothing to put it on.

Both players made artefact fliers, Clockwork Condor and Spire Golem, only for removal, Deconstruct and Oxidise to send them crashing to the floor.

Zink didn't really have anything and so Bernhardt kept nibbling with the Spy and Engineer until Zink at least kept the Engineer at bay with a Cobalt Golem. The Golem took up the Shroud and found only an excess land in Bernhardt's hand.

Zink summoned a Fangren Firstborn but needed to hurry. Another attack from the Spy dropped him to 3 life. Zink attacked back, smashing 9 life from Bernhardt's life total to leave him at 5. A Neurok Transmuter appeared to hold off the Engineer.

Bernhardt drew and didn't find a way to bounce the Transmuter out of the way for victory. He didn't even have the extra blocker he needed. An attack from the Spy left Zink at 1 life but that was enough. Bernhardt had to use the Engineer to cast a Sceptre just so he could cast the Quicksilver Behemoth in his hand. This still left him with only one blocker and he conceded in the face of Zink's lethal attack next turn. 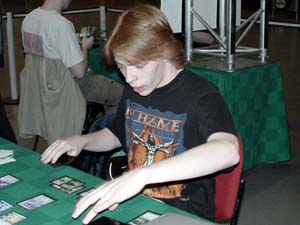 Currently Zink's team mate Andre Mueller was 1-0 up against Sören Kerner while the other match was tied at 1 apiece.

After writing up Zink's match I was about to go and follow the Seat A match between PT New Orleans Top 8'er Hans Joachim Hoeh and Ottmar Keil when Mueller announced a win in his match to give $MIR an unassailable 2-0 lead.

Keil got a consolation prize back by eventually defeating Hoeh but it wasn't enough.