Round 5: Battle of the Bad Decks

"The battle of the stinkers!"

Former U.S. National Champion Craig Krempels and Chris 'StrWrsKid' McDaniel are on the bubble, needing to win to be able to stay in. By the sounds of things, there was a pretty weak card pool.

Chris led with a Terrarion, which meant that he could play a Boros Garrison on turn two without having to discard. 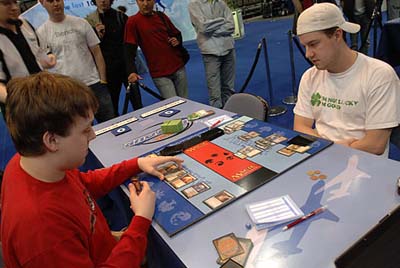 Each player claimed his deck was bad. Someone had to be round.

"Your deck has something going for it," remarked Craig dryly, as he played a third land and Freewind Equenaut. Chris just played a land and said go.

When Craig tried to play a Necromancer's Magemark on his flyer, there was a Lightning Helix to stop Krempels' fun.

Next up Krempels tried a Tattered Drake, but it too died to a Cackling Flames. Perhaps someone was slowrolling his deck's power a little?

Craig played a Moroii and it looked like it might stick. McDaniel did have Selesnya Sagittars though, making it look like more of a liability than anything else. A Guardian's Magemark from Krempels though was enough to make it a trade in the very first fight.

Moroii got to beat a little, while Chris played a variety of Karoos. He eventually worked out a way to play Gelectrode and Golgari Guildmage off them and passed. Craig beat in for a little, while Chris started to ping. Things looked pretty close. Looks can be deceiving, though. McDaniel tapped out for a Demonfire, which was enough to get Craig to scoop it up.

What happened? Demonfire happened. Craig had passed it to Chris, so he had to know that there was potential for death from out of nowhere from StrWrsKid.

Krempels again elected to go first, and had two swamps to power out a Rakdos Guildmage. McDaniel, meanwhile, made a Silhana Starfletcher off a Mountain, Island and Forest, naming white. His deck was pretty colourful.

Craig suited up his guildmage with a Guardian's Magemark, and swung for an unblocked three to take Chris to 15. Chris untapped and tried a Cackling Flames, but it was Krempels that cackled as Carom both drew him a card and saved his one beater. He attacked again the following turn getting Chris down to 12 and played a Tattered Drake, without any regeneration mana. The guildmage was always going to be the target though, and it got Demonfired from the game.

Krempels cracked in with his Drake, and had a second magemark to kill off the Starfletcher that blocked. Chris did have a Gelectrode, but when Krempels' reply was a Blind Hunter, there was a sigh of "must be nice" from StrWrsKid's side of the board.

An Izzet Chronarch got Chris back his Demonfire, but it wasn't an immediate answer to Craig's five power of attackers on the board, which took him down to 2 on the following turn. Chris drew and went straight to the scoop, as he had no answer.

"How do I beat magemarks?" remarked a dour McDaniel. The prospect of two being in play at the same time wasn't one that filled him with glee.

"If this wasn't a feature match I would probably keep this hand," declared McDaniel as he shuffled up to draw six.

There was a suspended moment of disgust as Chris looked at his 6. He went down to five on the play. 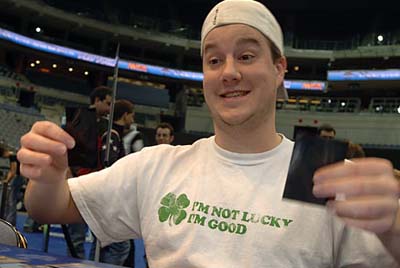 Krempels had options. Was he really happy? We'll see.

Chris did have plays though, as he got a turn-three Starfletcher out set at blue, setting him up on four colours. All that was left was for him to do something with them. He attacked with the Starfletcher and then played out a Scab-Clan Mauler with bloodthirst.

Craig had a Guardian of the Guildpact, but unfortunately it really couldn't guard him against a 3/3 Mauler.

"I cannot believe you got me. My mind is boggling right now," muttered Craig as he played a Freewind Equenaut.

StrWrsKid attacked with his 3/3 and faced a double block from Craig's team. Fearing a Carom, Chris assigned all the damage to the flyer, and played a Gelectrode and a Wild Cantor. Krempels attacked, then played a Skyrider Trainee. That is a good guy to magemark up.

Chris shot Craig with his Gelectrode and then played a thirsted Skarrgan Skybreaker. Craig untapped and responded with a Guardian's Magemark on Skyrider Trainee and a Blind Hunter. The life totals were 11 to 17 in Craig's favour.

StrWrsKid cracked back with his fresh 6/6 who killed a Blind Hunter, and was duly haunted by it. He then put down a Vedalken Entrancer and passed. Craig cycled a Carom on his Skyrider Trainee to stop any Gelectrode shenanigans or blocks from Starfletcher, and attacked in the air.

Chris went to 5 on the attack, and Craig played a second Trainee, giving an evil genius laugh to the crowd. All he needed was another magemark to make his flying monkey's lethal.

Chris went in with his Skybreaker uncontested, taking Craig to 11. He then played an Izzet Chronarch with no targets and passed.

Chris was forced to block Craig's Skyrider Trainee with his Starfletcher, and pinged Craig at the end of turn to take him to 10. With the Skybreaker on the board, that was a pseudo 6 life, Blind Hunter haunts all considered. Somehow Chris had to get the final couple of points. He attacked with his Skybreaker, who got shrunk by the guildmage, then triple blocked. Craig had no cards in hand now, and lost most of his guys in play, as damage was stacked, and then Skybreaker killed the enchanted Trainee.

With help from Gelectrode, Craig was left with just Guardian of the Guildpact in play, while Chris had Gelectrode, Vedalken Entrancer, Izzet Chronarch and a freshly cast Trygon Predator. At 2 to his opponent's 12, Chris still had work to do, but the amount of work was getting less and less each turn.

Chris played a Muse Vessel and passed. Craig played Pillory of the Sleepless on Izzet Chronarch and attacked with his Guardian. The Gelectrode died, but the Chronarch wasn't out of the game for long, as the Trygon Predator ate the Pillory on its next attack. The life totals wee 9 to 1 for Craig, and play continued with Chris whittling down his opponent, whose board was so far behind. A second Skybreaker sealed the game for StrWrsKid, and Craig Krempels was done.

Craig Krempels looks for something fun to do in Prague for the rest of the weekend. He won't have to look far.