to the beginning of this event, there was a rumor floating around the Pro community that Austrian Grand Prix superstar Helmut Summersberger was able to drag Kai Budde -the German Juggernaut, the man with seven Pro tour titles, the man with the most lifetime winnings - out of retirement to be on his team. While Budde fans may be sad to realize that didn't happen, Summersberger can't be dissatisfied with the results his actual team - "Servus", featuring former European champion David Brucker and GP Barcelona Top 8'er Sebastian Aljiaj - were putting up: four wins, zero losses. 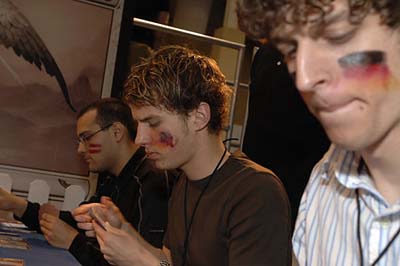 Perhaps their colorful face paint - each of the three wore the flags of their native countries (Austria, Germany, Germany) on their cheeks, most likely in support of the ongoing World Cup - was striking fear in the hearts of their opponents. In any event, their opponents in Round 5 would certainly not be susceptible to any form of intimidation.

Facing them in this round was "Shows up with dip. Dips" (I don't get it, either), a team featuring an actual former Magic star that had recently "unretired," two-time PT Finalist and two-time Masters Champion Ben Rubin. Rubin was joined by cathartic penman and Invitational finalist Jeff Cunningham and veteran three-time GP Top 8'er Morgan Douglass.

Cunningham came out with a Watchwolf against an opponent that discarded a Firemane Angel after a turn-two Karoo. The 3/3 was hit with Lightning Helix, but Jeff kept the pressure up with Selesnya Guildmage and Loxodon Hierarch, then dropped the hammer - Simic Sky Swallower - when Aljiaj tapped out for a turn. Glare of Subdual from Jeff meant that Aljiaj's Court Hussar and Firemane Angel would never make an effective block, and the game went to Cunningham shortly thereafter.

One seat over, Rubin and Summersberger were locked in a long, slow control battle, with neither player committing any non-mana permanents to the board except for the groves of Carven Caryatids on each side. No end was in sight. In seat C, Brucker won a slugfest, eking out the victory at one life with a Ghost Council on the other side of the table. Had Douglass drawn a creature on his last turn, the result would have been different.

The seat A game ended quite suddenly when Summersberger resolved a Sky Swallower to which Rubin had no answer. The Europeans were up 2 games to 1. 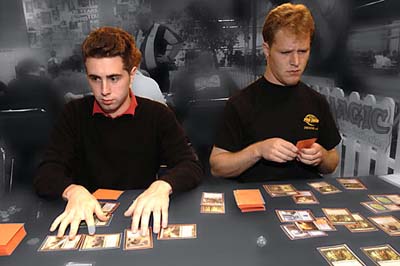 ffeJ and Ben show off their colorful personalities.

In Game 2, Cunningham played out a succession of threats - Watchwolf x2, Hierarch, Supply for three tokens. Aljiaj took hits on the chin while trying to stabilizing the board, and when the dust cleared, Aljiaj was at six life with Niv-Mizzet and a Dream Leashed Watchwolf in play to Cunningham's Watchwolf, three tokens, Court Hussar, and Selesnya Guildmage. Aljiaj dropped the elbow on the next turn, destroying Jeff's Utopia Sprawl-enchanted land with Seismic Spike, the pouring the red mana into a two-card Invoke the Firemind, which let Niv-Mizzet zap the Guildmage.

In the A seat, Rubin was regretting siding out his Caryatids when Summersberger's Giant Solifuge came bearing down on him, getting in three hits before he made the techy play of Copy Enchantment, making another Dream Leash and attaching it to the Solifuge. (Yes, that works. Ask your local judge!) Then it was Summersberger longing for his Caryatids, as the stolen Solifuge did him in all by itself.

In the C game, Douglass was reeling as Brucker's Angel of Despair took out his last creature (Teysa, Orzhov Scion), but then turned the game around by ripping his sixth land off the top, letting him play out back-to-back Skeletal Vampires.

When Cunningham finally conceded in the face of Niv-Mizzet, all three matches were tied at 1-1.

Game 3 started out poorly for Cunningham: a pair of Seismic Spikes crushed his early mana, and Aljiaj had a Firemane Angel in play before Cunningham threatened to do anything of consequence. Cunningham resisted the best he could with a Grand Arbiter followed by a Demand for Glare of Subdual, but the Angel hits added up, and Aljiaj finished the job with a large Demonfire.

In the A seat, Summersberger had gotten a significant mana advantage on Rubin, thanks in part to Wreak Havoc (no Stone Rain variant is unplayable in this format apparently). With that extra mana, he was able to play out Niv-Mizzet (yes, he was in two of their decks) and Simic Sky Swallower while Voidsliming Rubin's Simic Sky Swallower and Debtors' Knell. From there, victory was a formality.

As the crowd disbursed, Douglass and Brucker had a board full of Angels and Vampires and black and white tokens - no matter, Servus claimed the match with two wins.