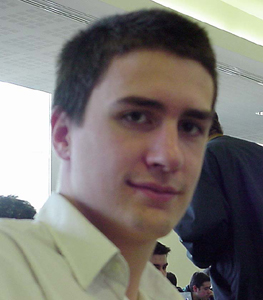 Jelger came into this match riding high after his Pro Tour Top 8 finish in New Orleans. Finally commanding the respect he deserved, he faced off against long time Pro player, Ben Ronaldson. Ben's results haven't been great over the past year, and as a result Ben is not qualified for San Diego at this point. It was all going well so far though, as both players entered this match with a 4-0 record.

Ben won the dice roll and elected to play first, but mulliganed his first seven cards, before keeping his six-card hand. Jelger decided seven was better than six and kept his hand. Ben drew first blood, with his second turn Crypt Keeper, while Jelger opened up his apparent black-red deck with a Shadowblood Egg and a turn three Sarcatog. Ben killed the Sarcatog with Patriarch's desire and continued the beats. Jelger returned the favor with his Pardic Firecat before passing the turn. Ben untapped, attacked, and restocked his hand with goodies from a Concentrate. Jelger then made a second Egg and tried to keep up in the card drawing race, using it to cast a Frightcrawler.

On Ben's next turn he attacked the Crypt Keeper into the Frightcrawler, ate a Shadowblood Egg from Jelger's graveyard before casting Gravedigger to get back the Keeper and recasting the 2/1 monster. Jelger used his own Crypt keeper on his turn to get back his Frightcrawler before recasting the scary 1/1. Ben sacrificed his Keeper in Jelger's end step to remove the second Egg before attacking with the Gravedigger and summoning Dreamwinder. It was at this point I realized what Jelger's problem was... His apparent inaction was caused by a massive lack of blue mana, despite having drawn a bunch of extra cards with Eggs and stuff. Jelger's screw continued for the next three turns, which is all it took for Ben, a Psychatog and a Dreamwinder to finish him off. 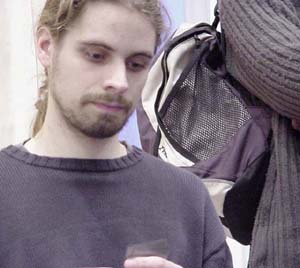 This game Jelger decided to begin, and opened with some blue mana and some black mana, although his hand was full of red cards... Six turns into the game, he had summoned a Dreamwinder and two Frightcrawlers, but it wasn't enough to hold off Ben's Psychatog and Roar of the Wurm token. Ben's Afflict on the Frightcrawler was enough to finish Jelger's last defense and deal the last points of damage on turn eight.

The morale of the feature match: if you don't draw the same color lands and spells, you'll lose.