Round 5: Ben Rubin vs. Katsuhiro Mori 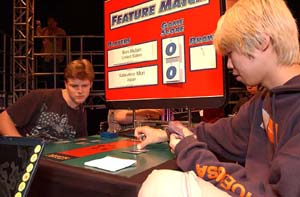 This round saw two superheroes do battle at 2-2. On one side was everyone's favorite Superman, Ben Rubin. His patience would be matched by the reckless abandon of Japan's version of The Flash, Katsuhiro Mori.

Sixteen extra minutes were awarded as Mori had to resleeve his deck, but then things started to happen. The two matched Compulsions, but Mori managed to resolve a Shadowmage Infiltrator. Rubin Madnessed a Fiery Temper to kill it. Mori came back with a Psychatog, and when Rubin mustered one of his own and a Cephalid Looter, Mori sent them packing with Aether Burst.

Still, Rubin was at twenty, in no danger of a quick Psychatog kill. Mori followed up with another Finkel. Rubin put on his thinking cap. He tried to Compulsion away Violent Eruption to stop Jonny Magic, but Mori was ready with Circular Logic. Rubin sighed, then used Aether Burst to reset Mori's team. Mori replayed Finkel and passed it back. 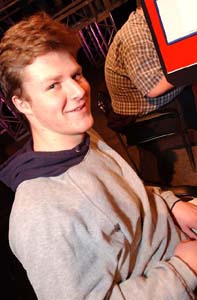 Rubin brought back his dudes, but Mori had yet another Burst to clear a path for Jon. Psychatog made another appearance. Rubin tried again to Compulsion away Fiery Temper, but Mori simply Compulsioned away Circular Logic. Rubin put a Psychatog in the way, but Mori had Chainer's Edict to dispatch it.

The frenetic Mori tried his best to remain calm while Rubin checked graveyards and worked out lines of play. Finally, Rubin drew into Upheaval, and made a try at a Psychatog kill. Mori used his Coliseum, then Compulsion, but he couldn't find a Logic to stop it. He didn't even wait for Rubin's discard step to scoop.

Mori had turn two Compulsion in the second game, but no third land. He didn't have to wait long to find one. However, his first two creatures, Patchwork Gnomes and Shadowmage Infiltrator met removal spells from Rubin. Rubin had meantime found a Compulsion of his own.

The two matched card drawers, Mori with Concentrate, Rubin with Deep Analysis. Mori got in with another Infiltrator. Rubin removed it with Violent Eruption. Next he played Upheaval with two mana floating, stopping a Circular Logic with Divert, then playing a land and Compulsion. 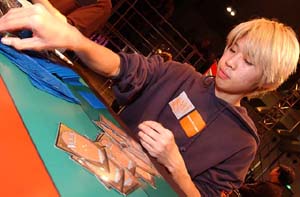 They rebuilt. Both tore through their decks with Compulsion, refusing to be the first to act. Rubin was going for the throat, though, sending Fiery Tempers right at Mori. Mori cracked, and played Psychatog. Rubin showed him a Logic. He tried a second. Rubin had Chainer's Edict.

And then, the death knell. Flaming Gambit brought Mori to six. Then Rubin asked him to deal with Psychatog. He had to tap out to fight past Rubin's countermagic, leaving him vulnerable to Upheaval. When Rubin showed him the second 'Tog, Mori extended the hand.