Round 5: Better Homes and Gardens

Four rounds in, both Paul Cheon and Chris Trembley sit with unblemished records, hoping to extend their current streaks. Chris managed to sweep his first pod with a strong Goblin deck that was a slightly stronger version of the deck he was sporting this round. Paul, on the other hand, took the Quentin Martin approach to the format. "I tried to draft blue-black prowl. I failed on the prowl part, but I had two Mulldrifters and drew them every round. That'll do it."

After rolling a twelve on two six-sided dice, Chris decided to play first. 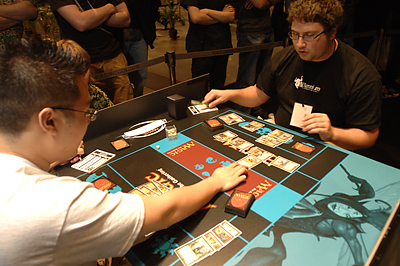 Paul Cheon knows that Chris Trembley is probably tired of puns based on his last name.Chris came out of the gates blazing. He won his clash on a turn-two Adder-Staff Boggart and followed that up with a Fire Juggler. Paul had a Smokebraider, but didn't manage to use it to do anything on turn three. Instead, he tried to jump in front of the Boggart with help from an Earthbrawn, but Chris had a Pack's Disdain to get the two-for-one.

Paul tried to get back into the game with a Sunflare Shaman and a larger-than-average Nath's Elite, but Chris had a gripful of removal that he just sort of vomited onto the table. Cheon's team, meet Moonglove Extract and Lash Out. I'm going to start wearing a poncho to the feature match area. Chris added a few more men to the table, and by this point, even the two-for-one Paul was able to get with his Spitebellows wasn't enough to get him back into the game.

"I probably should have evoked that guy earlier, but I didn't expect you to kill all my guys. I dunno, maybe if I took 5 the turn I blocked with Smokebraider, you would have been less inclined to kill it," Paul mused while sideboarding.

"I don't know," Chris replied. "Your play seemed fine to me."

Game 2 started out a bit faster for Paul. On his turn three, he played an Inner-Flame Acolyte, which pumped itself and swung in alongside his second-turn Woodland Changeling. All Chris had back for defense at this point was a Facevaulter and an unequipped Cloak and Dagger. I've heard stories that dealing 6 damage to your opponent on the third turn is part of a winning strategy.

Chris had a third-turn Fire Juggler again, but it seemed less likely that it would be attacking at this point than it did last game, even more so when Paul decided to Lash Out at it. That Lash Out also revealed an upcoming Vengeful Firebrand for Paul, which would just add to the unbridled aggression. Chris played a Moonglove Extract, ready to deal with the forthcoming Firebrand, but when Paul decided to evoke Spitebellows to clear the path for his team instead, Chris had to blow the Extract to take out the Inner-Flame Acolyte.

Chris found himself a Tar Pitcher, but was a little shy on the Goblins to pitch, and getting even shyer on life. Kindled Fury managed to make things a little fair by allowing the Tar Pitcher to take out Paul's lone remaining creature. Paul soon managed to remove the annoying Goblin, which left the pair in parity. A Caterwauling Boggart from Chris broke the temporary truce. Paul finally found what he was looking for and decided to drop the Vengeful Firebrand into play and swing in. The Earthbrawn he had drawn let his Firebrand run through the Goblin, and when Chris's deck didn't cough up an answer, he was ready to give the second game to Paul.

"Your start was just a little too fast," Chris sighed.

"Yep, the Acolyte will do that," Paul offered with a smile.

Cheon mulliganed a hand with very little business to start off the final game and yelped a little as he checked the top of his deck. Things were not going to get any better had he kept.

Paul got a turn two Wolf-Skull Shaman that immediately caught a Lash Out. Paul won the clash for the second time in a row by virtue of his Vengeful Firebrand. Sadly, Chris wasn't able to win the next clash either, and his Adder-Staff Boggart came down an unimpressive 2/1. He did manage to add a Lowland Oaf to his side of the board, though. Unfortunately for him, Paul's turn-four Cloudcrown Oak is a bit more impressive in the toughness department than Chris's Hill Giant.

Chris was unfazed, though, as he casually played a Caterwauling Boggart and sent his two little beaters into the red zone. Paul though for a few seconds and then sighed exasperatedly and decided not to risk Chris having Kindled Fury. "I hate having to play around that card," Paul sighed.

Paul took his damage like a man, added a Smokebraider to his team, and then passed the turn back to Chris with enough mana up to Earthbrawn if he needed to. Chris untapped and played a Facevaulter before sending in his team, signifying that he had something, most likely Pack's Disdain. Sure enough, after the Oak jumped in front of the Oaf, Chris had the Pack's Disdain to shrink the tree to nothing more than a shrub. A little Earthbrawn goes a long way, though, and the Oak got its head back up into the clouds, and its foot back into the Oaf's face.

Ceaseless Searblades gave Paul a second blocker to get around the Caterwauling Boggart's ability, and one with a pretty sizeable backside, as well. Chris had Paul down to nine, but was starting to run low on the gasometer (that's the technical term). He attacked in with his Facevaulter, and when Paul double blocked, Chris sacrificed his Adder-Staff Boggart to deal three damage to Paul's Cloudcrown Oak. After combat, Chris tried to have Paul's Smokebraider and Cloudcrown Oak finish each other off via a Rival's Duel. Paul had a Fistful of Might, though, and the tree lived to fight another day.

At this point, Paul had two fairly sizable men on the table, and Chris was left with merely a Caterwauling Boggart. A Glarewielder from Paul let him send through for a massive amount of damage, knocking Chris down to 12. Over the next couple of turns, all Chris could do was throw a freshly played Fire Juggler and his Boggart in the way. A Moonglove Extract wasn't enough to kill Paul's 4-toughness men, and Trembley was forced to concede.