Round 5: Bob Maher vs. Andrew Cuneo 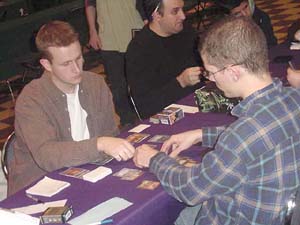 Both players are 4-0 at this point, looking for the win that will put them in great position to make day 2. Bob Maher has been playing seemingly since the dawn of time and has an impressive list of accomplishments. In addition to recently wining Grand Prix Copenhagen in this format, he has also won PT Chicago 99, placed 2nd in Worlds 2000, and was player of the year in the 1999-2000 season. He also has several other PT day 3s and GP Top 8s and wins. Andrew Cuneo has been playing for just as long. Famous for his inclusion in Car Acrobatic Team and their 2 day 3 appearances, Andrew has also had great success constructing decks, including the archetypical mono-blue deck Cuneo Blue.

Andrew won the flip and chose to draw with his 3 color deck (r/w/u). Bob's u/r deck seemed to dislike the aggressive role, leading off with a turn 2 Information Dealer. The wizard had an opportunity to attack for a few damage before Andrew summoned a Morphed creature to halt the beats. Bob followed up with a Morphed creature of his own and an Imagecrafter. After being reduced to 17 by the Morph, Andrew attacked back with his Morph, which was revealed to be a Skirk Commando after Bob announced no blockers. Andrew gladly took out Bob's morph.

Bob summoned a 3/3 Mistform Shrieker in an attempt to get some evasion pressure on, but Andrew countered with a 3/3 flier of his own: Aven Soulgazer. The fliers traded and Bob summoned a seemingly innocent little Airdrop Condor. His potentially game breaking Lavamancer's Skill on the Imagecrafter was foiled by Mage's Guile. Andrew's Skirk Commando took this opportunity to attack, and Bob looked to trade with Information Dealer. Andrew revealed his trick after damage was on the stack by revealing his morphed Daru Healer and preventing the one point of damage. Bob, though, had a more interesting (and unlikely) trick: he turned Information Dealer into a goblin with Imagecrafter and used Airdrop Condor to sacrifice it to deal 1 damage to finish of the Skirk Commando.

At this point, the game entered a stalemate. Bob was reduced to attacking with his Airdrop Condor and Andrew prevented one damage each turn with the Daru Healer. This went on for 3 turns, with neither player doing anything of consequence, and left the life scores 16-8 in Bob's favor. Eventually, Andrew broke the standstill with Doubtless One and Grasslands Courier. The 3/3 Doubtless One was matched by Bob's Goblin Machinist and the Grasslands Courier was met by a Sage Aven. The bird set up Bob's deck and allowed him to use Goblin Machinist to mill 2 land from the top of his library and accelerate him to Arcanis the Omnipotent. Drawing 4 cards a turn has its advantages, and eventually, Bob was able to activate his Machinist several times and the little Airdrop Condor hoisted the 10/5 monstrosity and dropped it on Andrew's head for the win. 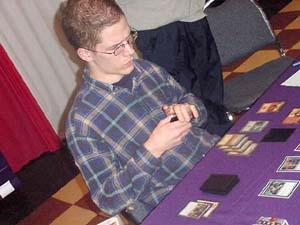 After the marathon game 1, Andrew again chose to draw. Again in the aggressive seat, all Bob could muster was a turn 3 Crafty Pathmage. This was met by Andrew's Morphed creature. Bob cycled Choking Tethers to tap the Morph and attack that Craftiest of Pathmages. Andrew came back with his Morph and summoned up a bomb: Callous Oppressor, but the only Cephalid in Onslaught immediately met his end thanks to a Chain of Plasma. Bob settled into a long game featuring him attacking with his Morphed creature with the aid of Crafty Pathmage. A Sage Aven joined Bob's team, only to be matched by Andrew's Aven Soulgazer. With the life totals 16-15 in Bob's favor, Andrew was able to press the attack because of the strength of his hand and board. Bob summoned his trusty Airdrop Condor, and kept attacking while Andrew summoned 2 Grasslands Crusaders. At 7 life and facing death next turn at the hands of Airdrop Condor, Crafty Pathmage, and a newly summoned Goblin Machinist, Andrew pulled what may be the best card in Onslaught, in terms of pure power: Insurrection. There was more than enough power on the board for Andrew to take the game.

With 17 minutes left in the round, both players are looking to play quickly to get the win. A draw is worth pretty much the same this as a loss as far as making day 2 is concerned, so both are playing quickly. Bob chose to draw this game, hoping to make Andrew's 3 color deck pay. Neither player mulliganed, though, and Andrew led with a turn 3 Morphed creature. This was promptly smoked by a Chain of Plasma, which Andrew sent back to Bob's head. 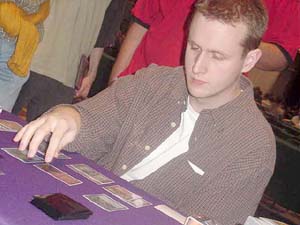 Bob untapped and cast a turn 3 Skirk Commando, which Andrew countered with a Mistform Dreamer. Bob had Choking Tethers, though, and cycled it to tap the flier and kill it by attacking with Skirk Commander. The Skirk eventually trades with a Morphed creature and Bob follows with Charging Slateback. The 4/3 creature comes through once and Andrew summons his Callous Oppressor. Bob, for some reason, names Cephalid.

Andrew broke this up before Bob could get it rolling by gaining control of Bob's suddenly less than trusty condor and sacrificing his own Skirk Commando to destroy Bob's Callous Oppressor. Bob came back with an Erratic Explosion targeting Andrew's Daru Healer. The game reached a stalemate again and Bob got very nervous. The life totals were 12-11 in Bob's favor and the board position was such that he couldn't lose unless Andrew cast Insurrection. Andrew did have 2 cards in hand and 2 Mountains in play, so Bob had reason to worry. In any case, Bob managed to use the trusty Airdrop Condor and Imagecrafter again to throw enough creatures directly at Andrew's head, culminating in Skittish Valesk and Shock for the final points on the final extra turn.

Final Result: Bob and his Airdrop Condor of Justice - 2, Andrew - 1