Round 5: Bob Maher vs. Kai Budde 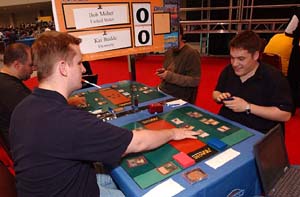 Kai Budde won the Player of the Year race in 1999, 2001, and then again in 2002. The only person to break his run was Bob Maher, who claimed the title in 2000 on the strength of his PT Chicago win and a 2nd place finish at Worlds. This year Budde is once again in first place and Maher is once again hanging around the top of the standings; he's currently in 5th place. In Pro Tour Yokohama, however, neither has gotten off to a good start. They were each 2-2 when they ran into each other. Since it takes a 4-2-1 record to advance to day 2, whoever lost this match would be eliminated from the event. They contemplated drawing, but Maher declined the offer because he wasn't sure he'd be able to win each of his next two matches and might want to draw in round 7.

These guys seem to play the game at a higher level than most of the rest of us. More evidence of this came up on turn 2 when Budde played a White Knight. Maher immediately exclaimed "That got to you 11th?!" Budde just nodded and smiled. When Budde flipped over an Aphetto Exterminator and killed Maher's Elven Riders, Maher commented that he'd gotten that Exterminator out of the same pack as the White Knight. Not many players have that level of recall or that ability to piece a booster draft back together again afterwards. 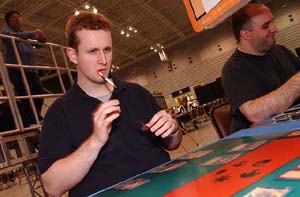 All that recall didn't really help Maher survive Budde's attacks, but Barkhide Mauler and Wellwisher did. Maher seemed to be taking control when he played Brontotherium and then sent it in, provoking Budde's lone evasion creature – a Wingbeat Warrior. Budde blocked the big beast with all five of his creatures and then used Akroma's Blessing to save his team while taking out Maher's big threat. Budde then untapped, flipped over a Skinthinner to dispatch Barkhide Mauler, and suddenly he was back in charge. Maher's Wellwisher was up to 3 life per turn, but that wasn't nearly enough to hold off White Knight, Glory Seeker, Aphetto Exterminator, Wingbeat Warrior, andSkinthinner; all of whom charged into the red zone to fight for Budde's cause.

Despite all that, Maher wasn't done yet. Birchlore Ranger traded with Skinthinner and Broodhatch Nantuko traded with the Exterminator, giving him three Insects to do his bidding. Then Gempalm Strider allowed Maher's Wellwisher and Stonewood Invoker to take out White Knight plus Glory Seeker. Budde was suddenly down to just that Wingbeat Warrior and Maher was on offense. Timberwatch Elf off the top was met with Budde saying "I figured you must have gotten one of those since you passed that Exterminator." Budde dealt 31 damage during the game, but Maher gained 18 from his Wellwisher over the course of the game and that gave him enough time to deal 20 and claim game 1. Between games Budde commented that he could have killed it, but he really needed to get rid of that Elven Rider. Maher agreed that Budde hadn't done anything wrong. 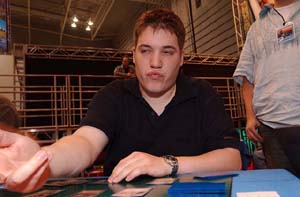 Budde shook his head and "booed" audibly when Maher dropped turn 2 Wellwisher in game 2. He would have been better off saving that sentiment for turn 3 when Maher added Timberwatch Elf to his side of the board. The good news for Budde was that Maher hadn't drawn any swamps, but Timberwatch on defense was enough to limit Budde's attack to just a single Screeching Buzzard. When Maher played turn 5 Elven Riders gave him a third elf and an evasion creature and Budde's Pro Tour looked like it was down to its last few turns. Elven Riders #2 came down on turn 6 and confirmed those suspicions. Turn 7 Stonewood Invoker just added insult to injury.