For the final round of Standard for today, we have Eugene Harvey of the USA against Amiel Tenenbaum of France. Amiel has had quite the season this year, with Finals appearances at both GP–Amsterdam and GP–Krakow this year. Eugene, a former U.S. National Champion whose best days on the Pro Tour were a few years ago now, sits at three wins going into the fifth round, similar to Tenenbaum. 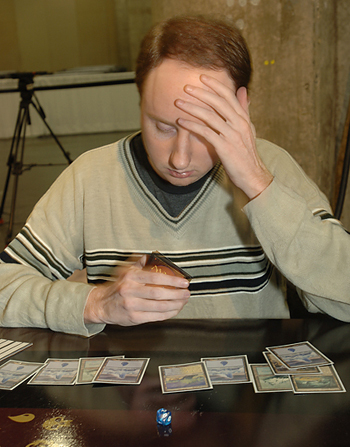 Eugene Harvey plays a frosty blue control match.Amiel won the roll, and started out with a Mountain, while Eugene had a suspended Ancestral Visions. From there, each player looked to sculpt the perfect hand. It looked likely that Amiel was some version of the Dragonstorm deck, but with Eugene bouncing a Molten Slagheap and drawing extra cards with Ancestral Visions, the American was better positioned to sculpt a hand.

Eugene soon got a Scrying Sheets into play, and used it wherever possible, while Tenenbaum charged up two copies of Molten Slagheap. A second Cryptic Command targeted one of Amiel's Slagheaps and he tried to respond with a Bogardan Hellkite, only for it to be stopped by Rune Snag.

Harvey had done a great job of slowing Amiel's clock, and had time to start making Urza's Factory tokens. He soon had two of them on the beatdown, and Amiel at 14 life, but had to remain wary of Tenenbaum's win condition, which could explode out of nowhere for a 20-point swing in a single turn.

Amiel could clearly see what amount of a clock he was on, and wasn't in a hurry to kill Eugene before he had to. Eugene, meanwhile, had another Cryptic Command to bounce the most fully charged of Amiel's collection of charge-lands.

Facing lethal damage the following turn, Amiel chose to act. He used Tarfire on an Urza's Factory token, followed by Shock on another. This was followed by Dragonstorm with two storm copies. Harvey was ready though. He had a Rune Snag for the original, plus Venser for a copy and Pact of Negation for a second copy. There would be no dragons today. Instead, Harvey got to bash in with is team, who were joined that turn by Teferi, Mage of Zhalfir. On just 4 life, Amiel drew, thought a little, then scooped it up .

For the second game, Amiel elected to draw, possibly to maximize the chances of his being able to play a Lotus Bloom on the first turn. Eugene had a mulligan from his opening seven, and suddenly Amiel would have a big advantage on cards in hand right from the get-go.

Ancestral Visions from Harvey threatened to change this, but with a Spinerock Knoll, Amiel looked to get what he needed hidden away ready for use. Harvey played a Peek, and Tenenbaum replied with a cheeky "It's not there!" as he revealed a hand with just lands, a Lotus Bloom and a Rite of Flame. It didn't look likely that the Knoll, which was soon joined by a second, would be activated any time soon.

However, there were bigger problems for Eugene. In spite of having drawn a great many extra cards, he hadn't got past the two-mana mark. With just a pair of lands to work with, he was ill-prepared to do much to stop Amiel. 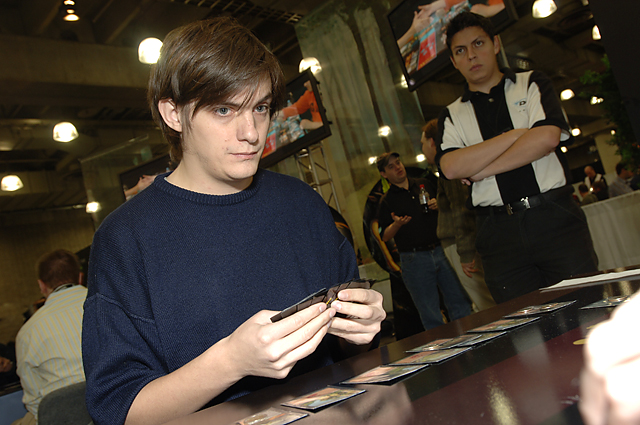 It took a couple of turns of draw-go to get there, but eventually Amiel had the magic combination, with two copies of Shock, followed by Incinerate letting a Spinerock Knoll flip up Pyromancer's Swath. A Grapeshot sealed the deal.

Tenenbaum got sent in to bat first, and looked to hit it out of the park, with Spinerock Knoll and a Lotus Bloom. Harvey was content to just play islands and say go. Amiel suspended a second Lotus Bloom, and saw his first hit play successfully. Step 1—"get a bunch of mana"—was looking to be a success. Just to be sure, Amiel suspended his third Lotus Bloom the following turn, while Harvey was still having to rely on his regular one land per turn for mana.

When Amiel tried to put a fourth counter on his charge-land, Eugene struck with Cryptic Command. He was intent on keeping Tenenbaum off the sorts of mana that lands such as Molten Slagheap can create. With Rune Snag in his deck this made perfect sense; it was just a question of if such a plan would work when fighting against so many Lotus Blooms.

Eugene used Venser, Shaper Savant to put off one Lotus yet further as it tried to come in, but this tapped him down low enough that Amiel had an opening. He cast Pyromancer's Swath, followed by a Rite of Flame. Incinerate, and finally Grapeshot followed.