Round 5: Brian Hegstad vs. Brad Swan 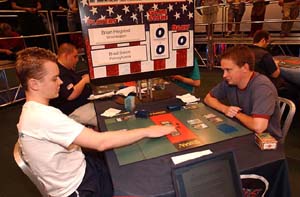 Coming into the match, Barcelona top 8 finisher Brad Swan of Delaware and defending US Nationals runner up Brian Hegstad both had an eye on the possibility of entering the draft portion of the tournament with just one loss. Brad won the coin flip, the combatants wished one another luck and they were underway.

Swan started things badly with a mulligan, and as he started shuffling, Hegstad noticed the bottom cards Brad flashed him, remarking 'so it's a blue deck'. Brad drew six and elected to keep, only to be forced to wait on his first land drop as Brian took a mulligan of his own 'I had no lands in the first one' said Swan while he waited ' I had one' Brian replied.

Brad started things off in style, playing Yavimaya Coast and Birds of Paradise. Hegstad's first turn though, may have been even better, with the top decked Careful Study allowing him to discard Roar of the Wurm and Deep Analysis. Brad played Merfolk Looter on his turn, risking Fire's ability to essentially end the game, but Brian, not splashing red in his blue-green deck, could only cast deep Analysis from the graveyard and pass the turn.

Still looking for his second land, Brad Looted unsuccessfully and ended his turn, Icing an Island during Brian's upkeep. Brian managed to get a Mongrel into play and pass the turn, after which Brad drew, said 'go', and then added 'it's the only land in my deck.' He was obviously displeased with his situation.

Brian's turn saw a fourth land enter play, and when Brad Looted at the end of turn, Brian asked for a pause in play to consider his options, finally telling Swan to untap, then casting Arrogant Wurm in the Easterner's upkeep. Swan let it resolve, drew, declared 'how lucky!' and played the fresh Island as the game began anew. 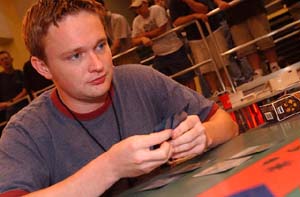 Brian's turn saw the Mongrel and Wurm attack, taking Brad to eleven. Swan then tried to cast Arrogant Wurm at the end of the turn, but found that not only was it to be countered by Circular Logic, but also that Hegstad had another Wurm ready to come to the forefront. Swan then cast Wild Mongrel and Birds of Paradise, but it was too late, and a turn later, with yet another Wurm facing him down, Swan scooped.

Between the game, with Observe Mark Rosewater pointing out that Hegstad's father had never won a Grand Prix (Tom Swan, Brad's father, won Grand Prix New Orleans last year), to when talk to turned to the elder Swan, Brad remarked 'He would have drawn another land'.

Once again, Brad started the game with a mulligan, forcing Hegstad to remark on his track record with US Nationals and mulligans, harkening back to his quarterfinal match a year ago. Unfortunately for the Washington resident, the talk came back to haunt him, with a very mediocre hand resulting in his own six card start.

Once again, Brad started with a first turn Bird of Paradise, and Brian retaliated in kind with his second first turn Careful Study, discarding another Study and a Basking Rootwalla. Brad played a second land and passed the turn, but when Brian went proactive with Wild Mongrel, Swan showed his true colors with Force Spike. He then untapped and cast Merfolk Looter, passing the turn.

Brian played Stupefying Touch, leaving the Looter to attack next turn as Arrogant Wurm got hard-cast into play. This left Hegstad believing he had to quicken his deck's pace a bit, leaving him to cast two Merfolk Looters, finally releasing his breath when Swan said 'go', making it obvious there was no Fire in that hand. With Hegstad's Rootwalla taking the score to 14-17 Swan, he passed the turn with two looters looking daunting, founding said fears when a madnessed Arrogant Wurm traded with Swan's.

Brian's next draw forces a smile from his face. After thinking for a moment, the smile broadened, with Brian saying 'that was a very good card to draw' before casting Unnatural Selection, as good a response he could find to Swan's newly cast Merfolk Looter. Brian's Looter became legendary, then the new Swan Looter did the same, dying. Brad knocked on his deck, then let out a yelp of joy, playing his own Selection, leaving him with three mana. 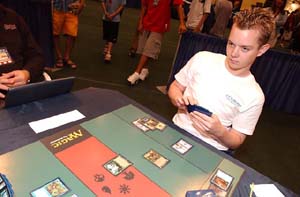 At this point, both player started to realize just how complex a situation they were facing. With Selections facing off, there would be stacks upon stacks of creature name changes and more possible end scenarios than any one person could count, and both players sat stunned for the next seven minutes or so trying to figure out the best tactic to take. Finally, with Swan passing the turn, Hegstad drew, Looted, played a land and sprung into action with his superior mana reserves ensuring that he'd be able to 'out-legend' Brad. The two engaged in a length stack of fast effects, with brad's disappearing mana pool leaving his Merfolk Legendary an instant-speed-effect too late.

From there, barring topdecks, it was all elementary. Brad could only muster an elf on his next turn, which could hardly be enough against Hegstad's active Looter. Brian piled up the counters in his hand, leading up to the successful resolution of Spellbane Centaur, which nullified Swan's Unnatural Selection once and for all. Brad tried to use it, at which point Brian pointed out the Centaur's effect, then countered Brian's counter when Fire targeted merfolk Looter and a Rootwalla, but he was too far behind. With no cards in Swan's hand and only a freshly cast Mongrel to go with the Bird and Elf, it was only a matter of time. Eventually, it was two Rootwallas and the elapsed clock, that did the Philadelphian in.