Round 5: The Brothers’ War, Part Deux

“He’s playing five-color exalted,” Olivier Ruel explained, pointing at his brother’s deck as they sat down in the Arena for their fifth-round feature match.

“Four-color,” his brother Antoine corrected, before adding, “We already showed each other our decks.”

The two brothers from France need little introduction. Antoine Ruel is a Pro Tour champion with a win in Los Angeles in 2005. His brother Olivier was inducted into the Pro Tour Hall of Fame, and is a constant force in the Player of the Year race.

“Mom is going to be so proud!” Olivier joked as they prepared to kick their match off. 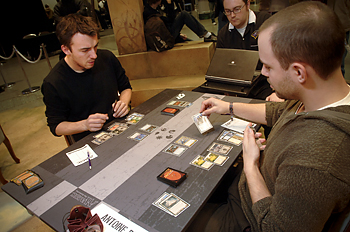 Brother Antoine and Olivier Ruel battle to decide the fate of Dominaria—errrr, the first draft round.Both players made their first action on the second turn, Antoine with Aven Squire and his brother Olivier with Worldly Counsel, peeking at two cards thanks to his Swamp and Island. The Hall of Famer then played an Esper Battlemage, threatening the livelihood of Antoine’s 1/1 flier. Antoine attacked his brother to 18, then played an Esper Battlemage of his own, though his exalted creature was killed on Olivier’s turn.

Viscera Dragger from Olivier stalled the board as Antoine was unwilling to attack a Deftblade Duelist into the 3/3 with Olivier’s active Battlemage on the board. Cancel from Antoine dealt with his brother’s Matca Rioters as it hit play, and the Ruel followed up with a fatty: Tar Fiend sacrificing two creatures. That forced Olivier to discard his hand and left Antoine with a monstrous 8/8.

Not to be outdone, Olivier promptly ripped Vein Drinker to net himself a fatty. He passed the turn, and Antoine used Oblivion Ring to deal with Olivier’s Esper Battlemage. Staring down the 4/4 Drinker and Viscera Dragger, he wasn’t able to attack, simply passing the turn back to his brother. Olivier gave a nod of approval at his next draw, and when he revealed it to be Bull Cerodon, Antoine was visibly frustrated. He was about to get out-drawn by his brother, and it looked like it would cost him the game.

A second Bull Cerodon for Olivier made things even worse for his opponent, and it looked to be all but over for Antoine. A few turns later, with no miracle waiting, the elder Ruel was left shaking his head in frustration as he moved to his sideboard.

While shuffling for the second game, Olivier explained why his brother was so frustrated. “He had seen my deck, and knew that Vein Drinker was the only card that he could lose to [after playing Tar Fiend]. He held Cancel, but the only turn he tapped out, leaving me with no cards in hand, was the turn I drew the Vein Drinker.”

The two started the second game off in near identical fashion as the first, leading on Aven Squire for Antoine and Worldly Counsel for Olivier. Esper Battlemage was again the first creature for Olivier, and he again used it to eat his brother’s Squire. Trying not to fall too far behind, Antoine played an Aven Trailblazer, which hit the board as a 2/2.

The intrepid flier wasn’t able to do much blazing of any type, quickly running afoul of a Pestilent Kathari. The two brothers then spent a few turns building their manabases up without playing any relevant threats. Trying to get something going, Olivier cast a second copy of Worldly Counsel, looking at four cards, and started attacking with his Battlemage. The score stood tied at 18-18.

Having reached the mana he needed, Olivier tapped low to play his Vein Drinker, but Antoine was ready, using Traumatic Visions to counter the 4/4. He followed up with Akrasan Squire, immediately sacrificed to Tar Fiend. Olivier discarded a card, then came right back playing Voices from the Void to make his brother discard his hand, then played a Nyxathid that was a full 7/7. After seeing two more cards over the course of the ensuing turns, Antoine conceded, disgusted with his draw.