Round 5: Carlos Barrado vs. Raul Mestre 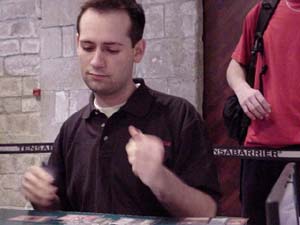 Both players seemed to know each other as they spoke as old friends.
Carlos Barrado won Grand Prix Madrid some time ago with a Necro-Donate deck, while Raul Mestre made Top 8 at Grand Prix Valencia. Both are Spanish top players meeting at the feature match table.

After some chatting they got on their way.

Both players kept their hands and Carlos dropped a Grim Lavamancer, which attacked next turn. A Milkin joins Barrado's forces. Raul Didn't seem to have anything to cast even having three mana and had to look without any chance at a Chainflinger He then cast an Aven Smokeweaver, which held all of the opposing army at bay. Raul needed some black mana to play some spells but instead he got a Krosan Archer out. His opponent in the meantime kept swinging at him with the Chainflinger.

Mestre was much more satisfied with what he drew and how the board situation looked like so he swinged once with his Aven.
Finally Carlos seemed to be alive and played an Amugaba, which got Persuaded to the other side. Things seem to be really getting grim for Barrado. Still, he killed his Amugaba with a combination of two spells and his Chainflinger. The four for one trade didn't seem to help his situation and kept him taking blows from the Smokeweaver leaving him with six life.

Carlos wasted away the opposing Aven and used his Lavamancer on the Scrivener. Mestre didn't seem to slow down when he finally got his black mana to use a Patriarch's Desire to kill the pesky Lavamancer.

Raul dropped a Narcissism and attacked. With two creatures on the board on his side and a Milkin on the other, Barrado at only four life conceded.

This time Mestre opted for the mulligan going down to six cards.

He started by dropping a Forest and a Diligent Farmhand, that stroke next turn. Carlos on the other hand played an Aquamoeba to stop the little farmer only to see Raul sacrificing it to get the swamp he needed. After a Chainer's edict Raul played an Aven Windreader to start the hostilities. Without any better answer Carlos replayed his Aquamoeba after having played Morgue Theft. A Nantuko Disciple joined Mestre's forces but left not much later with a Crippling Fatigue. 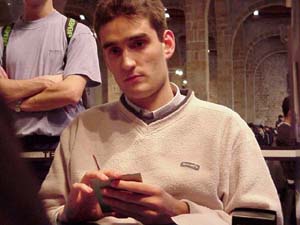 When Mestre used his creature's ability his opponent wasted it away. In retaliation Mestre flashbacked a Chainer's Edict to clean up the board.
An Anarchist on Carlos's side seemed to be unanswered since Raul kept drawing land.

A freshly cast Lavamancer got hit by Patriarch's Desire leaving the Anarchist to continue beating Mestre.

After some time with Raul holding almost only lands he persuaded a small creature in signs of desperation. An Aura Graft from Barrado's side turned the situation around and his opponent conceded.

Mestre started and dropped a Wild Mongrel on his second turn. After that he cast a Narcissism to worsen the board situation for Barrado. Carlos cast an Aquamoeba and a Hydromorphic Guardian. He attacked with both his creatures and discarded a Amugaba to switch Aquamoeba's power. Then he played Zombify to put the big snake into play.

What had seemed to be a certain win with a very good start for Raul had turned into a certain loss with such big fatties on the other side. Even after pounding his deck, Mestre seemed to find no answer and went down to eight life. Although he had Persuasion in his hand to snatch the Amugaba, the Hydromorphic Guardian's ability can counter it so he dropped an Aven Windreader to chump. Next turn the Amugaba got through and Carlos held a Diabolic Tutor to search for a Mountain to get the two remaining life down to zero with the Firebolt he was holding.