Round 5: Carlos Romao vs. Justin Gary 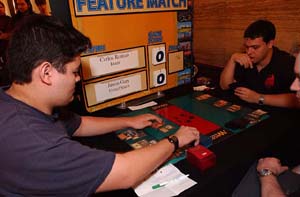 Both Carlos Romao and Justin Gary have proven themselves in constructed formats over the past year, with Romao winning Worlds and Gary winning PT Houston. Of course, both players won with dedicated control decks, which don't really exist here in this environment. This Pro Tour is like the Mesozoic Era of Magic, with huge thundering beasts stomping across the land. Which of these life-long blue mages has the better skill with giant monsters? With both players at 2-2, the loser is out, so tension was high.

In Game 1, Justin's white-red cycling deck gave him neither Lightning Rift nor Astral Slide by turn three; meanwhile, Romao's red-green Beast deck put out a Ravenous Baloth and a Tephraderm. Gary quickly found a Rift, and used it to kill the Baloth (and impeccable rules knowledge allowed him to do so without spending the fourth mana on a Rift payment on an illegal target).

Romao put out a second Tephraderm, which forced Gary to play Akroma's Vengeance. "A fair trade," he said, looking to go two-for-two—Vengeance and Rift for two Tephaderms. But Romao had a different trade in mind, using a Vitality Charm to save one of his Tephraderms. Akroma is no God in the Wrath department. 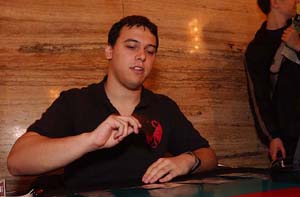 Romao added an Elvish Warrior to his side. Gary played back-to-back Renewed Faiths, which kept him alive long enough to find another Vengeance. But Romao had a third Tephraderm ready, and that one did Gary in.

Between games, Gary commented that YMG had seven versions of red-green during playtesting, including Romao's version, which he considered "awful." "So if I lose to it I'll feel really bad."

Carlos had the early advantage in Game 2, Naturalizing Gary's Astral Slide and then putting out a Lightning Rift and a Baloth. Gary took a couple hits but cycled two Renewed Faiths to keep his life total stable, and then dropped Jareth, Leonin Titan. The big Legend put a stranglehold on Romao's ground game; even a pair of Tephraderms didn't help.

Gary basically sat back and let Romao overcommit. Gary played a Rorix Bladewing to get a quick hit in for six. The Dragon died to Contested Cliffs + Rift, and then Gary Vengeanced the board clean. Even though Romao had a Silvos, Rogue Elemental in waiting, it was Gary that had the REALLY powerful Legend—Akroma, Angel of Wrath. Hard to stop 6 power of haste that can play defense against Silvos as well. Romao scooped. 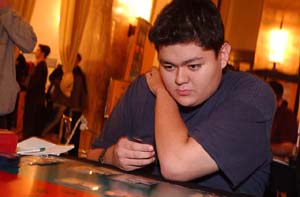 Carlos was stuck on two land for a few turns at the beginning of the third game, and looked unhappy about it. He eventually pulled out of it, but Justin started dropping huge beaters:

Carlos made a game of it, actually, by killing the Exalted Angel with Tephaderm/Cliffs and resolving a Biorhythm that took Justin to 2, but Akroma was unstoppable.