Round 5: Chris Kwan vs. James White 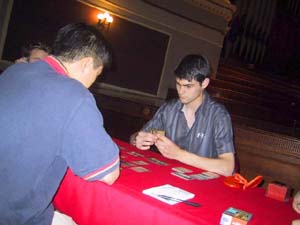 When the feature match was announced a massive cheer rang out from the hall of gamers. New Zealand national champion James White had a chance to extract revenge over last years GP in Sydney where Kwan had defeated his Ophidian deck with an Oath of Druids deck. White was also fresh from GP Capetown where he had gone 7-0 in the first day of the tournament only to end up having a shocking day 2.

White elected to draw first and followed up Kwans second turn Mystic Penitent with a Wild Mongrel. Kwan had an answer in hand though and cast Kirtar's Desire on the Mongrel, to which White replied with a Twigwalker. To help achieve a tempo advantage Kwan chose to dematerialize Whites plains rather than the freshly summoned Twigwalker and took 2 points of damage the next turn. White also pulled a nice play out of his bag of tricks using the returned plains to help fuel a 3 point Rites of Spring, discarding plains, plains and Abandoned Outpost.

When White dropped a Mystic Zealot a turn later in reply to Kwan's Dwarven Strike Force, he was only a few discards to the Mongrel away from achieving threshold. Hoping that White had no removal in hand Kwan dropped Aboshan, Cephalid Emperor into play and it managed to survive much to his relief. White cast a Seton's Desire on his Mystic, discarded two cards to the Mongrel and sacrificed the Twigwalker to give the Mystic +2/+2 and achieve threshold. He was shocked when it was tapped down by Aboshan in his attack phase.

Kwan then began to lock out the board casting Hallowed Healer and attacking with his creatures after tapping down all of Whites creatures during the endstep. White desperately stayed alive casting a patrol hound and Flame Bursting a Dwarven Lunatic to try and stop the bleeding that Aboshan was causing. 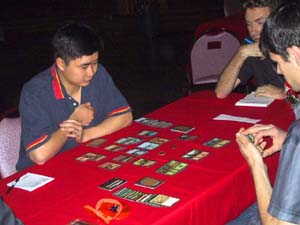 With only one turn left to live White cast the only card in his deck that could keep him alive, Kirtar's Wrath. Kwan sighed in disbelief as all his creatures went to the graveyard and he stared down two 1/1 tokens with only one card in hand. White then cast a Rabid Elephant and it looked as though he just might manage to pull this game back from the death. Kwan repelled the Rabid Elephant and cast Concentrate to dig into his deck looking for a way to deal those last few points of damage that would finish off the recovering White. Kwan followed up the concentrate a turn later with a Dwarven Recruiter which searched out a Dwarven Grunt, which could mountain walk the last few points to the end of game one, and an Angelic Wall.

Not to be outdone, White cast Anarchist, returning the Wrath to his hand while Kwan again stared on in disbelief no longer sure what he needed to do to finish off the feisty kiwi. White Wrathed the board away again the next turn only to have Kwan repel his Scrivener and cast it again, gaining his Repel back from the graveyard. When the Crashing Centaur hit the table Kwan was forced to use the Repel to remove one of the tokens as the threshold prevented him from flipping onto the top of his opponents library. White summoned a Diligent Farmhand that he could use to chump block the Scrivener while attacking with his Centaur and token to bring Kwan down to 8 life. When Kwan cast a second repel on the farmhand he thought he was in trouble as the scrivener dropped him down to 2 life however Kwan had no burn to finish the job. White calmly untapped attacked for 6 damage and finished Kwan off with Shower of Coals, staging a miraculous comeback. 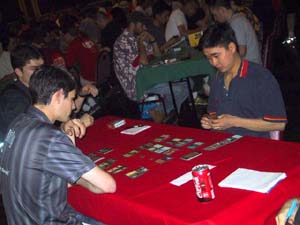 With only 15 minutes left in the round after an epic game one both players decided to sideboard in black to help their ability to deal with their opponents decks.

Kwan needed to go on the offensive quickly in game two if he had any chance of turning this match into a draw and his first play was a turn 3 Barbarian Lunatic, which White met with a turn 3 Hallowed Healer. Keeping the pace going Kwan dropped a Dirty Wererat, but again White had the perfect answer locking down the board with Angellic Wall. No matter what Kwan did White did enough to keep the game tied up rendering Kwan unable to get through the defences, matching a Dwarven Strike Force with a Zombie Assassin and a Dwarven Recruiter with an Aven Flock.

Kwan tried desperately to remove Whites creatures with Morbid Hungers for the Healer and the Assassin but White had a Hunger of his own for the Strike Force and a Shower of Coals on the Lunatic, a Gravedigger and Fledgling Imp. With only one turn left in extra time to deal 21 points of damage Kwan had no choice but to go down to the New Zealander 1-0.