Round 5: Chris Pikula vs. Dave Humpherys 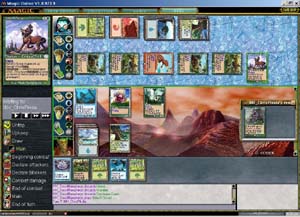 (click to open full-size in a new window)While Humpherys brought the beats with Nimble Mongoose and Wild Mongrel, Pikula set up his yard with Careful Study and a pair of Merfolk Looters. Two Roars were in his yard, and he had three shots to get the green source he needed.

Hump rained on his parade with a Flametongue Kavu, but Pikula was not to be denied. He Looted Wonder into his graveyard and dropped Yavimaya coast, serving up a 6/6 flyer. Humpherys cast Breakthrough for four, serving up a horde of new creatures as well as a second Breakthrough. Pikula got ready to kill him.

Humpherys Noted, hoping for something good. Pikula let it by. It served up another Note, and this one Pikula's Circular Logic was enough to stop it. He swung all out, and pinned all his hopes on Breakthrough for one, with just two mana up. Wonder went to his graveyard, and Seton's Scout came into play.

Pikula was no longer able to attack for the win, and Humpherys had enough to swing back. 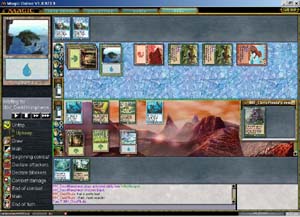 (click to open full-size in a new window)Again, Pikula had double-Looter action. Humpherys had double-Mongrel, though, and answered a Phantom Centaur with Flametongue Kavu to tak out a Looter. Another was stopped by Circular Logic, but Humpherys had Wonder in his hand, and sailed over for eight, leaving Pikula at 5.

Even having gone through a third of his deck, Pikula hadn't found a Wonder of his own. Humpherys still took his time making sure he had the correct line of play before he busted Pikula's face for the win.