eccentric Canadian deckbuilder Jim Roy has garnered a bit of a following online. Rather than follow traditional "four-of" consistency, Jim opts instead for what he calls "threat diversity," which is a fancy way of saying he has tons of different cards in his decks. Friday's concoction is a black-blue midrange deck that appears to be built around Dark Confidant. Among its 23 unique nonland cards are Azami, Lady of Scrolls; Sensei's Divining Top; Repeal; Izzet Guildmage; Muddle the Mixture; Threads of Disloyalty; and multiple Dragons. 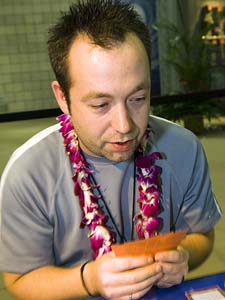 His opponent is Arnost Zidek, currently the Czech Republic's best player. Zidek is running a relatively straightforward Gruul deck with plenty of burn. Zidek arrived at his list playtesting with his countrymen and France's Ruel brothers.

Roy had what looked to be all the answers early on. He played Threads on Zidek's Gruul Guildmage, which was subsequently Shocked. A Kird Ape came down for Zidek and picked up Umezawa's Jitte before swinging in, but Roy was on the case and transmuted Muddle the Mixture for his own Jitte. Roy's continually untapped Quicksand was also making life difficult for Zidek.

Zidek, for his part, wasn't drawing any more creatures and had to lean on his lone Kird Ape for the bulk of his offense. It looked grim when Roy finally found land number five and summoned forth Meloku, but Zidek had two more Shocks at the ready. Kird Ape No. 2 arrived on the scene shortly thereafter and Roy quickly found himself at 10 life.

With little else to do, Roy cast back-to-back Dark Confidants. Combined with Quicksand, "Bob" could take out a Kird Ape, so attacking was not an automatic for Zidek. In fact, he decided to just pass and see if the Confidants would do the dirty work for him.

"Keiga, the Tide Star," said the first Bob during Roy's upkeep. "Hinder," said the second. And like that, the Canadian was at 1 life. A Char off the top for Zidek ended the game. And that, kids, is why putting six-mana cards in the Dark Confidant deck is dubious at best.

If there's one thing that Jim Roy decks do well, it is confuse opponents who are trying to sideboard. After much head-scratching, Zidek opted to side in Genju of the Spires and Naturalize, and then slipped in two Giant Solifuges at the last second, later noting that, "You [Roy] have to tap out so much that I can get these [Solifuges] to resolve." 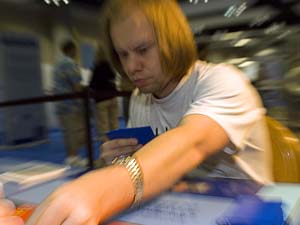 A consistent Gruul attack powered Zidek to the win

Zidek began Game 2 with a Llanowar Elf, and Roy one-upped him with a turn-two Izzet Guildmage played off of the painful duo of Waterveil Cavern (really) and Underground River. The Guildmage was removed from play, as were Zidek's Elf and subsequent Kird Ape, but Rumbling Slum resolved and Zidek also had managed to sneak a Genju onto his only Mountain.

Roy was holding a handful of expensive spells and had to tap out in the face of the Slum and Genju just to Gifts Ungiven for four lands. With the door open, Zidek dropped a Solifuge, putting the game way out of reach for Roy.

Although Roy's deck contains many little tricks and synergies, it looked to require just a bit too much luck to come together quick enough to handle the consistency of Zidek's Gruul army.