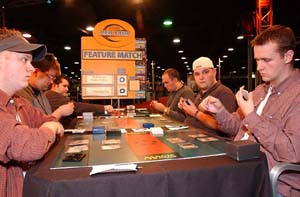 Bob Maher, Jr has won a Pro Tour and a Grand Prix with multiple Top 8 finishes in a variety of premiere events. But that it is his non-performance over the past six months that has drawn people's attention this weekend. This is Bob's first Pro Tour event since serving a six-month ban from sanctioned play. Many people wondered if he would be up to the challenge.

Bob had an uncharacteristically low number of Pro Points coming into this event and soaked up the points of Neil Reeves and Gary Wise—both of whom had very good years. Apparently they spent the last ten days at the fabled Maher Compound working on the format, building sealed decks and preparing to draft on Day 2.

It seems to have paid off, as they are guaranteed to make Day 2 with a 4-0 record coming into the round.

Their opponents are also locked in to make Day 2. They are not as high profile but they did finish within shouting distance of Day 3 at last year's team Pro Tour. Paul Jordan is known to many internet readers from his columns on Neutralground.net and togit.com but Matt Urban and Josh Ravitz remain well guarded secrets of the East Coast.

How could I focus my attention on any match but the Bob Maher/Paul Jordan C-seat match?

As I settled in to cover the match, Paul joked that the last time he was in a feature match it was at Grand Prix: NJ with me on his team. We went on to lose the match and our shot at top 4. With a lifetime 0 – X record in feature matches, Paul was nervous about his team's chances.

Bob elects top go first and keeps his initial seven cards. Paul did not and had to ship them back to find six cards he was satisfied with.

Bob's first play was a Barbarian Outcast on turn two with a Mountain and a Swamp in play. Paul had only Islands at this point and could not do anything with his fistful of black cards.

Bob did not draw a fourth land and attacked Paul down to 14 with his animals. Paul was able to swing back for one with the Fiend and then played an Aven Fogbringer, returning Bob's only swamp to his hand—killing the Barbarian Outcast in the process.

Bob swung his Dusk Imp into Fogbringer and the players traded fliers. Paul cracked for one again with the Mesmeric Fiend and dropped his bomb—Thought Devourer. He had to discard one card and pitched a Morgue Theft.

Bob played a second black source and Crippling Fatigued the Mesmeric Fiend getting his Chainflinger back. Paul attacked for four and made an Aquamoeba.

Bob had a whale of a turn as he cast Ghastly demised the Aquamoeba, giving him enough cards in the bin to Ghastly Demise the Devourer. Paul was not out of gas though and he made an Aven Windreader.

Bob finally got his Chainflinger into play and passed the turn. Paul attacked Bob to 11 in the air and flashed back Morgue Theft to pick up Thought Devourer.

Bob went to 8 on his next turn as he flashed back Crippling Fatigue and used his Chainflinger to finish off the Aven. He added a Rotting Giant to his side of the board. Paul was happy to make a Devourer and discard a Looter. 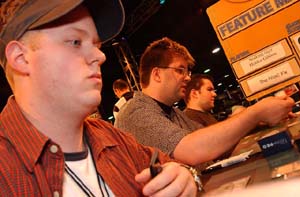 Bob had two turns to live and attacked with everybody, bringing Paul to 11. He played a Gravedigger and picked up a Dusk Imp to serve as a fog next turn. Paul took him down to 4 with the Devourer and played a Wonder. Bob used his Chainflinger to take Paul down to 10.

Bob attacked with everybody and Wonder got in the way of Chainflinger and Paul fell to five life. Bob played his Dusk Imp/Fog and a Barbarian Lunatic. Paul had the afflict and they shuffled for Game 2.

Josh Ravitz was up a game on Gary Wise and things were looking good for Josh in Game 2. Before the match began, Matt Urban told me he liked his deck except in a U/W mirror. He was of course in a mirror match with Neil Reeves—still Game 1. Neil was trying to find a way to get his Glory into his graveyard and Matt was looking for a possible way to win.

Bob chose to play first again and both players stuck with the first seven cards they looked at. Bop played four Swamps and Diabolic Tutor for Mountain was his first play. Paul did not have any play on his first four turns.

Bob played a Barbarian Lunatic that was Afflicted EOT. Paul made an Aquamoeba and passed the turn.

Bob added a Chainflinger to his side of the board. Paul Peeked on his turn to dig for a card and saw Toxic Stench, Treacherous Vampire, Cabal Patriarch and a Swamp. Paul now had enough cards to Ghastly Demise the 'Flinger and attacked with his Aquadog.

Bob made a Whispering Shade and attacked Paul to 16. Paul was able to crack with the Aquadog and nibbled Bob's life total to 18. Cabal Torturer joined Paul's team.

The Whispering Shade proved too much for Paul to handle and he quickly succumbed to the Swampwalker.

Josh Ravitz had won both games against Gary Wise in less time than it took Matt to lose the first game to Neil Reeves.

Both players kept their opening seven and there was actually some play on the first few turns for a change. Paul peeked at the end of Bob's turn and saw Chainflinger, Morgue Theft, Sonic Seizure, Dirty Wererat and three Swamps. 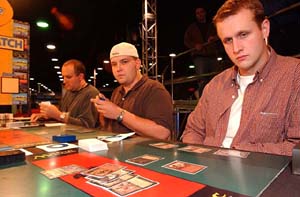 Paul's Mesmeric Fiend took the Chainflinger and it had a Sonic Seizure EOT—Bob discarded Swamp.

Paul wanted a second Swamp to play a Torturer but only found Island. Bob mocked him with a one-toughness Dusk Imp. Fourth turn only brought Paul more Islands and he had nothing while Bob made a Dirty Wererat.

Paul Afflicted the Dusk Imp but still found no second Swamp—or even a fifth land. Bob took Paul down to 16 and played a Chainflinger.

Despite getting a Thought Devourer into play with a Strength of Lunacy, Paul never drew a second Swamp until it was too late. Ghastly Demise on the Devourer left Stalking Tiger, Hidden Gibbon's fate in the hands of Matt Urban.

Matt and Neil could not finish the second game in time and Courtney's Boys took the match.