Round 5: Craig Wescoe vs. Alan Comer 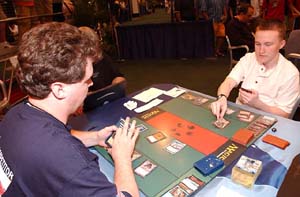 Tennessee's Craig Wescoe qualified for Nationals the day before – during the "US Open" or "meatgrinders." He took his "Psychatog + Red" deck to a 6-0 record yesterday, but is only 2-2 with it so far in the main event.

Wescoe started out with a turn-2 Nightscape Familiar, and Comer "accelerated" as well with a turn-2 Sky Diamond. The problem was that he had to "gate" a land with a Dromar's Cavern to cast it.

Wescoe Fact or Fictioned in his main phase for some land and a second FoF, calling it "Free land plus a do-over."

Comer took advantage of Wescoe tapping out to Edict away the Familiar. Comer then Fact or Fictioned himself, netting Dromar's Charm and a backup FoF of his own. Both players FoF'ed again, setting up for some long fights later on. 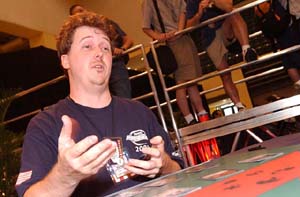 One such fight was picked when Wescoe played a Psychatog. Comer wanted to off it with Chainer's Edict, but Wescoe had a Repulse waiting. Comer said, "Um, no," and Counterspelled it, Wescoe cast Circular Logic, but Comer had the trump – Dromar's Charm.

Both players then reloaded, Comer with Concentrates, and Wescoe by flashing back two copies of Deep Analysis that were in his graveyard from earlier Fact or Fiction splits.

Wescoe got a Psychatog to resolve, and the game state was such that one hit would be lethal to Comer. So Alan had to Concentrate for an answer. He found an Edict and Edicted. Wescoe Iced two of Comer's lands in respose and then Circular Logicked, but Comer had Dromar's Charm again.

Now Comer was tapped out and Wescoe desperately wanted to Upheaval. He sacrificed a Cephalid Coliseum looking for one and didn't get one. So he mainphase Fact or Fictioned, choosing Upheaval over four other cards. But he couldn't cast it that turn.

With only three cards in hand, Wescoe looked to be vulnerable to a Comer Gerrard's Verdict. Wescoe countered the Verdict, then Comer went for it, casting a kickered Desolation Angel. The big flier resolved, and Wecsoe, down to 8 from painlands and Deep Analysis flashbacks, fell in two turns. 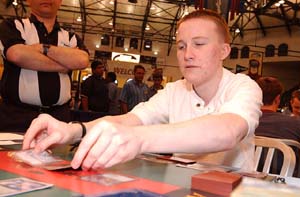 Game 2 was not exactly one for the ages. Comer was stuck on two Coastal Towers and had to discard a few times while Wescoe was developing nicely with two Nightscape Familiars and some very cheap Fact or Fictions. Comer eventually drew two more land, but Wescoe was so ridiculously ahead. A third Familiar and a Psychatog joined the party, and Wescoe's seven-card hand scared Comer into scooping.

Comer had to mulligan twice to start the final game, and he never got momentum. His turn-three Verdict was countered, his turn-4 Concentrate hit with a Gainsay, and then Wescoe cast Deep Analysis.

After Comer ran out of spells to play, he hit a land pocket and Wescoe just played a Psychatog and kept casting card-drawing spells until Comer conceded.

Comer has had to mulligan six times in his three feature matches. Granted, his deck's mana base is not exactly the most stable thing ever, but six is an awful lot. Comer is now 2-3 and Wescoe improves to 3-2.