Round 5: Darwin Kastle vs. Dave Humphreys

Wow - what could possibly be more appropriate for a Grand Prix Boston feature match than Darwin Kastle versus Dave Humpherys? These two have worked together for years and each has a long resume of Pro Tour success, including their win at the first team Pro Tour as members of team Your Move Games. Surprisingly, they've only met once before at a PT level event, with Humpherys taking a match from Kastle at the most recent Worlds. 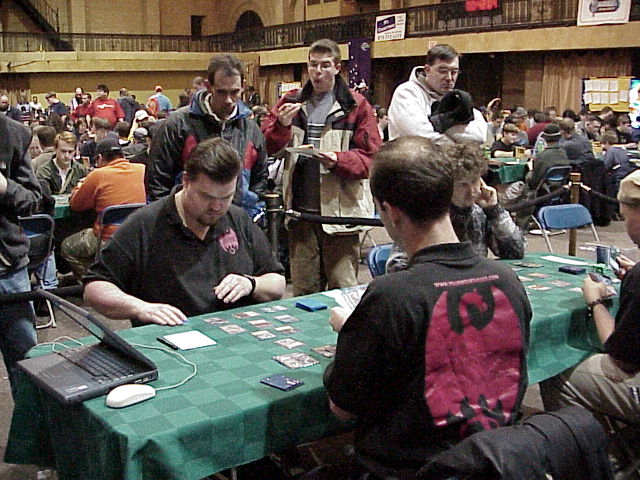 Both players ran red/black/blue sealed decks (though Humpherys also has just enough green for Darigaaz) and when practicing against each other during their byes, Kastle won decisively (though he wondered aloud to me if the Hump let him win a few of those since Humpherys knows how important his friend's morale is to his friend's success).

Game 1 started slowly as both players analyzed their many options and tried to gain card advantage. Kastle Prohibited a Repulse aimed at his early Familiar and Darwin also used Rushing River to save his Reaper after it got into combat with a Mire Kavu. Then he Zapped away a Tower Drake. Humpherys nailed a Shivan Zombie with Hunting Drake, but Kastle got his revenge with Shivan Emissary. After the players each Recovered their Phyrexian Reapers, Kastle played Fact or Fiction giving him both board advantage and card advantage.

This match was a stark contrast to the last two I watched. Previously, I had covered match-ups between red/black/blue decks and aggressive decks (either black/red or with green). Those were classic battles between beatdown and control with one player trying to deal 20 before the other can stabilize. The red/black/blue mirror match works very differently. It's all about trying to get off your cantrips and trying to make it hard for the other guy to use his. Life is a resource than can be traded for board advantage and patience is definitely a virtue. 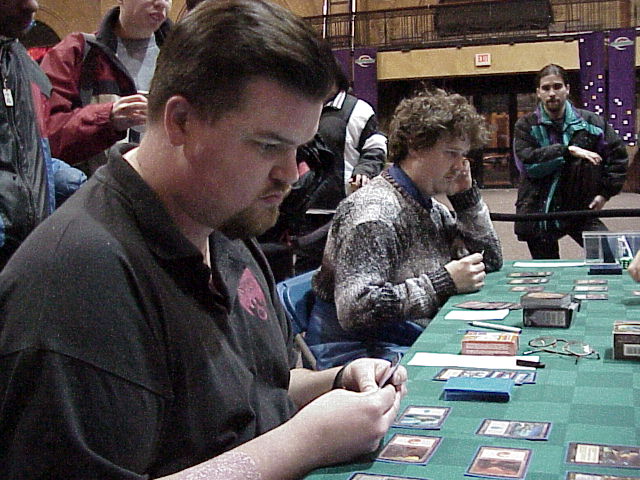 Twenty minutes into game 1, Darwin dropped a bomb: Yawgmoth's Agenda. Humpherys drew a card, thought for a few seconds, and then decided his time would be better spent trying to win games 2 and 3. He was on 14 with a hand full of cards, but he knew from testing that simply could not deal with the awesome card advantage provided by that Agenda so he scooped and started shuffling.

Game two started more aggressively. Kastle played a turn 5 Faerie Squadron with kicker followed by Power Armor. Humpherys answered with Vicious Kavu followed by a bomb of his own: Darigaaz, the Igniter. Darwin's Faeries plus Power Armor meant Darigaaz was back on D and then during the Hump's end step Kastle bounced both the Dragon and the Kavu so he could swing for 7 and force Humpherys to spend his next two turns just getting back his previous board neutrality. Humpherys took some time out to "Nekrataal" away the Faerie Squadron (with Shivan Emissary), but Kastle Recovered it. Kastle asked "time for Exclude Dave? Now would be a good time for it." before replaying his Faerie Squadron. Humpherys just shrugged and the 3/3 hit the table once again.

Humpherys attacked into Kastle and Kastle was clearly worried about Magma Burst. Kastle decided not to risk blocking with the Faerie Squadron and instead just put Nightscape Familiar in front of the Vicious Kavu. When he went to set up a regeneration shield on the Familiar he had just one Island left untapped. Humpherys responded with Magma Burst, sacrificing two lands to kill both the regenerator and the flier. Kastle immediately slammed down Confound! Thanks to his Familiar, it only cost him U, but that one blue mana created 5 cards worth of card advantage! Next Kastle Prohibited a Shivan Emissary (which Humpherys had put on top of his own library with his own Hunting Drake) and then played Fact or Fiction. Crypt Angel gave Humpherys a third chance to play his Shivan Emissary. 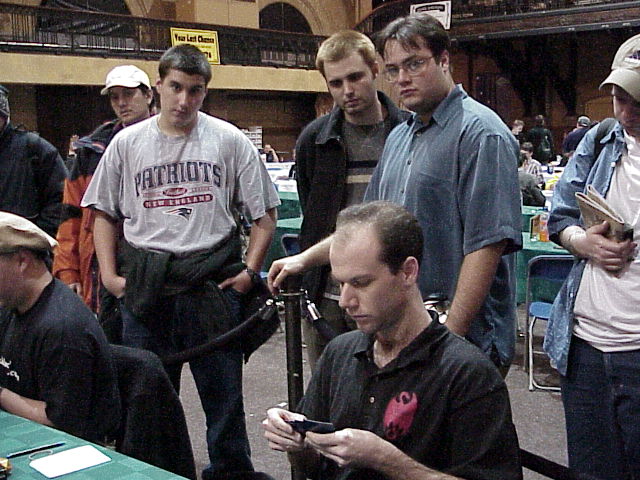 Kastle said aloud "Shivan Emissary is pretty bad news for me" but then played Yawgmoth's Agenda. Kastle used the Agenda to Prohibit the Emissary, but Humpherys also had Repulse, clearing a path for him to deal 9 flying damage and drop Kastle to 1. Only after he played a land during his second main phase did Humpherys notice that he forgot to activate Darigaaz's special ability, which would have given him the win since he had just Repulsed a guy and thus knew which color to name. Humpherys was distracted by the fact that time was about to run out, which it did during Kastle's next turn. Kastle kicked Rushing River to bounce the Crypt Angel and Darigaaz, clinging precariously to his one point of life while simultaneously knocking Humpherys down to 5. Since Kastle had Tribal Flames in his graveyard, Humpherys was forced to start chump blocking and couldn't ever get through for that last point. Instead Kastle finished off The Hump on the final extra turn.

There were actually two different ways for Humpherys to win game 2 and thus draw the match. In addition to remembering to activate Darigaaz, Humpherys could have forced Kastle to mana burn for 1 when Kastle paid 5 for a Faerie Squadron while Kastle had Nightscape Familiar in play. However, that isn't how Humpherys plays the game.