Round 5: Dave Price vs. Eric Taylor 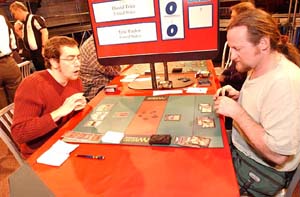 Before the match began, former Pro Tour L.A. Champion Dave Price confided that his unkempt beard was, in fact, a disguise. It's not surprising, considering his lackluster performance this weekend, already out of contention for Day 2. Sharing his woes is noted curmudgeon Eric Taylor. Both have drafted red-green decks.

Before the match, Taylor made sure that there would be press on-hand for his Hat Eating on Sunday. Price suggested that he get a hat made of cake, but Taylor refused, saying "I can't cheat." He believes in following the spirit and the letter of his promises.

Dave Price won the roll and mulliganed. His already gloomy face fell further. Taylor apologized sincerely. He started acting on his third turn with a Dwarven Recruiter that was pure Gray Ogre. Next turn he played the equally spectacular Mad Dog.

It was all good, though, as Taylor missed his fourth land drop and had no play. Price brought a second dog, shocking Taylor. "Another Mad Dog? Unstoppable!" He Flame Bursted the Recruiter at end of turn and made a Twigwalker. Blazing Salvo puts Taylor to nine. 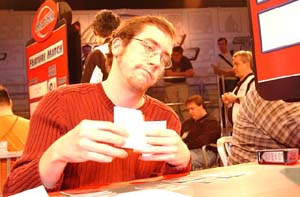 Price untapped and swung into the 'Walker, trading one of his Dogs for it. Taylor made a Pardic Firecat and stayed back. Acceptable Losses cleared the way for another attack. Taylor ripped Stalking Tiger and slammed it down. Price had to use Mad Dog and Barbarian Ring to take it down, leaving him with no hand whatsoever. Taylor was at three.

But he was also on the rebound. He found a forest and made Titan, followed by Frenetic Ogre. Thermal Blast ate the Farmhand, and a dejected Price didn't even search. That gave Taylor pause. He knew Price was no fool. He attacked with the Titan alone. Price confirmed his suspicions with an end-of-turn Elephant Ambush.

Price sent with the token, trading it for the Ogre and a randomly discarded Volley of Boulders. The Titan hit again. Now it was Price's turn to be at three. Taylor tightened up defenses with Ember Beast and Werebear. Price hoped for burn, but none came, and he scooped.

Price's draw co-operated in Game 2, with Diligent Farmhand, and two Mad Dogs coming to play before Taylor found a third land. It didn't much help that Taylor was without green mana. Then there was a third Dog. Taylor hid behind Pardic Firecat. 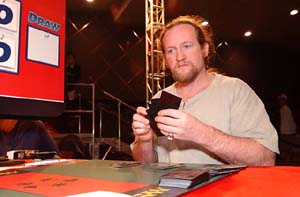 Taylor returned the mulligan favor in Game 3. He answered Price's Diligent Farmhand with a Minotaur Explorer, losing Blazing Salvo. Price made a Wild Mongrel. Taylor swung into it, and traded his Explorer for two lands from Price's hand. He laid a third land and passed it back.

Taylor tried to stabilize with Springing Tiger, but Price spent Flame Burst and Engulfing Flames to hit again. Taylor decided to switch strategies, his Pardic Firecat coming down swinging. Price was happy to trade blows. Taylor thought Patchwork Gnomes would do the trick, forgetting to read Engulfing Flames and ditching a card to save them. He frowned.

He made a Millikin and held back the Firecat. Thermal Blast took down the Cat, forcing Taylor to chump with Millikin. He cocked his eye at the stony-faced Price. "You don't take enough pleasure in winning.", he said. With that Price's composure fell, busting into a huge grin and laughing "Oh, I'm enjoying this a great deal!" Next turn he swung for the win.