Round 5: Dirk Baberowski vs. Antoine Menard 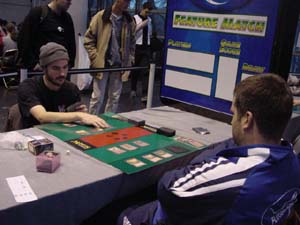 Dirk Baberowski is one of the top German players and currently riding high in the player of the year race on the back of a top 8 in Copenhagen and winning the Team Pro Tour with Budde and Blume. He confessed he hadn't tested much and brought a Piledriver Sligh deck to the table. Antoine Menard is a solid player only recently returned to France after battering the English PTQ circuit during his stay at Oxford University. Unfortunately for him, like a lot of the French players, he's running Suicide Black. When Baberowski started with Mountain, Pup, Menard's comment summed it up.

The game that followed was very odd. Baberowski had a hand with a lot of creatures, but little burn. He chose not to attack his pup into Menard's turn 1 Carnophage and summoned Mogg Flunkies. Next turn he attacked and the Pup traded with a Mesmeric Fiend. Then there followed a very strange protracted stand off while both aggressive decks stared at each other on opposite sides of the red zone. The wall of Carnophage plan for Menard couldn't really be considered a lasting solution for the Frenchman. The two Negators stuck in his hand weren't helping matters either.

The Frenchman did see all 4 Diabolic Edicts to keep Baberowski's monsters pinned to the other side of the board. But with the Carnophages slowly leeching away Menard's life Baberowski was in no hurry, especially as the Frenchman's only other creature was a Skittering Skirge and that too was pinned back on defense.

Menard thought a Duress to get rid of the Reckless Abandon Baberowski was holding might clear the way for the Negators to enter play. Unfortunately the German had another so the Negators continued to sit in the Frenchman's hand. The Abandon threw a Goblin at his head to drop Menard to two and take the Carnophages out of the game. 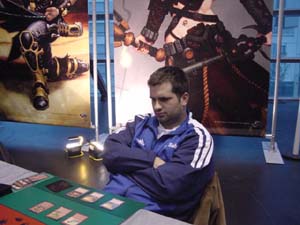 With only the Piledriver in play for Baberowski Menard had to go for the Negator. Unfortunately the German was holding Reckless Charge and drew a second Piledriver to bring the game to its expected end.

Game 2 was far quicker. Seal of Fire traded with Carnophage and Menard replied by Edicting away Baberowski's Flunkies.

The third turn saw the Sideboard cards. Engineered Plague on Goblins looked very strong for Menard only for Baberowski to trump it with Ensnaring Bridge. Once the German emptied his hand Menard would be unable to win. It didn't even come to that as Menard's land consisted of two Wastelands and a Swamp. Baberowski drew the pillage he'd sideboarded in and took that away. He started swinging with a Jackal Pup and weakened Flunkies. A Cursed Scroll left Menard with no conceivable outs and he conceded.