Round 5: Dirk Baberowski vs. Gary Wise 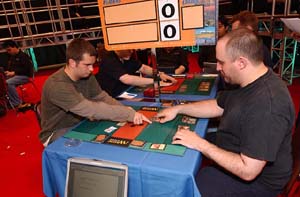 Dirk Baberowski barely escaped his draft with twenty-three playable cards. Unsurprisingly, the topic of discussion as he and Gary Wise sat down to their Feature Match was the draft itself. He and Wise had sat next to one another, and they shared vague stories about the difficulties they encountered. Through some shrewd deductions Wise got a sense of how bad things were for Baberowski

"How many colors are you playing?" – Gary Wise

They shuffled up and got down to business. Baberowski's cautious decision to keep his hand seemed unjustified when he came down with Deftblade Elite on the first turn. Wise answered with Withered Wretch. Baberowski looked like he almost felt bad about slapping down mountain and Crown of Fury. Next door, Kai Budde couldn't help but voice his appreciation in the form of a spit take. 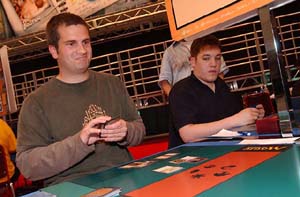 "I swear, the plains was off the top!" – Dirk Baberowski

That did little to ease Wise's pain. He played no creatures until turn five while Baberowski threw down Gustcloak Harrier and Keeneye Aven. Wise made a Severed Legion and a Shepherd of Rot, but Baberowski knew all about resolving first strike damage before turning on the Elite, so the game was never really in doubt. Anurid Murkdiver stopped the Elite, but Baberowski's fliers took care of the rest. 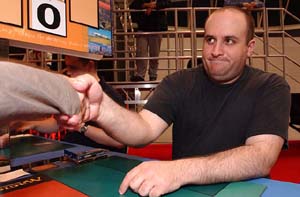 Wise got on the board early with Shepherd of Rot and a once-amplified Embalmed Brawler. Baberowski answered with a morph and then a Daru Stinger showing three soldiers. Wise got in the beats while he could, adding a Smokespew Invoker to the table, but his frustration was evident. Having only one swamp was not helping matters.

Baberowski added injury to insult with Lavamancer's Skill on his Morph, shooting down the Invoker and paving the way for his Stinger to attack. When Wise activated his Shepherd at end of turn, Baberowski flipped Echo Tracer to send the Brawler home. Wise, holding Infest, prayed for a swamp. He did not get it.

Now Baberowski was firmly in control. His Stinger was too much for Wise to handle. Crude Rampart locked up the ground and he just served for four while Wise failed to draw relevant cards.