both are established pros at this point, these two have never played each other before, not counting an intentional draw in Mexico City. Both players are 3-1, so the winner from this match will be in excellent position going into the final round of the day. 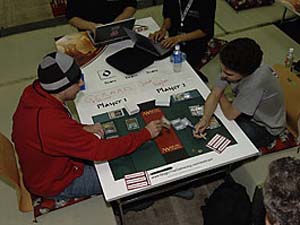 Fabiano and Nuijten in the Feature Match pit.

Reigning World Champion Julien Nuijten is playing a monoblue deck that splashes black for Bob Maher's card from the Magic Invitational, Dark Confidant, a card that many have predicted would have enormous impact on both constructed formats. So far the deck has served him well, and there is already buzz about this talented young player perhaps being the first to finally land a back-to-back World Championship title.

Standing in his way is Gerard Fabiano's black/green deck with a splash of white. The deck features Birds of Paradise and several elves for mana acceleration, Loxodon Hierarch and Seed Spark (main deck), Hypnotic Specter, and two copies each of Ink-Eyes and Okiba-Gang Shinobi.

If this bizarre deck sounds like something he might have made the morning of the tournament, that's because it is! Gerard's teammates are playing heavy blue control decks, and Gerard said he expected a lot of blue on Day One and didn't relish wading through a bunch of mirrors. So, this morning he set about putting a deck together that was disruptive enough to deal with blue control but tough enough to also handle the aggro decks. So far he's only lost one match, and he says the blame for that is his, not the deck's. 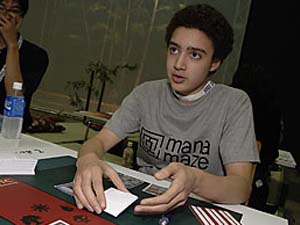 Was there another Worlds Top 8 in Julien's future?

Julien won the flip, decided to play, and both players kept their opening hands. From the start, this was a battle of card advantage. Julien looked strong with a turn-two Jushi Apprentice, but Gerard looked much better with the dreaded second-turn Hypnotic Specter.

On its first swing the Specter yanked a Remand. A Wood Elves joined the party, and the land it searched brought out an Elves of Deep Shadow as well. Julien decided to Hinder the Elf back to the top of Gerard's deck rather than draw off the Apprentice, which drew a surprised look from his opponent.

It all came clear next turn however, when land number four brought a Jitte for the Apprentice to swing over with, knocking out the Specter. Unfortunately for the champ, a Putrefy knocked out the Apprentice, and a Seed Spark broke the Jitte, adding even more 1/1s for Julien to deal with.

Julien stole an elf with Threads of Disloyalty, but Fabiano Putreified it as well and added yet another elf to his mass of tiny beaters. Another turn of green weenie beats and Julien threw in the towel. Time elapsed: 4 minutes 32 seconds.

As with Game 1, this one was a duel of card advantage engines right from the start. This time it was Dark Confidant versus turn-two specter (off an Elves of Deep Shadow). On his third turn Julien thought a very long time but just ended up playing a third land and saying go. Gerard shot him a look. 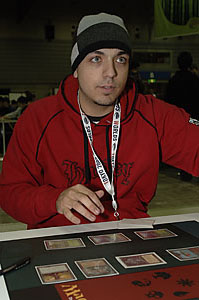 Gerard brought the pain down on Julien.

The Specter swung in, knocking out a Remand, but Last Gasp on Dark Confidant ran into a Mana Leak. But Gerard had another land, and used it to slip a Jitte into play.

Julien again revealed a land with the Confidant's ability, then dropped out a Jitte of his own to send both to the 'yard. The Specter swung in again, this time knocking out a land. Gerard thought a bit but then just passed the turn. For a third consecutive turn Julien revealed land from the Confidant, drawing a "how lucky!" from his opponent, but Julien was clearly feeling anything but, as his hand was nothing but land at that point.

Things got even worse when a Putrefy send Bob Maher to the graveyard, taking away the one thing that had been offsetting the Specter's card advantage. Julien tried a Jitte next turn, but it ran into a Seed Spark. The killing blow came next turn when one of those tokens became Ink-Eyes, Servant of Oni.

Bob Maher joined Fabiano's team, and that was enough for Julien. Fabiano joked that maybe he'd hit a 10-casting cost spell to lose the game, but Julien wasn't buying. Still shaking his head, he was clearly shaken from a complete thrashing that had taken less than 10 minutes to deliver.