Walking into the feature match area this round, I was a little surprised that the speakers weren’t blasting hits from Tupac and Biggie Smalls. This was an East Side vs. West Side battle worthy of an hour-long VH1 special. Szleifer, originally from Chi-town, has relocated out to Northern California for school. Parke, on the other hand, came here from the mean streets of New York. Both players were ready to rep their hood in this clash of old school versus new school. 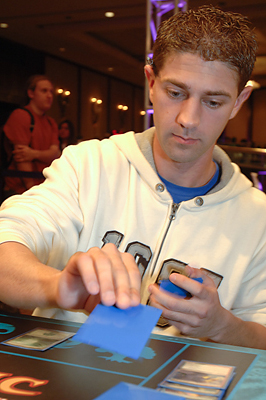 Jamie Parke: no mana, mo’ problems. “Wanna call it in the air?” Szleifer asked as he pulled out a quarter to see who would go first. When Parke agreed, Szleifer launched the quarter completely off the table. “Oh, Jesus,” he blurted when the coin landed in Parke’s lap. Parke launched the coin back onto the table with a simple “You call it.” When Szleifer chose wrong, Parke won the right to serve first.

Forest, Llanowar Elves, go. If Parke could say those words all weekend on turn one, he would end up a happy camper. That is, unless he was to follow it up with his next turn. Birds of Paradise, attack you for one, go. Notice I left out the land drop. So did Parke’s deck. Szleifer kept his mana base growing but didn’t add anything else to the board. A Treetop Village off the top ropes got Parke a second land. He had three other mana sources, but missing those land drops put him a bit behind. Before long, Szleifer’s deck would kick into gear, and unless he was under some pressure from Parke, he’d be able to run wild.

Parke tried to get a crew together, but Szleifer scared off Parke’s newly recruited Tarmogoyf with a Terror. Clearly, he wasn’t hard enough for the thug life. On the next turn, when Parke sent his Llanowar Elves in to brawl, Szleifer used a Pestermite to tap down Parke’s Birds in combat, denying him the mana in his main phase. The Faerie then took the Elf with it to the big liquor store in the sky. Szleifer also had a Nameless Inversion on Parke’s Birds, locking him down to a Forest and an impotent Treetop Village.

Next turn, Parke found a Forest to power his Treetop Village, but Szleifer just Terrored it. Clearly, Szleifer was winning this turf war. The next few turns were among the most exciting I’ve seen in a long time. Szleifer and Parke each drew their cards for their turns, and Szleifer played some lands, while Parke didn’t. It got so bad that at one point, Parke had to discard a Deus of Calamity because he had eight cards in his hand. Eventually, Oona, Queen of the Fae laid down a beat for Szleifer, and soon thereafter, Parke was the one who got served.

Losing Game 1 put him a bit against the ropes, and a mulligan to six on the play probably didn’t help his spirits. Parke started building with a Llanowar Elves on the second turn after a first-turn Treetop Village. Szleifer signed the hit factory Bitterblossom to his label, which was going to threaten to knock Parke off the charts unless he did something. That something was to get gangbuster on Szleifer with a Chameleon Colossus. The Colossus was huge against Szleifer’s Bitterblossom and its black Faerie Rogue tokens. Szleifer was going to need to draw some Pestermites or Cryptic Commands if he was going to stop the Colossus. Unfortunately, all his deck gave him was a second Bitterblossom.

The Colossus started his beats on the following turn, dropping Szleifer to 15. He was joined on the table by a Magus of the Moon. Szleifer made some Faerie Rogues with his Bitterblossoms, and then used his freshly transformed Mountains to play a Murderous Redcap to 187 the Magus. On his next turn, though, Parke decided to send his Colossus in and pump it, dropping Szleifer to 5. With two Bitterblossoms churning and a rampaging Colossus, Szleifer was on a clock so big Flavor Flav would die of shock. After drawing his card, Szleifer tapped out. 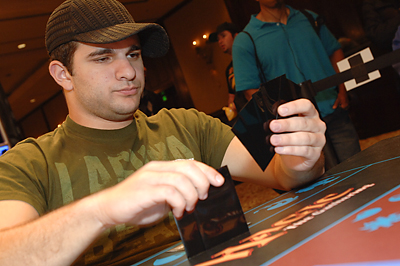 The judge stopped over to check the status of the match and to update the board with the game count behind me. Szleifer glanced to the fairly empty guardrails next to their part of the feature match area and drawled, “Gotta keep the adoring fans up to date. I know I’d be dying to watch this match if I was them.”

“Who wouldn’t be?” Parke added with a laugh.

This time it was Szleifer who had to throw his hand back, eventually settling on a five-carder. Unfortunately for him, Parke’s grip was as tight as Suge Knight’s. First-turn Llanowar Elves and second-turn Countryside Crusher provided a blazing start for the New Yorker. Szleifer didn’t have too much going on. A few lands and a Loxodon Warhammer were all he had to try and stop the gang across the board. Parke revealed a Deus of Calamity via his Countryside Crusher that was likely to hit play in a couple turns. He swung with his team and dropped Tarmogoyf, one of the biggest stars of this last year, onto his side as well. Szleifer knew he was done for when the next upkeep turned the Crusher into a 5/5 that he had no way to deal with, and was joined by a Deus of Calamity. Sure, a Damnation could get him out of this, but you kind of need, you know, black sources to play it, and his deck didn’t seem to want to give him any.

2 Oona, Queen of the Fae