"Oh man, I finally get a good chair," David Shiels sighed with relief as he sat down to the feature match table. "My friends and I were joking earlier that the only way we were going to get a comfortable chair was to get a feature match."

At least that gives you incentive to win...

Apparently, Gaudenis Vidugiris and Shiels had used that incentive well, jumping out to quick 3-1 records. Both American players have great resumes, with a title at Grand Prix Dallas/Ft. Worth for Shiels and three titles for Vidugiris, in addition to a second place finish at Pro Tour Dark Ascension. Vidugiris had the advantage of preparing for this tournament as a member of team SCG Black, with the likes of Hall of Famers Jon Finkel, Gabriel Nassif, and Jelger Wiegersma; brewer extraordinaire Sam Black; and Grand Prix San Jose winners Matt Sperling and Paul Rietzl. 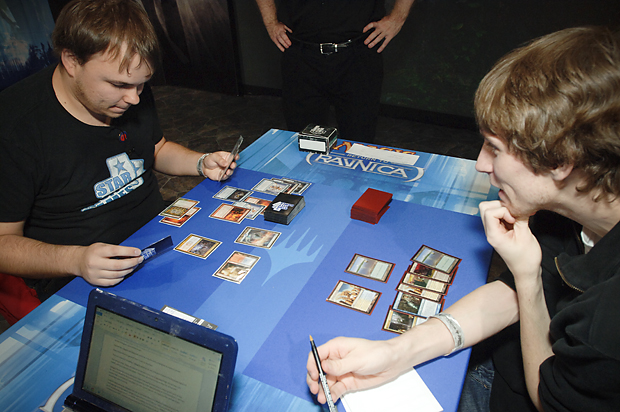 David Shiels was happy to land himself in a comfortable chair for the fifth round. Gaudenis Vidugiris was looking to kick him out of that chair as quickly as possible.

Shiels started the first game off down a card on the draw.

"Let's find out what you're holding," Vidugiris sighed as he cast a Gitaxian Probe for the Phyrexian mana cost.

"Not very exciting," Shiels admitted as he fanned a hand with Snapcaster Mage, Mystic Gate, two Islands, and two Celestial Colonnade. "I have been second guessing my keep this whole time." 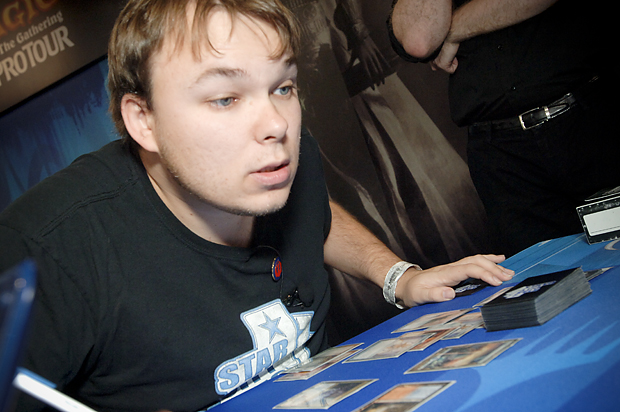 Vidugiris leans over to see what his Gitaxian Probe has revealed to him.

Vidugiris finished his turn by playing and Island and casting Serum Visions, keeping both cards on top. His next contribution to the board was a surprising Goblin Electromancer on the following turn, netting a puzzled look of acceptance from Shiels. Considering the Izzet pin on Vidugiris's shirt, perhaps Shiels should have seen it coming...

Using the Electromancer, Vidugiris was able to turn cards like Pyretic Ritual into true mana-generating engines. Vidugiris began a storm count in his turn that looked as follows:

At this point, Shiels stopped Vidugiris and asked him if he was dead yet.

"Not yet," Vidugiris admitted. "I don't have the Grapeshot yet." After finding one with his last Serum Visions, Vidugiris showed Shiels the Grapeshot and the rest of his hand, containing four more spells that Vidugiris could both pay and flashback. Shiels wisely conceded rather than waste any more time.

"I was pretty sure that with Jon Finkel on your team that at least some of you guys would end up on Storm," Shiels admitted as he shuffled.

"Yeah, that was a strong possibility," Vidugiris conceded.

"During the Magic Players Championship, I remember watching them do a deck tech with Finkel and Kibler. While Kibler was up front explaining the cards they chose and how their deck worked, while Finkel just said that he wanted to play Storm, but Kibler wouldn't let him," Shiels said in defense of his point.

"Yeah, that's pretty much how our testing went, too. Jon just sat in a room playing Storm and the rest of us tried to find something else that was viable," Vidugiris said with a touch of a laugh and a shake of the head.

Shiels managed to get something on the board this game, an improvement over his suboptimal previous game. Geist of Saint Traft came down and threatened to take the game in the next three turns if Vidugiris didn't kill him.

"If I got to play one more card this game, that would be sweet," Shiels sighed with a shake of his head.

Vidugiris began his attempt to go off:

About halfway through watching Vidgugiris go through the motions, Shiels lost interest.

"On Magic Online, this is where I would F6 and go off to the bathroom," Shiels wryly joked.

He knew he was in dire straits. By the time Vidugiris hit the second Pyromancer Ascension, Shiels shifted his attention to how many cards Vidugiris had left in his library.

"I'm not quite dead yet," Shiels figured aloud. "I'm probably less than 5% to win this game, but if the Grapeshot is one of the last two cards in your library, I'm still alive." Shiels checks to see if there is some hope that he can weather the storm.

As soon as Vidugiris cast the second Gitaxian Probe, however, Shiels realized that he'd miscalculated.

"That's plenty of cards to draw the whole deck. Nevermind," he glumly admitted as he offered his concession to Vidugiris.

After the game, Shiels and Vidugiris discussed his decisions to keep the hands that he did.

"I didn't think I could throw back this last hand since it had a Negate and a Snapcaster Mage. I don't know... maybe I shouldn't have cast that Geist of Saint Traft and just kept mana up for Negate, but I was worried about my ability to make my land drops and do both in one turn," Shiels revealed while Vidugiris nodded in approval. Shiels only had four lands, and two of them were Tectonic Edge.

"Sweet. One card played in two games," a dejected Shiels muttered as he packed up his cards after a disappointingly one-sided match.