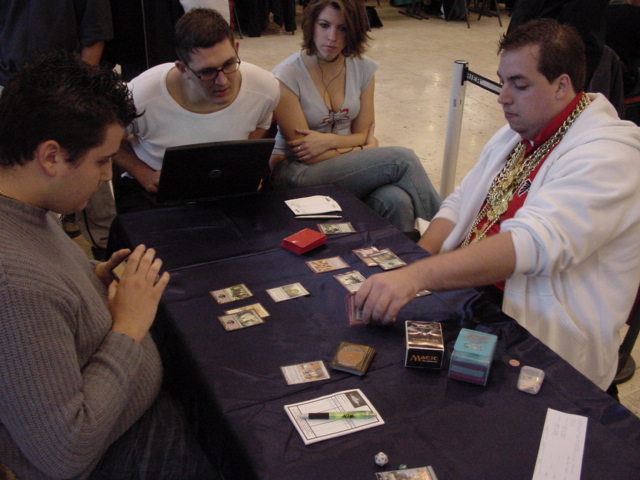 Mario made top 8 in GP London a few months back. He is trying again in Lyon. Jeroen is da Gangsta from Holland during GP Lyon and does not want to talk about early accomplishments; he is here to win Lyon and doesn't want anything else on his mind...

Mario and Jeroen played in London too, also in round 5. Mario won that match, eliminating Jeroen from the tournament.

Only thing Jeroen wants to say is addressed to Platy:

ario rolled a lucky number 13 on his D20 and made the choice to start.

Both players were good to go.

First plays of this interesting match were Pyrite Spellbomb and Copper Myr on Jeroen's side and Gold Myr on Mario's side. When Mario sent his Myr to get a bite of Jeroen, no blocks were announced. Jeroen took 1 and Mario added a Cathodion to the field, that got Deconstructed in Jeroens turn. Mario could not do much with the mana so had to burn for 3, but not before Jeroen made good use of his 3 mana to build a Soul Foundry. He imprinted a Neurok Familiar with the idea to build a massive amount of 1/1 fliers and net him an occasional card or 2.

"Kai. I just resolved a Soul Foundry imprinted with a Neurok Familiar. Is that any good?"

Kai Budde was playing Nicolas Herzog on the other feature match table and couldn't give Jeroen more than a headshake. 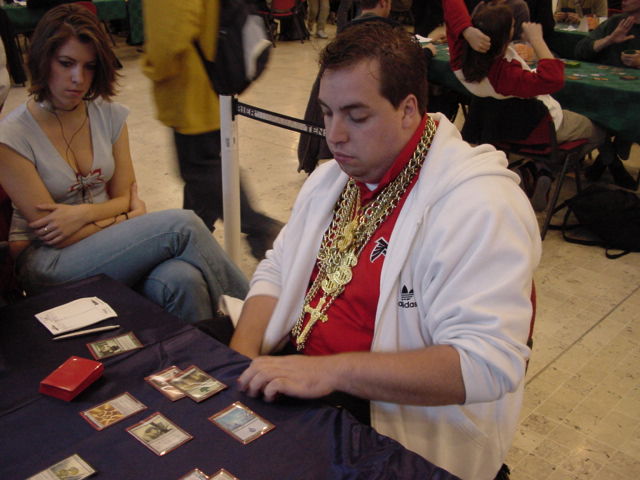 Mario, more a silent guy, at least in this match, was now at 16 thanks to the Cathodion burning him and tried a Pewter Golem. The Golem got burned by the Pyrite Spellbomb in Jeroen's turn and a Neurok Spy joined the fun. Mario passed the turn playing nothing and Jeroen made a Neurok Familiar token with the Soul Foundry at the end of Mario's turn. The top card of Jeroen's library showed him an Aether Spellbomb and he happily added it to his hand. Jeroen served with the Spy and made another token, just to see if he could do that trick again. It got him a Frogmite that he could play for free and Jeroen's mood got a little better again.

All Mario could do was to resolve a Nim Shambler, but Jeroen attacked past Mario's defenses with the little fliers and the Neurok Spy and built another token. It got him a random Golem, but Mario had conceded in disgust because of the savage cheatery of this Gangsta...

Jeroen: "Got a card off every Familiar token I made!"

FM Reporter: "That's because you're a big cheat!"

Jeroen started game 2 with a Tel-Jilad Chosen and Mario answered with a Gold Myr. Copper Myr and Auriok Transfixer joined the serving Chosen that knocked Mario's life total to 18. Cathodion was Mario's next creature.

Jeroen started the air battle with a small Slith Ascendant while serving for 2 again with the Chosen.

Mario had no real answer to the Chosen and only played a Goblin War Wagon before serving with Cathodion.

Jeroen thought it would be a good idea to Soul Foundry again and removed a Skyhunter Cub, still 1 white mana open to be able to activate the Transfixer.

Mario thougt for a long time and attacked with just the Cathodion; War Wagon got tapped by Jeroen.

In Jeroen's turn, the Slith became 3/3 after attacking and did 4 together with the Chosen, which could still do evil things, because of the fact that Mario only had artifacts in play. 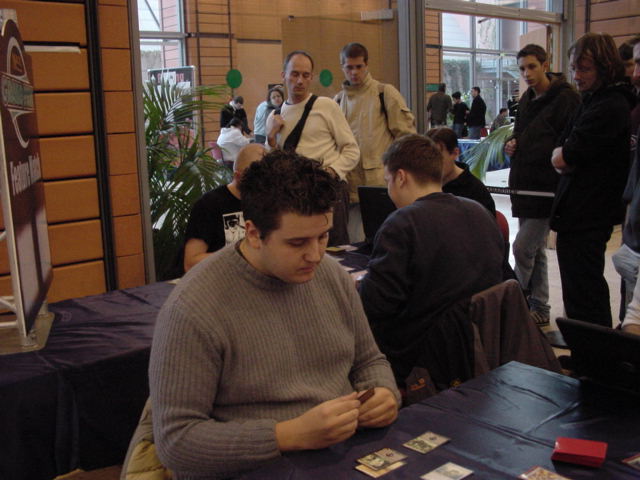 Mario only had 3 lands and that caused Jeroen to tap the mana Myr in Mario's upkeep. Mario could only make a Viridian Longbow in disgust. When the next card, a Soldier Replica, was made, but got Deconstructed in the first mainphase of Jeroen's turn, Mario had seen enough of Jeroen's deck and conceded.

When asked about their sideboard, Mario shows Creeping Mold, Deconstruct and the Viridian Longbow along with some extra forests. Jeroen stuck to his white sideboard plan he had already made at deck construction. The white cards came in for the blue; something he has this to say about:

"My white was very good, according to some testing during the 3 rounds of byes, so that was the game plan. It worked out pretty ok..."