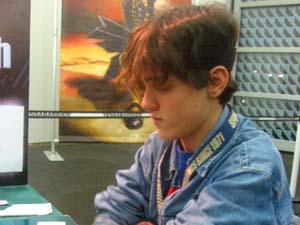 would have a hard time finding a better example of two drastically different styles of European Magic. Tuomo is the typical Nordic player, quiet and focused, hardly ever showing his emotions. Well, that's a lie. He once got a bit annoyed during a three-hour long Masters match against Ben Rubin.

Accross the table sits the Italian, Dario. He's certainly a good example of the typical Latin player. During the matches he smiles, complains, pounds his deck, swears... well, he doesn't make any effort to hide his emotions.

There's no doubt they have the right skills or they wouldn't be here again at 4-0, but they play the game in a very different way.

Tuomo played Pyrite Spellbomb and Myr to power out a turn-two Journey of Discovery. The Italian used his own Myr to play Skyhunter Patrol. Tuomo tapped his four different lands and played Tel-Jilad Archers.

The Skyhunter Patrol stayed back as Minieri added two more creatures to the table. Apparently we were in for a long game. Taj-Nar Swordsmith gave Minieri Bonesplitter. He tried to hand it over to Skyhunter Cub but Tuomo promptly sacked his Pyrite before using Terror to knock the Patrol off the table.

Wurmskin Forger came into play - pumping the Archers and Nieminen finally stepped into the Red Zone. Minieri returned the favor and played "the mother of all speedbumps" (a.k.a. One Dozen Eyes).

Minieri was unfazed and dropped the last two cards in his hand: Rustspore Ram and Spikeshot Goblin. He then buried his Bonesplitter and groaned. Still, he had little or no reason to complain, since he untapped and played Bosh, Iron Golem.

Nieminen stared at it for a few seconds before untapping. His Spikeshot Goblin took out Minieri's lone Red source (a Myr) and a top-decked Mirror Golem (imprinting the Cub) made sure Bosh - and his trampling ability - were somewhat under control. With a full table - twenty-eight permanents - Tuomo hardly blinked. He gave Vulshok Gauntlets to Mirror Golem and sent it in, dropping Dario to ten. Even with all his creatures Minieri couldn't block the Golem.

The little Italian drew his card and conceded after a brief deliberation. 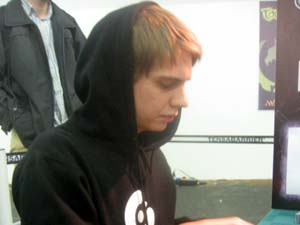 Dario came out with Leonin Den-Guard and Cathodion while Tuomo took us back to Invasion Block by playing three different basic lands. Finally he blinked, casting Thirst for Knowledge and discarding two mountains. The Italian frowned.

Nieminen's first real permanent was Sun Droplet but Minieri seemed unable to capitalize on that slow start. The Finnish played Spikeshot Goblin (a foil one) and sat back. At six mana Dario Minieri finally moved once again: One Dozen Eyes, again for the horde option.

Tel-Jilad Exile joined Tuomo's side as the Droplet kept gaining counters. Minieri dropped Icy Manipulator and kept the Exile out of blocking assignments. Tuomo fell all the way to four, then five in his upkeep.

With his back now firmly against the wall, Tuomo needed a good answer. His next draw didn't give him an easy out and he agonized over his next move for a while. Finally he tapped all his lands to play a creature. Dario showed him the Blinding Beam.

With twenty-one minutes on the clock Dario asked his friends on the sidelines about their rounds as Tuomo retouched his sideboard. Tuomo played Pyrite Spellbomb and the Italian answered with a semi-tapped Auriok Transfixer followed by a Myr. The Spellbomb got cycled and a third different land gave Nieminen another permanent in Goblin Replica.

He followed it with Spikeshot Goblin making Dario smile and shake his head. Taj-Nar Swordsmith again brought along Bonesplitter and Minieri's little army was starting to give Tuomo some very serious headaches. He played Tel-Jilad Exile to keep things under control.

The strategy seemed to work, pushing the Italian into deep thought. Finally he settled on a plan - a good one at that. He used his Transfixer and an entwined Blinding Beam to sneak through five more damage - leaving the Finnish at eleven - and keep the blockers tapped for another swing.

Nieminen sat back and surveyed the battlefield, before playing Looming Hoverguard, bouncing the Cathodion. The Italian equipped his Transfixer and sent it in before replaying the Cathodion. At seven Tuomo got to untap his creatures. His Hoverguard got the first chunk out of Minieri's life totals and he passed the turn over.

The Transfixer handed over the Bonesplitter before getting axed by Johnny Spikey. Down to two creatures Dario could only watch as Tuomo Nieminen dropped creature after creature and took full control of the table as his Hoverguard worked the Red Zone like clockwork.

Outgunned three-to-one and outclassed by the spikey goblin, Exile, and Hoverguard, Dario's army sat around watching the Blue Drone fly over their heads. The Cathodion took one for the team and Minieri used the extra mana to turn Stalking Stones into a creature.

Minieri drew one last card, smiled and extended his hand.