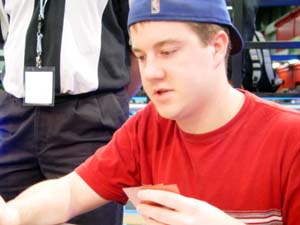 judge putting up the names on the feature match board asked me who is who, which got a pretty funny response out of Krempels:

"How embarrassing! Isn't it obvious who the obnoxious American is?"

The almost-friendly banter continued, as both players shuffled up.

Ostrovich had a first turn Auriok Transfixer, and Krempels played Slith Firewalker. A Scimitar made the Transfixer bigger, and Krempels took full control of the board, playing Spikeshot Goblin and Glissa Sunseeker. Vulshok Gauntlets were already out and went on the Transfixer, but they were destroyed in short order. Krempels made things even more ugly with a second Spikeshot, and Ostrovich tried to create a window of opportunity with Blinding Beam, keeping Krempels' team tapped down for a turn. All he could was play Yotian Soldier and Gauntlets, leaving him with one card in hand. Krempels played Ogre Leadfoot and Pyrite Spellbomb, which was more than enough to get Ostrovich to concede.

Ostrovich sideboarded plenty of cards for Game 2, changing his deck around significantly. 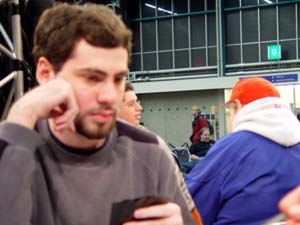 This time, Ostrovich opened with Myr Retriever, and Krempels played Silver Myr. Ostrovich summoned Soldier Replica, and as Krempels tapped his mana Ostrovich mockingly asked for a Spikeshot Goblin, but got Tel-Jilad Exile instead. It attacked into Soldier Replica, Shatter took down the Retriever before combat, and Battlegrowth let it take down the Replica in combat. Predator's Strike did likewise for Ostrovich's Yotian Soldier. Vulshok Gauntlets and Titanium Golem gave Ostrovich a little defense, and Taj-Nar Swordsmith searched up Scythe of the Wretched. Now, Ostrovich was able to go on the offensive, and still have a large creature on defense to protect him. This wouldn't last long, as Krempels' Exile was blocked by the Swordsmith holding the Scythe, and Turn to Dust was cast before combat to make it a 2-for-1 exchange. Pyrite Spellbomb gave Krempels another potential answer, and it took down Vedalken Archmage. Ostrovich's Titanium Golem was still a solid resource, and it was chump blocked by a Spikeshot Goblin. Skyhunter Patrol followed, and Ostrovich had enough mana left to give it the Gauntlets. It didn't matter, as Krempels had Detonate to win the match.