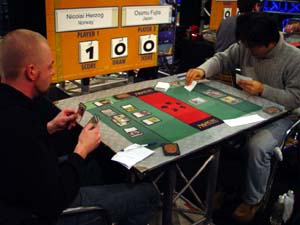 two are both Old Schoolers from their regions. Japan’s Osamu Fujita has been glowering his way to victory for some years now, and Norway’s Nicolai Herzog’s grin is practically trademarked. They also share the honor of having swept their first pod, well on their way to securing their seats for drafts three through five.

Herzog opened with Disciple of the Vault and then threw down Slagwurm Armor and Pyrite Spellbomb. Fujita made a mana Myr that was immediately outclassed by Spikeshot Goblin. Making the best of a bad situation, he dropped Barter in Blood to clear the board. As if to mock him, his deck served up Bonesplitter. He spent his Spellbomb on Fujita’s Vulshok Berserker, and when he drew a second Spikeshot Fujita returned the favor. Neither had a play. Fujita dropped a Viridian Longbow.

Fujita served up a Pewter Golem only to lose it to Herzog’s Irradiate. Finally Herzog drew a man: Copper Myr. He suited up with Bonesplitter. Fujita made a Vulshok Berserker and tried to ping the Myr, but Scale of Chiss-Goria made the rescue. Next came a very frightening Nim Lasher. Fujita made one of his own, but without Slagwurm Armor it was less than scary. He put his Longbow on it and took eight to the face. Herzog made a Diciple of the Vault and

He made no play on his turn. He chumped, drew, and scooped.

Herzog opened with Talisman of Dominance and a late Disciple of the Vault. He Bonesplittered it up but was stopped by a Shatter from Fujita. Fujita fought back with a Vulshok Berserker but it fell to Terror. Then Herzog dropped Nim Lasher and then Nim Shrieker. Unfortunately for him, Fujita had made a Pewter Golem and now had Viridian Longbow. It shot down the Shrieker before Herzog could find his Slagwurm Armor. 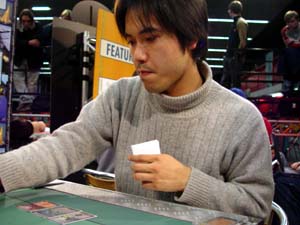 Fujita made a Lasher of his own after falling to nine from Herzog’s. He hid behind his regenerating blocker. Herzog matched his Pewter Golem, and a turn later swung in. Irradiate took down his golem, and Fujita double blocked with Lasher and Pewter Golem to take down Herzog’s Lasher. Both went to the graveyard.

Now things were at a standstill. Herzog found a Spikeshot Goblin and couldn’t get the Armor onto it fast enough. He also had a Krark-Clan Grunt and Nuisance Engine helping his Bottle Gnomes fight past Fujita’s lone blocker. He drew dud after dud, and when Herzog found a second Spikeshot, that was game.