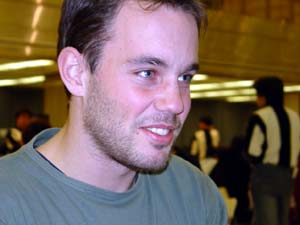 Prix Juggernaut Ben Stark was fresh off of his first Pro Tour Top 8 in Kobe where he lost to Ruel's countryman Gabriel Nassif. Antoine Ruel also has a Top 8 to his credit, although it was his brother Olivier who accomplished the feat most recently. They may be the only brother combination with individual Top 8s to each of their names.

This was not the first time these two players had faced each other. Antoine recalled a match they played at Pro Tour Houston that was not to his liking, "Do you remember the last time we played each other? You discarded on turn two, three, and four. You still won."

"That was in Houston?" Ben shrugged as he remembered the match and fondly recalled his Pattern Ghoul deck, "Pattern is like that."

Neither player was confident in the decks they had been given to work with. Ben did not anticipate a repeat of Kansas City where he was 8-0 on day one. Ben's deck was base white with a splash in both red and green. It looked to be a difficult deck to build and will no doubt be dissected in a future column by Stark for the website he writes for. He had a couple of bombs in Megatog and Grab the Reins but his mana was dubious as was he of his chances.

Ruel was green-red. His mana base was better than his opponent's but he had no bombs to speak of. Lodestone Myr is a fine card but no one prays for it when the decks are being handed out. He did have a Flamebreak but it was residing in his sideboard.

Antoine kept his opening hand but Ben did not. His next set of six was fine and they were off.

Antoine had an Arcbound Slith and Ben was pained to have no turn two play. Ruel plopped down a Talisman and a Silver Myr before attacking for one. Ben had the third turn Razor Golem but it was promptly killed with a fourth turn Creeping Mold.

Ben ambushed the Silver Myr with Needlebug on the next attack while the Arcbound Slith continued to grow. Antoine Deconstructed it post attack and played his own Needlebug with the green mana. Ben rolled his eyes as he played a Megatog without an artifact in sight, "Grand, huh?"

The Tog got in the way of the Needlebug but Ruel had Barbed Lightning to finish it off. Ben seemed chagrined to pay seven mana on the next turn for a Myr Enforcer which promptly blocked when Ruel played the Vulshok Morningstar and slapped it on his Slith.

Ben had a Skyhunter Patrol and Copper Myr on his next turn and delayed the inevitable by chumping with the mana man. He played a Goblin Charbelcher the turn following and hoped for the best. He stacked first strike damage and hoped to get to five with the Belcher. He only got to one. He untapped and laughed, "What do I need now, seven?"

He missed and reached for his sideboard.

Ben went back for six cards again. He kept the next six but only had one land. He did not find another for several turns while Ruel played Silver Myr and Spikeshot Goblin. He found his second plains and put out a Leonin Skyhunter.

Ruel put out an Arcbound Slith and Ben blocked it the following turn. When Ruel tried to finish it off with his Goblin, Ben made it a 3/3 with his Test of Faith. Ben was still stuck on two lands and played a Morningstar. Ruel had a Vulshok Gauntlets and Goblin Replica on the bracketing turns. 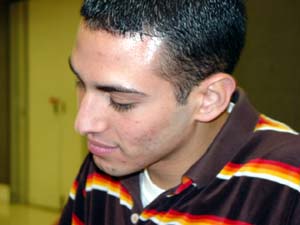 Ben tried to buy a turn with Copper Myr and it was shot down on the next turn. Ruel kept up the pressure with a pair of Tel-Jilad Wolves. Ben scuffled to stay alive with Awe Strike but the mounting pressure was too much and he finally conceded.

Ben was gracious in defeat, "Not your fault, they were not the greatest games but not your fault. I would almost never keep a one land hand on the play but I had two drops and I had already mulliganed."

Ruel nodded, "I kept a one-lander myself."