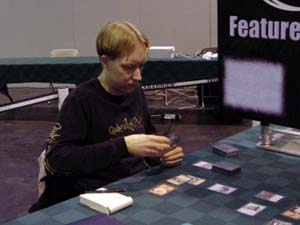 Jorstedt from Sweden had red-hot last season with a couple of Pro Tour top 8 and a title in Yokohama to cap it off. Siron from Belgium had a good season a couple of years back where he finished 9th at PT Osaka but has been quiet of late.

Siron opened with a Copper Myr, but couldn't accelerate to anything and played a Krark-Clan Stoker instead. Jorstedt went with a Pteron Ghost, but had nothing to follow with.

Siron missed a land drop and summoned a Goblin Replica. Jorstedt copied it with a Sculpting Steel and brought out Skullclamp. Echoing Decay got rid of the bogus Replica and Lightning Greaves meant Siron's could be kept safe until it was needed.

Jorstedt made a Frogmite and equipped it with the Skullclamp. Siron thought for a while and decided to continue to be aggressive. An Electrostatic Bolt took down the Frogmite at the cost of giving the Swede two cards. It enabled Siron to attack and drop Jorstedt to 9.

Jorstedt brought out an Oxidda Golem, but forewent its haste in favour of leaving it behind on defence with a Skullclamp.

Siron's mana was giving him problems. He sacc'ed the Greaves to the Stoker just so he could bust out a Pewter Golem. Jorstedt killed it with Barbed Lightning. Siron had to continue the aggressive option. Another Echoing Ruin got rid of the Oxidda Golem, but the card advantage was starting to kick in.

Jorstedt bolted the Goblin Replica and then dropped a Razor Golem for free and made it massive with a Leonin Scimitar, Vulshok Morningstar and Skullclamp. Siron managed to get rid of it by blocking with a Nim Replica and an entwined Barbed Lighting that took Jorstedt to 4.

That was as close as he got. A Den Guard came out and was made equally massive and Blinding Beam cleared the road for the swede to win the game in a couple of attacks.

Siron started aggressively with a turn 3 Scavenging Scarab and followed it with a Goblin Replica and bolted Jorstedt's Transfixer.

Jorstedt meanwhile had a bunch of Myrs, but then the Skullclamp came out again to give those myrs something useful to do. A Spectre's Shroud on a Pteron Ghost took the last card from Siron's hand, a Dross Golem, and then returned again for a Krark-Clan Stoker as Siron was forced to pop the Replica on the Skullclamp before things started getting too silly. 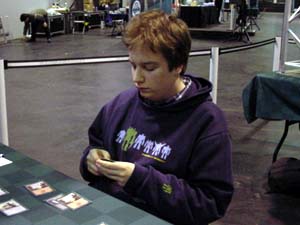 Siron still had the Scarab and the life advantage, but his deck was running out of steam again. Jorstedt brought out a Haematite Golem and gave it a Leonin Scimitar to hold the pesky bug at bay.

Jorstedt was more interested in attacking and smashed with the Golem.