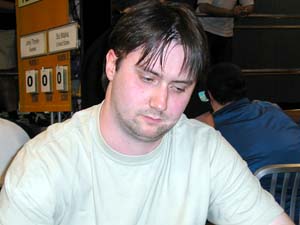 conversation at the table shifted to the Invitational right away. Specifically, Osyp was telling stories about the press training the players had to go through, and how rigid Kai Budde was through most if it.

Osyp- "You should have seen Kai during the press training. One of the questions was. 'Do you enjoy the fantasy aspect of the game?' (shifts into mock German accent) 'I don't care for it.'"

Jonsson played a Necrogen Spellbomb, and Lebedowicz summoned Leonin Skyhunter. Jonsson accelerated with Iron Myr, and the Hunter attacked for two before being joined by Leonin Den-Guard and Auriok Bladewarden. Jonsson played Spikeshot Goblin, and Lebedowicz played Steel Wall along with Vulshok Gauntlets. Another Myr along with a Viridian Longbow improved Jonsson's side a bit, but he was still far behind. Lebedowicz actually started complaining a bit, despite being ahead on tempo by a significant margin.

Lebedowicz - "You got all those cards? I didn't see anything that good in the draft. Okay, I'll attack you."
Jonsson- "…I take eight."

Even though he sounded somewhat despondent, Jonsson was able to catch up. He played Chittering Rats and Drill-Skimmer, and seemed to have things close to being under control. Another Gauntlets swung things back in Lebedowicz's favor, and both equipments went on the Den-Guard, making it a monster. Jonsson had to throw all of his creatures in front of it to take care of the problem, and when Lebedowicz played a Grimclaw Bats that was enough to finish it.

Lebedowicz mentioned that everyone should tune into Playboy TV next week, to see his interview from the Invitational. "It was me and Justin Gary. I had to do all the talking though, he was nervous"

Jonsson had a first turn Slagwurm Armor, and a second turn two Slith Firewalker. Lebedowicz openly prayed for a Steel Wall, but it didn't come. He did have a Silver Myr, and the Slith got through again to become 3/3.

(Jonsson burps)
Lebedowicz- "Do you mind?"
Jonsson- "I'm from Sweden, we don't care about these things. I'm a barbarian."

Lebedowicz played Scavenging Scarab, and gave it the Gauntlets. Jonsson threw a team in front of it, and Consume Spirit dealt enough damage to finish off the Slith. Thanks to Irradiate, Jonsson killed off the Razor Golem to leave Lebedowicz with no creatures, and clear the way for a big attack. His body language suggested that he felt the result of the game was inevitable, but Soul Nova on the following attack dealt with the Armor and a Dross Golem. Lebedowicz drew Leonin Skyhunter, and gave it the Gauntlets to stabilize the board. Both players simply drew and said go for a few turns, until Jonsson finally attacked with his Myr and Rats. The Hunter blocked the Rats, and Jonsson finished it a turn later with Fireball.

Once again, Lebedowicz had a turn two Leonin Skyhunter. 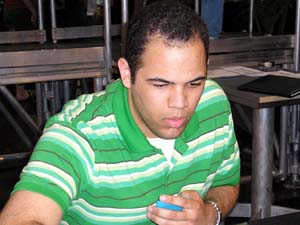 Jonsson- "You are so lucky!"
Lebedowicz- "Why are you so mean?"

Jonsson played Goblin Archeologist, and a Viridian Longbow on the following turn. Lebedowicz's Scavenging Scarab traded with Nim Lasher during an attack. Gauntlets went on a Den-Guard, but Jonsson had a Shatter. Thanks to moving the Longbow, the Skyhunter died as well. Lebedowicz played Razor Golem, and Jonsson had another answer in Echoing Ruin. Dross Scorpion provided another body, unspectacular as it might have been. With Lebedowicz far behind and at a lack of resources, Jonsson played Vulshok Berserker to push things further in his favor. A few turns later, the game was over.