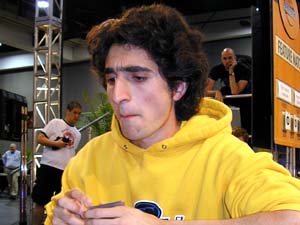 Nassif is trying to win the Pro Player of the Year Race. He came into this tournament in a dead heat with Rickard Osterberg at fifty-nine points. Both players were looking in their rear view mirrors at the relentless Kai Budde who was in pursuit of the duo at forty-five points. Gabriel was hoping for a strong performance this weekend to put some distance between him and Rickard as well as to pull further away from Kai. The only problem with that plan is that this is a Limited event and all of Nassif's high finishes this year came at constructed tournaments, including two constructed Pro Tour finals. The French player is notorious for not doing well at Limited tournaments.

He was 3-1 to this point and facing off against his countryman Olivier Ruel. Olivier has only one Pro Tour Top 8 this season but it was at the Limited Pro Tour in Amsterdam. He is fifteenth in the Player of the Year Race with thirty-one points and would need a couple of very strong finishes to make up the ground between himself and the frontrunners. A win here would be a step in the right direction although the always whimsical Ruel had a different reason for wanting to win. "I just beat Jon Finkel. That means I am the best player in the world. If I can beat Gabriel then I will be the best player in France as well."

Gabriel shipped back his opening hand while Olivier gleefully kept his hand with two Plains, two Razor Golems, Vulshok Gauntlets, Longbow, and Betrayal of the Flesh. He led off with two Plains and the pair of equipments while Gabriel had a turn two Engineer. Olivier's deck rewarded him with a Plains off the top and he played a Razor Golem right on time.

Gabriel had an Iron Myr and passed the turn. Olivier beat in for three and made a second Golem and an Auriok Glavemaster. Nassif played Quicksilver Behemoth but had to chump the Golem with his Engineer after Olivier equipped it with the Gauntlets and played a Leonin Scimitar in his second main phase.

Nassif passed the turn and Olivier played an Auriok Steelshaper. He moved the Scimitar to his second Golem and sent them both into battle--shooting Iron Myr with his Longbowed Glavemaster. Nassif cast murderous Spoils and took the Gauntlets but also took four from the other Golem. Nassif was at thirteen.

He untapped and played an Icy Manipulator that Ruel did not seem pleased to see although he did have a Goblin Replica that would have to wait until next turn to take out the Alpha reprint. Nassif fortified with a Myr Enforcer and Ruel shot him at the end of turn. He untapped to four mana and the ability to destroy the Icy. Gabriel's attention was drawn from the match by Osyp's banter.

With Gabriel finally paying attention to him, Olivier announced his attack and Nassif had no effects. Olivier sent his Razor Golem into the red zone and immediately saw the error of his ways as the Behemoth blocked and ate it. "You don't have to put that in the coverage you know." Ruel killed the Icy Manipulator during his second main phase.

Nassif played Elf Replica and equipped it with the Gauntlets rather than replaying the Behemoth. Ruel pecked away with the Longbow. Ruel rearranged his equipment so that the Scimitar was on the Glavemaster and the Longbow on the Steelshaper. Nassif double blocked the 4/4 first striker and Olivier took down the Myr Enforcer leaving the equipped Elf Replica.

Nassif attacked for six with his Replica and then replayed the Behemoth and moved the Gauntlets over onto it. Ruel played a Loxodon Mystic but Nassif was fearless and sent in his Behemoth and dropped Ruel to six. He picked up the Behemoth and replayed it with enough mana to equip the Elf Replica. Ruel shot his countryman and the life totals were nine to six in Nassif's favor.

Ruel tapped the Elf Replica on Nassif's next attack step. When the Behemoth attacked anyway it was ambushed by a pair of 2/2 Raise the Alarm tokens. Nassif made them smaller by Terroring the Steelshaper. Nassif ate the two tokens and replayed his Behemoth.

Ruel played Taj-Nar Swordsmith but chose not to pay anything extra instead leaving one white open to tap a creature. Nassif moved his equipment to the Replica and when it was tapped got in for four more with the Behemoth. Olivier tapped the recast and equipped Behemoth on is next turn and moved both the Scimitar and the Longbow over to the Swordsmith. Nassif had to move his equipment over to his Elf Replica and trade it with the Swordsmith. He played a Nim Replica and moved the Gauntlets onto it. Ruel needed another creature or black mana for the Betrayal he was holding all game long. He found neither. Throwing away the Razor Golem had likely cost him the game.

Ruel came out of the gates racing against the dwindling time remaining. His first three plays were Longbow, Gauntlets and Spikeshot--Nassif killed he Goblin with Terror and played an Elf Replica. Ruel had a turn four Razor Golem. Nassif played a turn four Arcbound Crusher. Ruel got in for seven with his Golem but Nassif's draw was very good. When he untapped the Crusher quickly grew to a 4/4 thanks to an artifact land, Myr Enforcer and Welding Jar.

Ruel had a Loxodon Mystic but Nassif untapped and took the Gauntlets with Murderous Spoils--disposing of the Golem in the process. Another Artifact land made his Golem a 5/5. It became a 7/7 thanks to Ruel's Yotian Soldier and another artifact land from Nassif. Nassif moved the Gauntlets onto his Replica and announced an attack. Ruel tapped the Crusher but fell to one from the rest of Gabe's army.

Ruel moved the Longbow to his Yotian and passed the turn. He tapped the Crusher and when Ruel sent in the Enforcer he Raised the Alarm and chumped the Enforcer with one of the tokens. Nassif played a Skeleton Shard and passed. Ruel put a Morningstar in the hands of his Yotian and got in for four damage--it was seven to one. When Ruel thwarted Gabriel's attack on the next turn he played a Behemoth and moved his Gauntlets to the Enforcer.

Ruel played a second Mystic and passed the turn without an attack. He tapped the now 9/9 Crusher on Nassif's next attack and sent everyone else into battle. Ruel blocked the Replica with his freshly cast Mystic, chumped the Enforcer with a token, and the Behemoth bounced off the Yotian Soldier. Ruel plinked Nassif down to five. Gabe had saved his Elf Replica with Welding Jar played another and replayed the Behemoth but Ruel showed him the Betrayal of Flesh in hand--no matter how you sliced it Ruel had a lethal attack on his turn. They moved to Game 3 with less than ten minutes remaining.

The third game moved at an urgent pace. Gabriel had the first creature--a turn three Nim Replica, but it died on Ruel's third turn thanks to a Talisman enabled Granite Shard. Ruel followed with a Razor Golem and equipped it with a Leonin Scimitar. Gabriel had Rustspore Ram but had to aim it at a Viridian Longbow or Ruel would be able to kill any two toughness creature with ease.

Ruel kept up the pressure with his 4/5 Razor Golem and played a Loxodon Mystic. Gabriel played a Behemoth. Since time was a factor, Olivier did not seem confident that he could wait a whole turn to tap the Behemoth and then attack and just ran his Golem into the jaws of the Behemoth and the Rustspore Ram.

Ruel had an Auriok Glavemaster and it took the Scimitar but not for long as Nassif had a Skeleton Shard and was able to pick up the Ram and kill the Scimitar. He played a Crusher that got locked into orbit with the Mystic. The Mystic could never tap anything else as the Crusher quickly grew to a 10/10 with Nassif's supply of artifact lands and his Skeleton Shard. 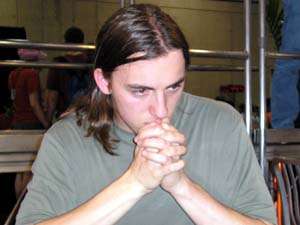 Gabriel Nassif was now 4-1 and closer to securing a berth on Day two of this Limited Pro Tour and securing his lead as the Player of the Year.