and we get to see Belgium's top player of the moment, Geoffrey Siron, playing against Austrian rising star Nikolaus Eigner. Eigner won the die roll and elected to make Siron lead off. 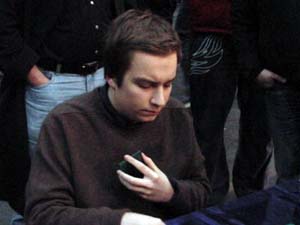 Both players came out of the blocks with Civic Wayfinders. Siron followed with a Mortipede, while Eigner managed a Shambling Shell. A Last Gasp allowed Siron to push through four extra damage with the giant undead centipede thingy, but the early lead was immediately negated with a Ribbons of Night on the Mortipede.

A Grave-Shell Scarab put a frown on Eigner's face. I remember Karsten telling me he wasn't overly excited by one of the original hyped rares from Ravnica (he was talking about constructed) but a permanent 4/4 in limited is fairly scary.

Eigner's Sewerdreg gave him the option to race though. The game looked interestingly poised. A Brainspoil from Eigner on Siron's Tattered Drake kept the runners reasonably level. Eigner brought himself more of a lead as a Lurking Informant threw itself heroically in the path of the giant beetle.

This turned out to be a decisive block (and one I must admit I wouldn't have made). Siron was holding Vigor Mortis. He wanted to reanimate his Mortipede and then attack for lethal damage using the Mortipede's lure ability on the following turn. By throwing away his Informant to deny four damage, even from a healthy (ish) looking ten life Eigner denied that option to Siron.

This gave the impetous back to Eigner. He chose the risky option of putting all his eggs in a Sewerdreg-shaped basket as he dredged back Shambling Shell and immediately sac'ed it to turn the unblockable Sewerdreg into a 4/4. A repeat of the play would make the Sewerdreg lethal on the following turn, but if Siron was able to deal with the swampwalker, then Eigner's board would be too weak to recover.

As it happened the Austrian had gambled perfectly. Siron was unable to find an answer, despite sac'ing his Scarab for a card.

Game 2 looked like it might have been danger of going long as both players found early Stinkweed Imps. But rather than stare at each other indefinitely an attack instigated by Eigner had both Imps cartwheeling into the graveyard in a bundle of claws, wings and insults.

The second game looked like it was settling into a re-run of the first as Eigner again found his Sewerdreg, a creature Siron couldn't block, while the Belgian had his Grave-Shell Scarab, a creature Eigner couldn't kill. 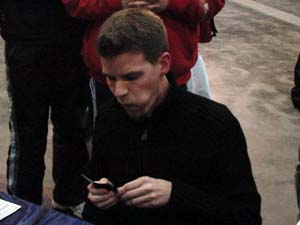 The turn Siron made the Scarab again turned out to decide the game, although it was not immediately apparent to me as I watched. Siron had a Brainspoil in hand, but wanted to make the optimal play of summoning first the Scarab and then removing the Sewerdreg. Unfortunately for him Eigner played Strands of Undeath, meaning the Sewerdreg was now immune to Brainspoil.

The Brainspoil was used instead on a Dimir Houseguard to put Siron through for six damage. But after that the board snarled up in Imp standoff. A Vedalken Dimisser bounced the Sewerdreg, but it came back and again a Shambling Shell was used to pump it up to lethal levels.

Siron could only reflect that sometimes things just don't go your way.