For our round 5 feature match, we invited the teams of Raphael Levy, Melissa DeTora and Jeremie Dezani as well as Owen Turtenwald, William Jensen and Reid Duke to our feature match table. This lead to the following matches:

Before things were really underway on table A (all that happened up to this point were Turtenwald's Traveling Philosopher trading with Levy's Swordwise Centaur), Melissa DeTora was already shuffled up her cards. 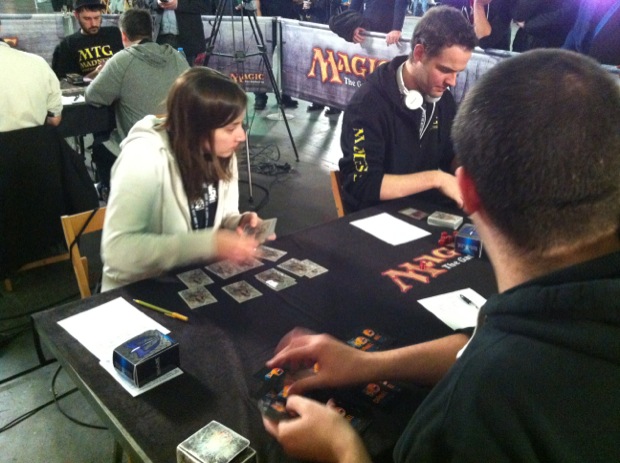 "She got horribly mana screwed", her opponent William Jensen just told me. 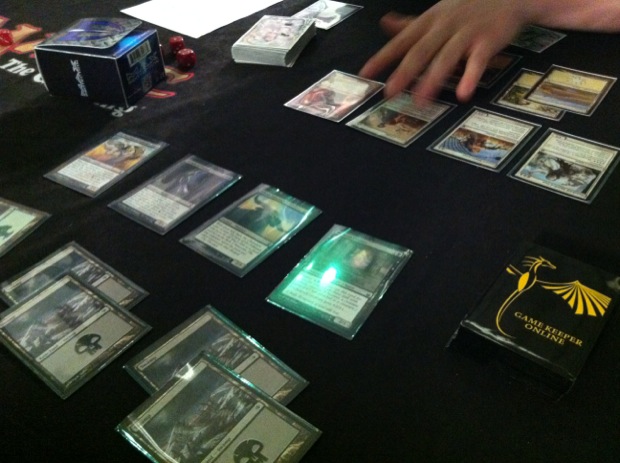 Reid Duke just invited a Gray, Merchant of Asphostel to his party that was already sporting Disciple of Phenax, Felhide Minotaur and Nyxborn Eidolon. Since Dezani also had quite the field with Hundred-Handed One, Leonin Snarecaster, Hero of Iroas and Akroan Crusader, the game felt more like a Mexican standoff than anything else.

That changed rather quickly, however, since Duke found a Sip of Hemlock to get rid of the Akroan Conscriptor and a little later, he also took out Hundred-Handed One. Dezani was left with only 10 life and he tried to fight back with a Bolt of Keranos, but this didn't look too promising... 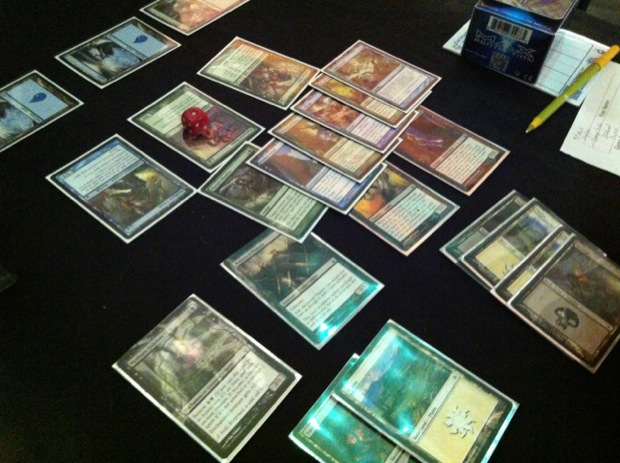 Melissa DeTora just took a look at William Jensen's hand and she didn't like the things that were waiting for her. Then again, her opponent was missing the necessary mana to cast half of his threats, so she might end up victorious anyway. 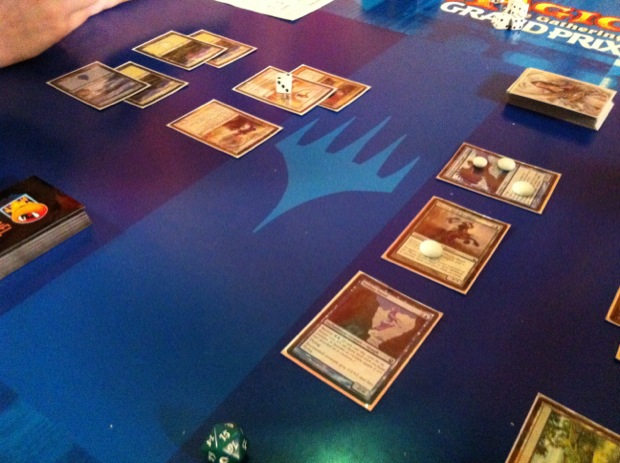 Owen Turtenwald asked his teammate William Jensen: "Is there any green instant you can think of that could help him (Raphael Levy) survive?"

Turtenwald went for it, Levy didn't have an answer and that meant that the American team was now leading in 2 individual games!

Ah, excuse me, make that 3. Dezani couldn't come back from the bad position that Duke left him in earlier... 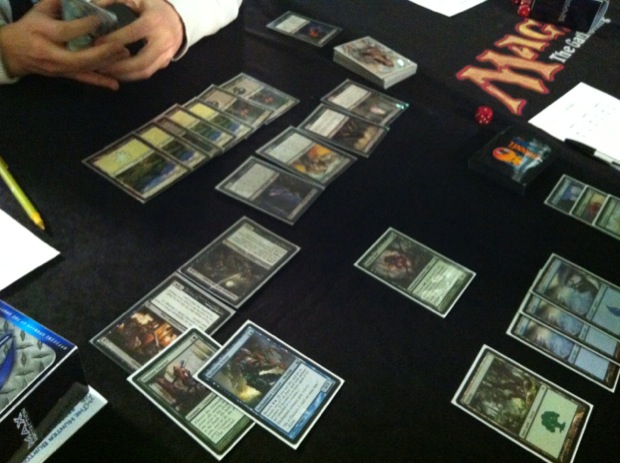 Meanwhile, DeTora was well on her way of turning things around for her team. Jensen had to use 2 creatures to block one of her attackers and if it weren't for a timely Griptide, the scores could have looked a lot better for DeTora's team. Still, she was able to apply more pressure with Fate Unraveler while Jensen was still waiting for his deck to provide him with more mana. 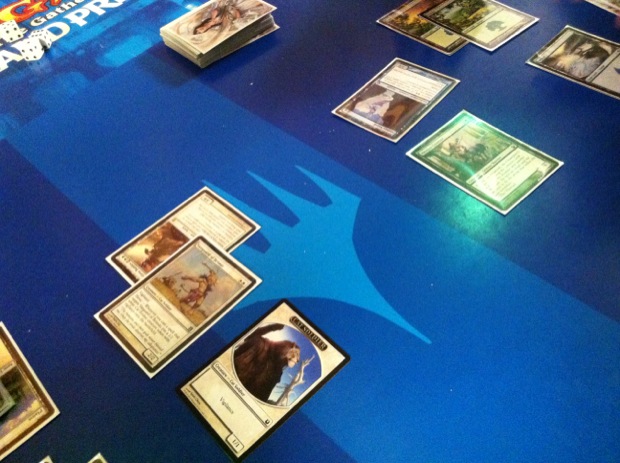 Thanks to Vanguard of Brimaz, Turtenwald was able to put Raphael Levy under a lot of pressure once again. The French attacked on his turn with Nimbus Najad before adding Nyxborn Wolf, providing him with 2 blockers. This game was far from being decided. 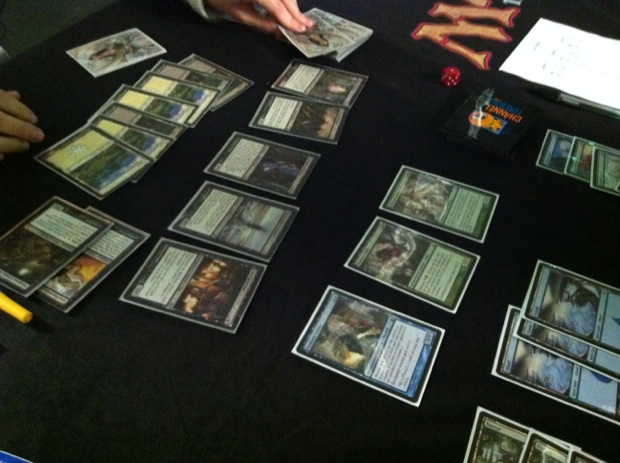 On the left, you see the field of Melissa DeToro. She just attacked with Fate Unraveler, making it 3 life for William Jensen. Gray Merchant of Asphodel made it 2 and that's when the American shuffled up.

On the third table, Jeremie Dezani and Reid Duke were busy trading blows; a Favored Hoplite was Dezani's best threat and thanks to a Titan's Strength, it was able to dish out quite a bit of damage. Dezani added Spearpoint Oread and he passed play. It seemed like he was sitting in the driver's seat for once.

Duke on the other hand had a Insatiable Harpy that turned this race into a rather one-sided affair; with no way to block it, Dezani had to watch it turning the life totals in Duke's favor. Disciple of Phenax and Ragemonger were the other creatures on Duke's field.

Dezani continued trying to race his opponent, with a Coordinated Assault making sure that he would get to keep his attackers when Disciple of Phenax attempted to block. Still, Duke could continue his onslaught almost unapposed thanks to his Flying creature. Guardians of Meletis would give him even more time to stabilize and let the Harpy do its dirty work. 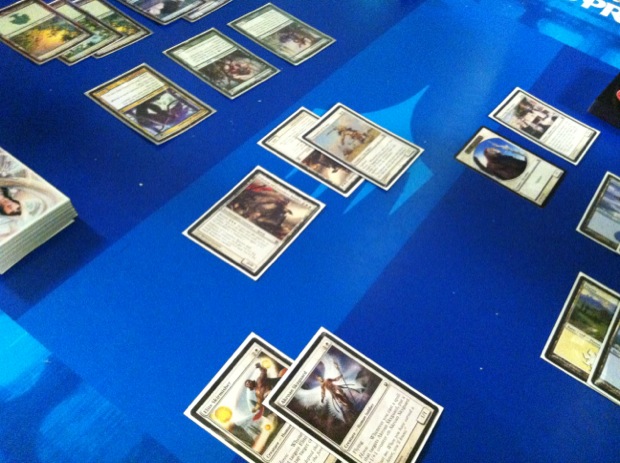 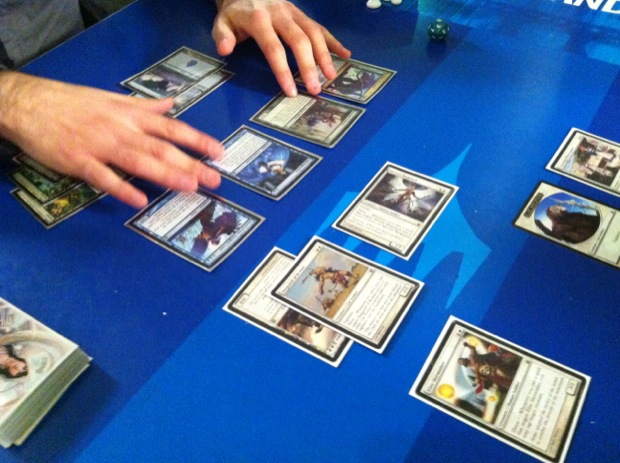 The following turn, Vanguard of Brimaz and Akroan Skyguard attacked. Levy cast Siren of the Fanged Coast, but it received counters just as expected. A Sudden Storm then tapped both it and Omenspeaker, so Levy was forced to block with Nessian Courser. He was falling behind and fast!

In the meantime, Melissa DeToro had turned things around against William Jensen, thanks to Jensen being a lot less lucky with his draws in both the second and the third game, not finding enough mana to put up a real fight.

That allowed for some rearrangements on the tables; Raphael Levy was suddenly up against 3 Americans!

"I'm not going to win this", he said. He lost Prophet of Kruphix when it blocked Wingsteed Rider, which lead to this very one-sided board position. 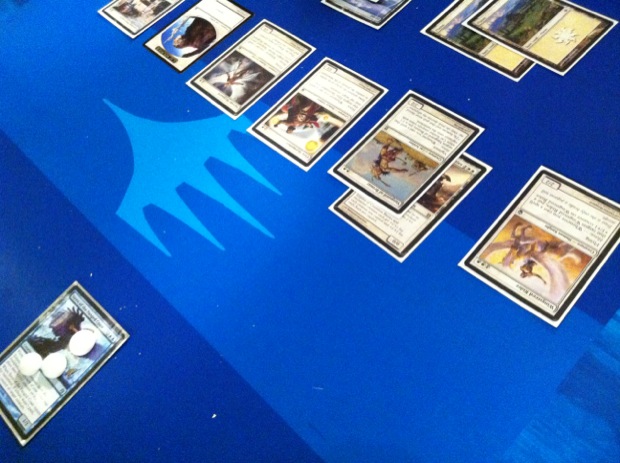 When Turtenwald found another enchantment on his following turn, Levy quickly extended the hand.