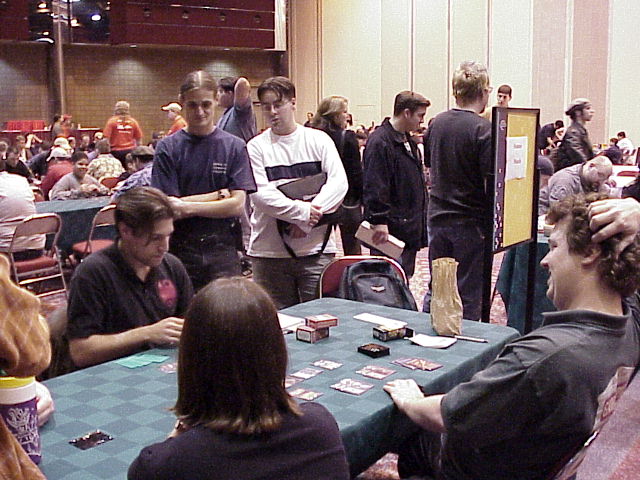 Alan Comer is a long time pro player, being on tour fairly consistently since the Carter administration, and is playing a RBU powerhouse deck featuring a Pyre Zombie. Danny Mandel is a member of Your Move Games, on a bit of a hot streak, finishing 9th in GP Dallas and qualifying for Tokyo in the last week of the season by winning the Boston PTQ, and is (predictably) playing RBU. Both players are very laid back and friendly, and there was a lot of friendly banter during the match.

Comer started off on a low note, having to mulligan - not an auspicious beginning for his mana-hungry deck. Danny played first with an island, and Alan followed suit. Danny dropped a Dream Thrush and Alan played a mountain. Danny attacked for 1 with the Thrush (Comer: 19) and played for tempo, dropping a Swamp and Recoiling Alan's Mountain. Alan drew and replayed his Mountain, later commenting (tongue in cheek) that the Recoil actually allowed him to hide his poor mana draw. Danny attacked with the Thrush (Comer: 18), played a swamp and played a Trench Wurm. Alan played a Mountain and a Kavu Aggressor, which was of little help against the early pressure Danny was applying. Danny drew, played a Chromatic Sphere and swung for 4 (Comer: 14). Alan played a mountain, attacked with the Aggressor (Mandel: 17) and dropped an Ancient Kavu. During Alan's end step, Danny cast his second Recoil on the Ancient Kavu, breaking the Chromatic Sphere to draw a card. Danny poured on the offense, casting a kicked Pouncing Kavu and swinging for 7 (Comer: 7). Alan drew, missed a land drop, and attacked with the Aggressor (Mandel: 14), re-casting the Ancient Kavu. Mandel, at the end of Alan's turn, cast his third Recoil (yes, 3 Recoils) on the Ancient Kavu, and Alan scoops. 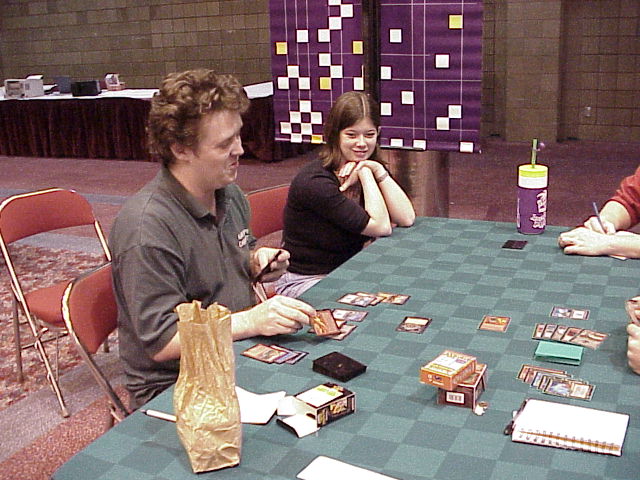 Comer opted to play first, and played a Sulfur Vent (producing black). Danny play a swamp. Alan and Danny both laid mountains, and Alan followed with an island and a 2/2 Kavu Scout. Danny was short on islands, and played a second mountain and passed the turn. Alan attacked for 2 with the Scout (Mandel: 18) and played a second island. Danny dropped a fourth land and cast Ancient Kavu, which Alan Excluded. Alan kept up the pressure, swinging for 2 with the Scout (Mandel: 16) and playing a Tower Drake. Danny still could not find an island, but found the next best thing - a Chromatic Sphere. Danny played the Sphere, broke it for blue mana, drawing an island. Danny played the island and Repulsed the Drake, buying himself development time and drawing another card off the cantrip effect. Alan drew, attacked with the Scout (Mandel: 14) and cast a Phyrexian Slayer, showing off his array of flyers. Danny drew and played a 6th land. Relying on his recently acquired "trademark card" Danny Recoils both the Slayer and the Scout, with Comer discarding a mountain and the Scout. Comer replayed the Slayer and Mandel went on the offensive with a kicked Pouncing Kavu (Comer: 17).

Comer draws and exclaims "ooh!". Danny replied "Ooh? Don't 'ooh'! I hate 'ooh'!" Comer plays his first actual swamp, attacks with Slayer (Mandel: 14) and solves the Kavu problem with a Tribal Flames for 3. Comer re-cast the Tower drake and passed the turn. Danny cast his 2nd kicked Pouncing Kavu and attacked (Comer: 14). Comer swung with the Slayer and the Drake (Mandel: 10) and followed with a kicked Urborg Emissary, sending the Kavu back to Danny's hand. Searching for some relief, Danny cast Worldly Counsel during Alan's end step, but found no immediate help, taking a second Worldly Counsel. Danny drew into a Recoil and re-cast the Pouncing Kavu, but kept it back to defend against the Urborg Emissary. Alan drew, served with the Drake and the Slayer (Mandel: 6) and passed the turn. Danny cast his second Worldly Counsel during Alan's end step and selected a Faerie Squadron. Danny drew into a Recoil, but was pressed to cast the kicked Faerie Squadron and hope for Alan to be out of gas. Alan, however, had plenty of power left, Repulsing the Squadron at the end of Danny's turn. Danny said "boy, I sure wish I had a Squadron in play." to which Alan replied "Well, you are going to wish you had a Kavu in play in a minute," as he Plague Spored the Kavu and swings for the win.

In the rubber match, Danny took a risk, keeping a 2 swamp draw with 5 blue and red spells, including a Worldly Counsel and a Kavu Scout, but caught a bit of a break when Alan mulliganed for the second time in three games. Danny played out his two swamps, and Alan a mountain and an island, without Danny drawing the critical non-swamp land. However, on his third turn, Danny worked his YMG magic and peeled an island, allowing his to set up a Worldly Counsel at the end of Alan's uneventful turn., which yielded a Repulse. 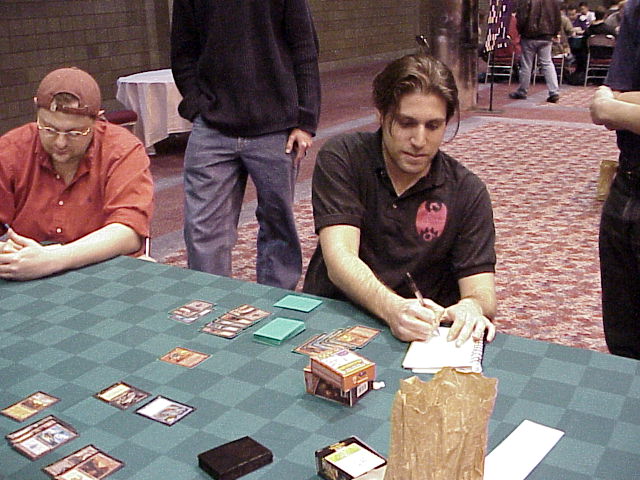 Danny played a mountain on his turn and cast a Kavu Scout. Alan, having a shortage of action cards, Repulsed the Scout to buy some time and dig further into his deck. On his turn, Alan dropped a swamp and, for the first time this match, the Pyre Zombie. Danny drew into a Cursed Flesh and, hoping to slow Alan down by making him recurse the Zombie, used the Cursed Flesh on the Zombie and re-cast the Scout. Alan dropped a Ravenous Rats, and knocked a mountain out of Danny's hand, and followed with a Tower Drake. Danny played a mountain and, despite having the mana to cast a kicked Pouncing Kavu, instead Repulsed the Tower Drake and attacked with the Scout (Comer: 17). Alan drew, and played Dromar's Attendant, expressing frustration that his single swamp left the powerful Zombie stranded in the graveyard. Danny's turn was uneventful, with him holding the Pouncing Kavu back as a surprise guest. Alan attacked with Dromar's Attendant (Mandel: 17) and recast the Tower Drake. Mandel decided it was time to turn up the heat and cast the kicked Pouncing Kavu, attacking unblocked for 6 (Comer: 11), and dropped the underrated Rogue Kavu. Alan again attacked with the Attendant, who went unblocked (Mandel: 14). On his next turn, Mandel alpha struck, and Comer made a play that can only be described as Savage. Alan blocked the Rogue Kavu with the Tower Drake and , before damage was on the stack, sacrificed the Attendant to add a black, white and blue mana to his pool. He pumped the toughness of the Tower Drake to 2, allowing it to survive the Rogue Kavu, and used his single swamp and the remaining 2 mana to cast Reckless Spite on the Pouncing Kavu and the Kavu Scout (Comer: 6), leaving Mandel's board empty, and leaving Comer with a Rat and a Drake. Before the end of his turn, however, Danny summoned a Trench Wurm to keep some degree of pressure on Alan, whose life was rapidly dwindling.

Alan drew, attacked with the Drake (Mandel: 12), and cast Mourning on the Wurm. Danny attacked with the 1/3 Wurm (Alan: 5), cast an ancient Kavu and passed the turn back to Alan. Alan, still needing a second swamp to recurse the Zombie, drew . . . not a swamp, cast a Kavu Scout and opted to hold the Drake back for defense. It was a good choice by Alan, in that Danny cast a kicked Shivan Emissary to destroy the Scout, and attacked with the Wurm and the Ancient Kavu. Alan double blocked the Kavu, traded the Drake for the Ancient Kavu and took 1 (Comer: 4). On his turn, Alan drew and cast a Phyrexian Reaper, and looked to have finally staunched the bleeding, but on Danny's turn, he essentially went off, casting in succession Chromatic Sphere, breaking the Sphere for black mana and drawing into Assault/Battery, cast Worldly Counsel for 3. The Counsel yielded a Recoil, which was used to bounce the Reaper, and allow Danny to attack for 2 with the Emissary and the Wurm (Comer: 2). Comer drew and recast the Reaper, but with the Assault/Battery in his hand, Danny was able to untap and deal the final 2 point to Alan.