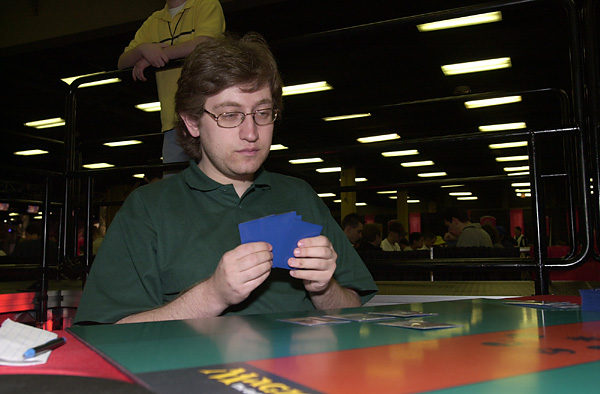 Ryan Fuller is the Canadian National Champion. He has placed highly in several Grand Prix such as Helsinki and Manchester, and a top four in the Kyoto Grand Prix. He was playing blue-white Blinding Angel control. Alex Shvartsman has ten Top 8 finishes at Grand Prix. He was playing mono-white rebels. Both were fresh back from the Magic Invitational in Sydney; and just yesterday, Alex pushed Ryan out of the Masters Series in the second round.

Alex won the roll and decided to go first. He mulliganed once; Ryan kept his initial hand. Alex established a beatdown chain, finding two quick Steadfast Guards and bringing Ryan down to 13 before the control player could bring down the Wrath of God. Quickly afterward, Lin Sivvi and a Blinding Angel glared at each other from across the board. (Well, that's not entirely accurate. The Angel began beating Alex down, while Lin Sivvi glared and occasionally recruited a poor Falcon to get plucked.)

At the end of Alex's eleventh turn, Ryan enjoyed one of the better Fact or Fictions played today, presenting Alex with Blinding Angel, Foil, Absorb, Misdirection, and Dismantling Blow. Alex put the first two and last three in separate piles; Ryan went for the Angel and Foil.

Even those two cards, however, could not stop the recursive power of Lin Sivvi. At 4 life, Ryan swung with an Angel, saw Alex flip yet another blocking Falcon into the air like a clay skeet, and decided that without stopping Alex's ability to attack, the game was unwinnable. He conceded. 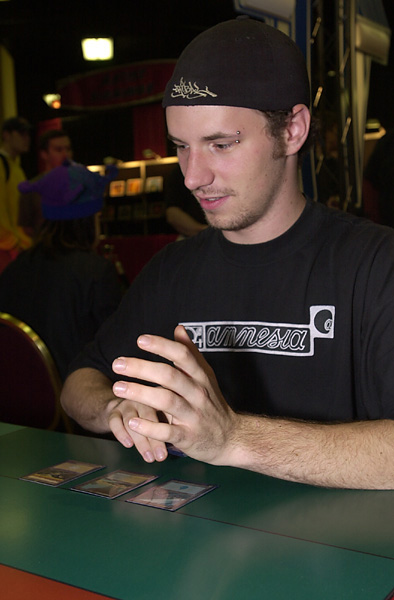 Ryan had sided in four Last Breaths as metagame against the rebel leader. This game started far more slowly, with six turns seeing two Lin Sivvi's removed from the game and Alex gaining life as if he was in a multiplayer chaos game. Ryan had certainly hoped Alex's deck only had two of the rebel leader; and he was visibly irritated to see a third Lin Sivvi appear a few turns later. She and a Falcon were swept by a Wrath of God. Alex spent the next turn clearing the rest of the board with Armageddon.

Mr. Shvartsman set up a new rebel chain quickly and finally began dealing damage. A Steadfast Guard, Ramosian Sergeant, and Crusade worked together to bring Ryan down to 12 life. Ryan worked his way back to five mana and cast a Blinding Angel that kept the late game interesting. Alex had to bide his time until he could search for his FOURTH Lin Sivvi - this pleased Mr. Fuller to no end - and when the blue mage used Mystical Tutor to get a Last Breath for her, she resurrected the Lin Sivvi that was in the graveyard on her way out the door.

With four rebels on the board and his opponent at ten life, Alex cast Crusade. Ryan attempted to Absorb it; but the Absorb got lost in a Power Sink. Commenting that he has been plagued by rebels all day, Ryan conceded gracefully.

Immediately upon resolution of the match, Alex's Defiant Falcons decided to organize into a union and protest their treatment as expendable, feathery fodder for really shiny angels with glowing swords. When this reporter left the Feature Match area, Mr. Shvartsman was hurriedly negotiating a collective bargaining agreement with them in preparation for the next round.