Round 5 Feature Match: All Bottled Up

off his 8th-place finish at last year's U.S. Nationals and 15th-place finish at the 2005 World Championships, Josh Ravitz had his choice to qualify on rating or by his Pro Club level. Tim Aten's team :B won Grand Prix-Chicago in 2004, and is here on the same gravy train combo as Ravitz. 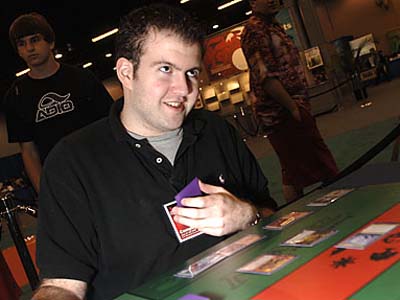 Is that a smile on Josh Ravitz's face?

Aten drafted a base-green deck that touched red, blue and black and featured Bottled Cloister and a host of Guildpact monsters. Ravitz sat down wielding a removal-heavy black-red-blue concoction that tops out at Niv-Mizzet, the Firemind. They both came off Round 4 victories looking to extend their win streaks.

Ravitz started the show with a Wee Dragonauts. Aten showed only forests, but had his own 1/3, a Silhana Starfletcher. Ravitz and Aten then both developed with a 3/3 apiece, Ravitz with a Viashino Fangtail facing down Aten's Simic Ragworm.

Ravitz deployed Entropic Eidolon while Aten found a Simic Growth Chamber that let him power out Torch Drake. The Fangtail active, Ravitz crashed the Red Zone with Eidolon and Dragonauts, but Aten was willing to fight, blocking with Drake and Starfletcher. Ravitz zotted Aten's only other creature, the Simic Ragworm, with Disembowel, which pumped the Dragonauts, then pinged the Starfletcher with Fangtail. Dragonauts fell to the Torch Drake, but when the dust cleared…

Aten committed another Starfletcher to his board of lonely lands - naming black, a color interestingly unavailable in his land mix.

Ravitz put the pedal down with Niv-Mizzet, the Firemind, but the dragon didn't survive Aten's mainphase Wrecking Ball cast thanks to that black splash. He had enough mana left over to drop Bottled Cloister.

Ravitz kept the pressure on while Aten drew nothing fancy out of that bottle. Ravitz's Fangtail kept the combat favorable for his creatures, and he kept up the assault with Helium Squirter. 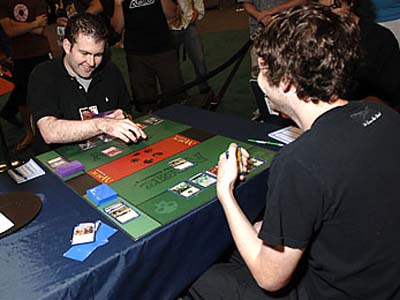 Ravitz and Aten traded a few barbs throughout the match.

One embarrassing 2/3 Ghor-Clan Savage later, Aten packed it up. He shook his head but took his disappointing Cloister draws with good humor.

Ravitz had access to three colors of mana by turn two off a quick Izzet Signet, which brought him Orzhov Euthanist. A grinning Aten shoved his Surveilling Sprite deep, deep past the Red Zone, even pushing around some of Ravitz's permanents, but still only did one. He made a Simic Ragworm.

Ravitz's Orzhov Euthanist showed no fear of the 3/3 and got in there. Aten, amused, took the 2, and the Ragworm died to Last Gasp anyway. Surveilling Sprite got in for a point -

- which enabled a fully-charged 5/6 Ghor-Clan Savage. Ravitz's gutsy Orzhov Euthanist got in for 2 unblocked points again, but the counterattack from the flyer and the 5/6 brought down a bloodthirsted Scab-Clan Mauler.

Ravitz: "Attack with Euthanist?"
Aten: "Okay I'll take it again, it's been working well so far."

Getting no bites on the Little Euthanist That Could, Ravitz had to play his second Orzhov Euthanist and Mausoleum Turnkey - on a creatureless graveyard - to begin the chumping process.

Aten crashed in and only lost the Mauler, replacing it with a Helium Squirter, and Ravitz scooped it up.

Aten ramped with Farseek while Ravitz played relatively fair with an Izzet Boilerworks and basic lands. Aten asked once again whether he was walking into Runeboggle, but his Simic Ragworm hit play unmolested. But then -

Aten tried a Torch Drake, then swung into Ravitz's fresh Helium Squirter. It got through, allowing a big turn of a bloodthirsted Scab-Clan Mauler and a Silhana Starfletcher. Ravitz crashed right back and made a second Helium Squirter, grafting the new kid up to 4/4.

Aten showed enough mana to pump Torch Drake twice, and swung in with it.

Aten duly pumped, forcing a trade, and Aten made a second Starfletcher. Ravitz untapped and showed his plan by getting back the Squirter with Mausoleum Turnkey, which he grafted to 4/3.

Aten showed off his mana production capabilities by tapping out for a Sporeback Troll and Bottled Cloister. Ravitz took the opportunity to Cackling Flames the Troll, but needed some gas fast to keep up with the Cloister.

Drawing two cards per turn now, Aten plunked down a surprise Stalking Vengeance and got in there with the 5/5 Avatar and his Mauler. Ravitz shook his head, and took 8 despite trading the Mauler with his Turnkey.

Ravitz tried to construct a defense force, but Aten's personal Howling Mine combined with the Stalking Vengeance's pings overwhelmed Ravitz in both card advantage and life. Aten's sequence of Elvish Skysweeper, Belltower Sphinx and Gruul Nodorog chopped Ravitz's options to nil, and Ravitz extended the hand.