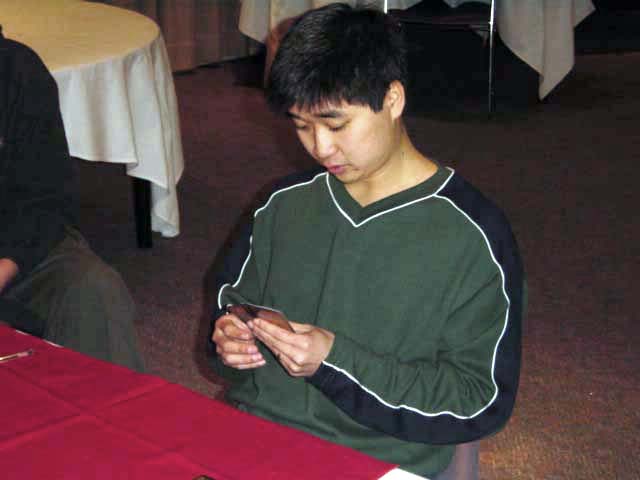 Both these players were on 4-0 records coming into this match. Chris Kwan was packing his speedy Red/Black beatdown deck and Andrew Gordon had an equally quick White/Green/Red deck. However, Gordon's deck didn't like drawing red mana in this match up, so it was more of a White/Green versus Red/Black duel.

Both players had very slow starts, which was especially surprising considering how fast their decks were supposed to be. Finally on Kwan's third turn he dropped a Phyrexian Butterflies, which in the end would turn out to be the game winning card. Gordon, after his 4th land drop finally played a Llanowar Knight. Kwan's Butterflies were then made really angry by Maniacal Rage. Gordon's Knight didn't stay on the table long, as Kwan easily dispatched it with a Flametongue Kavu. 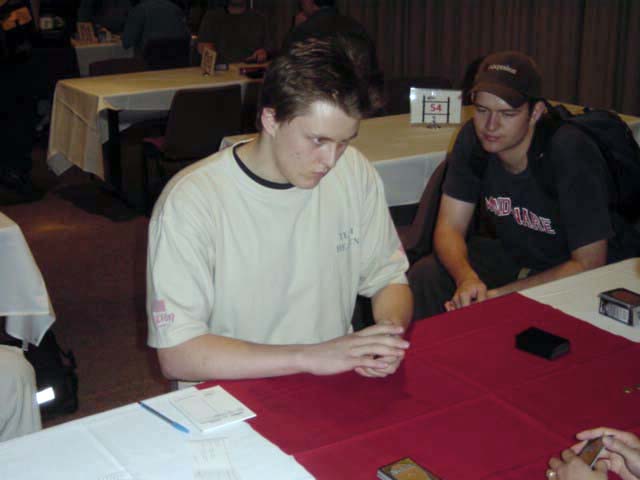 The next 2 turns for Gordon featured 2 Kavu Climbers, stopping Kwan's ground force, but not answering the angry butterflies. Unfortunately for Gordon, he was still looking for a red mana source and the cards drawn from the Kavu Climbers failed to reveal a mountain. Meanwhile Kwan's butterflies slowly chipped away at Gordon's life total. Gordon's last draw before he died to the Butterflies still didn't turn over a mountain, giving the first game to Kwan.

An Obsidian Acolyte was the first non-land permanent that came to the table for Gordon, while Kwan began with a Firebrand Ranger. Gordon turned the Obsidian Acolyte into a beating stick, enhancing it with an Armadillo Cloak. Kwan slowly lost life points to the Acolyte and his only response was to keep Gordon's life total around 20 with the Firebrand Ranger (negating the gain life effect of the Armadillo Cloak). Then, with all of Gordon's land untapped for responses, Kwan attempted to take out the Acolyte with a Flametongue Kavu. With a combination of Gaea's Might and Wax/Wane he managed to keep the Acolyte in play. 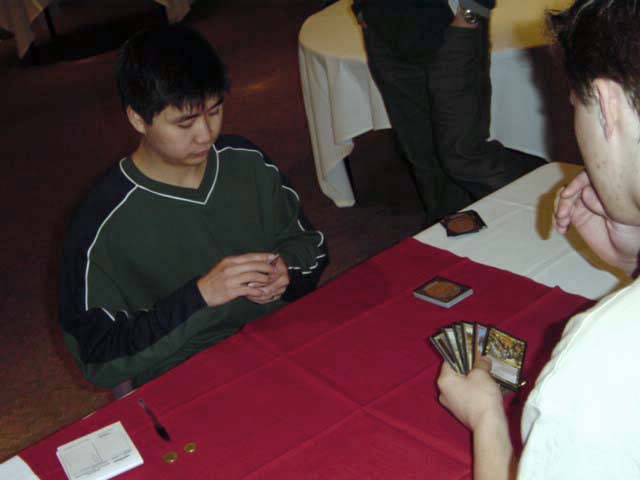 Kwan started to amass an army that forced Gordon to hold back the Acolyte. Finally Gordon sacrificed the Acolyte in combat (with help from Kwan's Scorching Lava) and the path was made clear for Kwan's creatures. At this stage in the game Gordon's life total was still high thanks to the life gained earlier from the Armadillo Cloak. Next Gordon played a Crimson Acolyte, which was taken down immediately by a 1 point Soul Burn. Once again Gordon had no red mana sources available, and when a Pouncing Kavu with kicker came to play for Kwan the game was over.