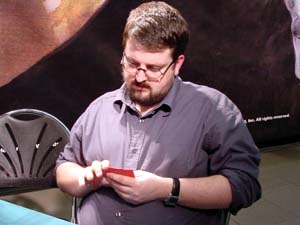 shuffling Antonino asked Pierre what he thinks of the format to which Pierre just shrugged and replies:" I quit playing magic a couple of months ago so I have no clue. I didn't even playtest."

Antonino kicks things off with a first turn Birds of Paradise and second turn Wirewood Symbiote and Vine Trellis, quite a good start.
When Pierre plays a turn 1 Goblin Sledder Antonino comments that the Goblin deck is a good deck to play if you haven't playtested.

On his second turn Pierre thinks for some time and finally decides to cycle a Gempalm Incinnerator targeting the Symbiote. Vernal Bloom comes down on turn 3 for Antonino, which enables him to cast a Triskelion next turn. This is bad news for Pierre since he has just cast a Goblin Warchief and Goblin Sledder. Those creatures died to the Triskelion but after this very explosive start from Antonino he seems to be out of gas.

"This is so unlike me, usually I attack" looking down on his double Vine Trellism double Wood Elves team.

Pierre on the other hand is just doing fine with Goblin Piledriver, Goblin Sledder and a Siege-gang commander. Antonino's last out at the moment is a Tooth and Nail but when he tries "clamp" his Wirewood Symbiote his Skullclamp gets shattered, and so do Antonino's hopes of winning game 1.

In between games Antonino askes if Pierre likes his matcup to which Pierre starts laughing and says: "I have no clue. I draw some cards, I play some cards and I'm winning. People say it's a good matchup though." 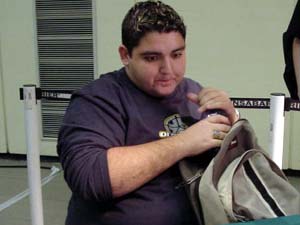 Unlike game 1, things started off a bit slower this game with no turn 1 plays by either player. Again Vernal Bloom comes down turn 3 for Antonino with the help of a Rampant Growth this time. Pierre has a sweet Goblin opener with a Piledriver and a Warchief. Again Antonino did have an answer though in Pyroclasm.
Antonino gets a little aggravated when Pierre is able to rebuild his forces after the clasm and once more the American from Italy fails to draw any business, either Triskelion or Tooth and Nail. A couple of turns later, and some little Elves, the Goblins have taken the match for Pierre Malherbaud.