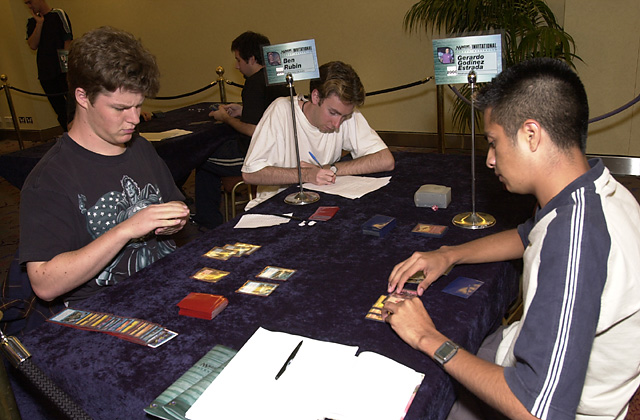 The Counter Phoenix vs. Sligh matchup was common during the Tempest Constructed format and is traditionally a match that is hard for the Sligh mage to win, and this match proved no different. Coming into the match on 3-1 Rubin was pleased with his deck and having won the die roll, he chose to play.

Gaining board control early, Rubin cast a turn 2 Shark, countered Estrada's Lancer and summoned a fourth turn Tradewind. In an attempt to press through some damage, Estrada Kindled the Shark and pinged it with his Fireslinger, summoning a Pup. At the end of the turn, Rubin Intuitioned for 3 Mountains so that he could summon his Phoenix and clear Estradas side of the board. Estrada then drew into the LD part of his deck Pillaging Rubin's 3rd Mountain, rending him unable to return his Phoenix. Estrada then attempted to cast a Phyrexian Warbeast which was Mana Leaked by Rubin. After having his life slowly tick away via attacks by the Tradewind, Estrada chose to hardcast a Fireblast, which Rubin was unable to counter. Rubin then drew into an Intuition only to have his land once again Pillaged. At this stage, both players had no nonland permanents, and Rubin had 1 Mountain, 3 Islands to Estrada's 3 Mountains 3 Wastelands, and no cards in hand. Rubin drew an Allure that allowed him to shut down almost every creature in Estrada's deck. After passing the turn back and forth and laying land, Rubin soon drew into a Whispers of the Muse allowing him to gain massive card advantage. Estrada tried in vein to fill his hand with burn but when Rubin summoned two Mogg Fanatics, could double Counterspell and Whispers with buyback he gave up.

After a long game one, the two players spent some time sideboarding and relaxing before shuffling up the decks and presenting them for game 2.

Estrada began the game with a first turn Pup, however Rubin was ready and summoned a first turn Fanatic. When Estrada attacked with the Pup, Rubin chose to let it damage him, as he knew he could summon a Shark and totally shut down the Mexican's Offense. Rubin's second turn Shark was met with a third turn Pillage on his Island, but Rubin had the perfect response, third turn Island brought out Shark #2 but Rubin left back his Fanatic. When Estrada summoned a Slinger, Rubin seized his opportunity and attacked with the Fanatic and pinged the Slinger after dealing damage. Then down came the Tradewind that looked like a monster to the mana shy Estrada, who had no choice but to sacrifice his two Mountains to kill the Tradewind before it could mana lock him. Staring at two Pups and a Slinger but no lands in play Estrada had no choice but to trade off his Pups for the Sharks, taking 3 damage including the damage inflicted by the Slinger. When Rubin began to Whisper with Buyback and Intuitioned for a Chill Estrada had no choice but to concede having drawn no land.