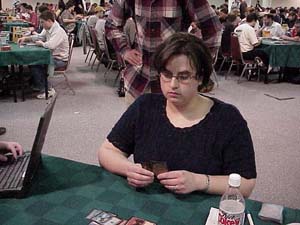 Beth Liston has two Pro Tours to her name, PT Chicago 1998 and PT Los Angeles 2000. Robert Dougherty was on the Champion Your Move Games team for Pro Tour D.C. and has several top 4's in team Grand Prix in his resume. Beth is from Columbus, Ohio; she is in a combined MD and PhD program right now. Rob is the owner of two game stores called Your Moves Games in Boston and Providence. Both players were 4-0 going into this match.

The other feature match for the round was Dan Clegg versus David Williams. Randy Buehler got to the feature match table after me and was forced to cover that match, but he came over to me before the match started and said, "I can't believe you did that to me, Jeff!" He knew that a Dan Clegg match was likely to last a long time while the match that I was covering would end sooner.

The players used Beth's orange D12 to decide who would go first. Robert said, "I like using the twelve sided die because you can see the numbers easily and there is never confusion with the 0 being a ten or a zero."

Beth won the roll with a 12 and decided to draw. Rob kept his opening hand and played a first turn Shivan Oasis. Beth played a mountain on her first turn - she also didn't mulligan. Rob played a swamp, leaving him with 3 possible colors of mana. Beth played an Island second turn and said, Go."

Beth played a fourth turn Island, giving her two Islands and two Mountains. She played a Caldera Kavu and said "Done." Dougherty attacked with both creatures next turn and Beth blocked the Flametongue Kavu. After damage was on the stack, Rob used Rushing River to bounce his Flametongue Kavu, setting himself up to cast it again later if Beth played a creature.

Beth took a few minutes thinking about her next turn. She was in a tough position because she knew Rob had the Flametongue in his hand. She eventually played an Arctic Merfolk. Rob saved the Flametongue for later and used Defiling Tears to eliminate the Merfolk. After an attack with the Grappler, he said done. Rob was now at 20 and Beth was at 11. Things were not looking good for Beth after she said done on her next turn.

When Dougherty attacked with his Grappler, Beth played Magma Burst to destroy it, leaving both players with no creatures in play. Dougherty thought for a few moments then played a Thornscape Battlemage with the black kicker, forcing Beth to discard two cards. She discarded a Recoil and a Pouncing Kavu. It should be noted that Beth still had no black mana in play.

On the next turn Beth drew and played a Swamp and Stormscape Battlemage, only to have it Excluded by Rob. Rob continued his assault, attacking with the Thunderscape Battlemage and playing a Volcano Imp. Beth did nothing on her next turn and Rob attacked again, bringing her to 3 life. Beth passed her turn again, leaving Rob to finish her off with his two creatures. The first game went to Rob Dougherty. 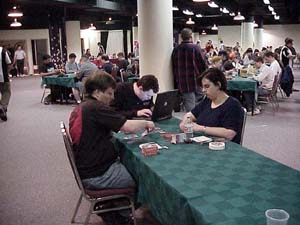 Beth started sideboarding and said, "I choose to draw again." Both players quietly sideboarded for the next game.

When they presented decks, Rob said, "Good luck Beth." Rob looked at his hand and quickly said, "I'll keep it". Beth looked at her hand and said "Keep." as well.

Rob played a second Mountain and Beth discarded a Bog Down. Neither player had yet played a spell. Beth had 2 lands in play and Rob had 5 once he added a third Mountain.

Rob hit hard next turn with a Probe with kicker. This is a devastating spell, especially in this situation. Beth discarded a Sisay's Ingenuity and a Pouncing Kavu. Beth drew a Swamp next turn and played her third land of the game. On his turn, Rob played a Crosis's Catacombs and an Ancient Kavu, the first nonland permanent of the game. Beth did nothing on her next turn and Rob attacked on his. At the end of Rob's turn, she used Recoil to send the Kavu back to Rob's hand. Rob discarded a Mountain to the Recoil's effect.

Beth played her first nonland permanent with a seventh turn Slinking Serpent. Rob replayed his Ancient Kavu and was done. Both players now hand a 3-toughness creature in play. Rob served with his Ancient Kavu and Beth served with her Serpent. Beth played a Stormscape Battlemage, but couldn't afford the kicker because of her mana problems. The players continued trading blows for a couple of turns. Rob used Plague Spores to destroy Beth's Battlemage and a Swamp. Beth was now at 11 life and Rob was at 16.

Rob attacked once more, bringing Beth to 8. Beth drew and played another swamp, but still had not drawn a Mountain, although she had 4 red cards in her hand. She attacked once more with the Slinking Serpent, bringing Rob to 14 life. Rob's next attack took Beth to a dangerous 5 life.

Beth cast Fact or Fiction at the end of Rob's turn. The choices were Thunderscape Familiar, Tsabo Tavoc, Recover and 2 mountains. Rob divided the Mountains into one pile and the other 3 cards into the other pile. Beth had no choice but to take the two Mountains. Beth drew a Swamp next turn and was finally able to have access to enough mana to possibly turn the game around. She considered her next move carefully and played a Magma Burst to destroy the Ancient Kavu. Rob used Defiling Tears to give his Kavu regeneration ability and regenerated it, saving it from the Magma Burst. 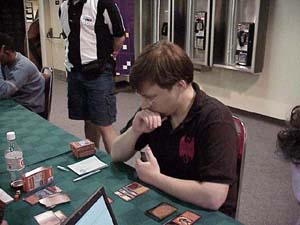 Rob continued his attack next turn and Beth was forced to chump block the Kavu with her Serpent. Beth played a second Mountain and put a Caldera Kavu into play. Rob's hand was pretty amazing at this time and included two Terminates and an Agonizing Demise (which he used on Beth's Kavu during her end phase). Rob finished her off with the Kavu and they immediately shook hands. He said, "Sorry about the mana situation. You had bad mana both games." Rob did acknowledge, "You have to keep those two land hands."

Rob also commented that Beth had a strong deck and should do well in future matches. After the match Rob commented that mana screw was the only bad part of the otherwise amazing game known as Magic.

Rob would now advance in the tournament with a 5-0 record and Beth would continue with a 4-1 record.